Advanced Search
Condoleezza Rice is an American diplomat who served as the 66th United States Secretary of State. Often considered a role model for other African American women striving to reach great professional heights, Rice is the first African American woman to ever hold the position of the United States Secretary of States. A high achiever, she had served as the National Security Advisor during the firm term of President George Bush, becoming the first woman to do so. As a young girl growing up in the racially segregated Alabama, a political career was the last thing on her mind. She was musically inclined from childhood and took classes in ballet and piano with the aim of becoming a professional pianist. However, while at university she realized that she did not have it in her to become a professional musician, and chose to study international politics instead. She became a professor of political science at the Stanford University and was selected the university’s provost owing to her brilliance and strong character. She had always been actively involved in politics and had served as the National Security Advisor before being selected the Secretary of State. American People
Diplomats
Black Leaders
Black Diplomats
Political Leaders
Childhood & Early Life
She was born as the only child of Angelena and John Wesley Rice, Jr. Her mother was a high school teacher while her father was a high school guidance counselor and Presbyterian minister. She was raised in a racially segregated section of Alabama.
She began to learn music and ballet at the age of three. As a teenager, she received piano lessons and aimed to become a concert pianist.
She attended St. Mary’s Academy, an all-girls Catholic high school and graduated in 1971.
She studied piano at the Aspen Music Festival and School before enrolling at the University of Denver. While there she realized that she was not talented enough to be a professional pianist and instead chose to study a course on international politics taught by Josef Korbel. She earned her B.A., cum laude, in political science in 1974.
She then went to the University of Notre Dame from where she received her master’s degree in political science in 1975. She completed her Ph.D. in political science from the Josef Korbel School of International Studies at the University of Denver in 1981. 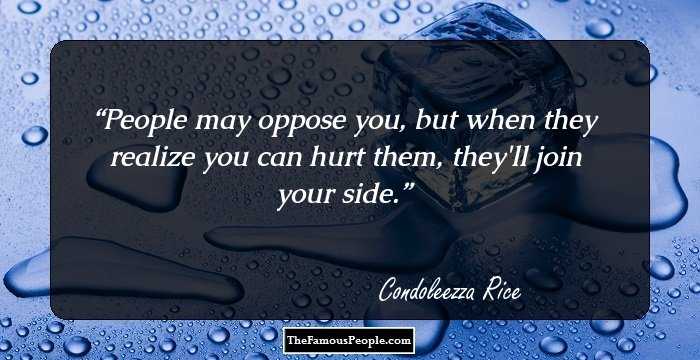 Quotes: You
Continue Reading Below
Career
She was appointed as an assistant professor of political science in the Stanford University in 1981 and was promoted to associate professor in 1987. She held this post till 1993.
During the late 1980s she became the Soviet expert on the United States National Security Council under Brent Scowcroft who was the National Security Advisor.
She was a very intelligent and determined young woman and was made the Provost of Stanford University in 1993, making her the first female and the youngest Provost in Stanford history. In this post she was responsible for managing the university's multi-billion dollar budget.
She took a one-year leave of absence from Stanford University to help George Bush as a foreign policy advisor during his 2000 presidential election campaign.
She was made the National Security Advisor in December 2000. She left Stanford to accept this position. She helped Bush craft race-based preferences in university admission policies.
She supported the invasion of Iraq by America in 2003 after Iraq declared its weapons of mass destruction to the United Nations. She became the first National Security Advisor to campaign for an incumbent president during the 2004 presidential election.
Bush nominated Rice to be Secretary of State in November 2004. The Senate confirmed her nomination by a vote of 85-13 in January 2005. She initiated many diplomatic efforts on behalf of the Bush government during her tenure as the Secretary of State.
She worked for the expansion of democratic governments and advocated that the U.S. should advance democratic reforms throughout the Middle East. She was a strong supporter of ‘Transformational Diplomacy’ to maintain security, fight poverty and establish democratic reforms.
She traveled widely as the Secretary of State and visited 83 countries all over the world. She holds the record for the maximum miles traveled by someone holding her position. She stepped down in 2009 at the end of the Bush Administration and rejoined the academia.
Continue Reading Below
She returned as a professor of political science to Stanford in 2009. She is also the Thomas and Barbara Stephenson Senior Fellow on Public Policy at the Hoover Institution. 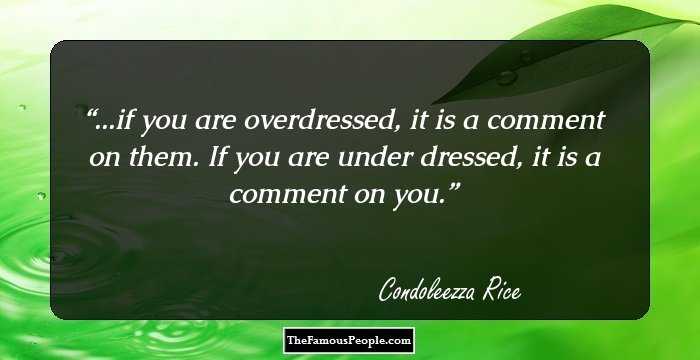 Quotes: You
Major Works
She served as the 66th Secretary of State of the United States from January 2005 to January 2009—the first African American woman to hold the post. She is famous for pioneering the policy of Transformational Diplomacy aimed at bringing about democratic reforms in countries especially in the Greater Middle East.
Awards & Achievements
She was presented with the U.S. Senator John Heinz Award for Greatest Public Service by an Elected or Appointed Official in 2003 by Jefferson Awards.
She received the U.S. Air Force Academy's 2009 Thomas D. White National Defense Award for contributions to the defense and security of the United States in 2010. 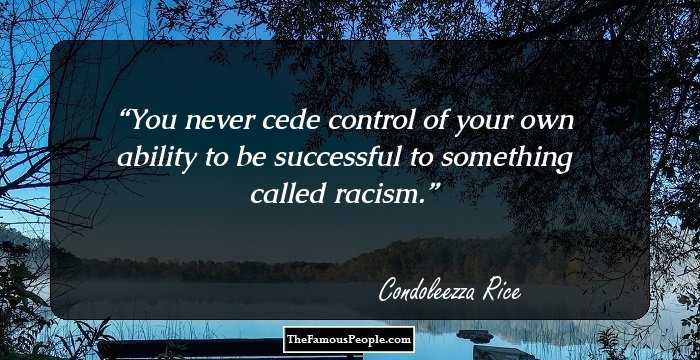 Quotes: You, Never
Personal Life & Legacy
She was once briefly engaged to American football player Rick Upchurch in the 1970s. She broke off the relationship.
She never married and does not have any children.
Trivia
She is an accomplished pianist and has performed at diplomatic events at embassies.
The ‘Forbes’ magazine named her ‘The most powerful woman in the world’ in 2004 and 2005.
Recommended Lists:
Miscellaneous #114
Intellectuals & Academics #149
Leaders #153

Quotes By Condoleezza Rice | Quote Of The Day | Top 100 Quotes

See the events in life of Condoleezza Rice in Chronological Order