Colin Andrew Firth is an award winning actor best known for portraying King George VI in ‘The King’s Speech’ which won him an Academy Award along with several other honours. Blessed with broad shoulders, square face and an air of quiet dignity, Firth seems to the perfect man to play the leading male in period dramas. He loved acting from childhood and attended drama workshops from the time he was ten. By the time he was a teenager, he just knew that he had to pursue acting as a profession. Deciding not to pursue academic studies, he joined the National Youth Theatre where he made several acquaintances who would help him in his future career. In spite of his good looks and talent, success did not come easy to him. He started acting in stage productions and television during the 1980s though it would be years before he became a famous name. He finally got his breakthrough when he was selected to play Mr. Darcy in the television adaptation of Jane Austen’s ‘Pride and Prejudice’. The show was a big hit both in the U.S. and U.K. and established him as a television star. Films like ‘The English Patient’ and ‘Bridget Jones’s Diary’ made him an acclaimed film star as well. British People
British Men
Tall Celebrities
Tall Male Celebrities
Virgo Actors
Childhood & Early Life
He was born in England to parents Shirley Jean and David Norman Firth. His mother was a comparative religion lecturer while his father was a history lecturer. As a young child he lived in Nigeria where his parents worked before returning to the U.K.
He attended the Montgomery of Alamein Secondary School on his return to U.K. where he found it hard to fit in. He was constantly bullied by his classmates because of which he lost his interest in studies.
He loved acting from a young age and started attending drama classes when he was ten. He decided to become a professional actor when he was 14.
He spent two years at the Barton Peveril Sixth form college where he developed a love for English literature. However, he did not stay in the college for long and joined the National Youth Theatre in London. 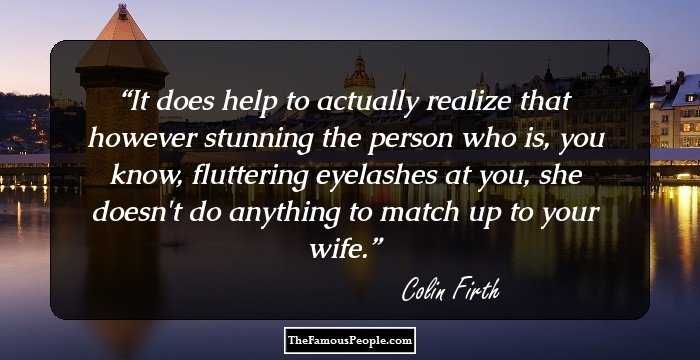 Quotes: You
Continue Reading Below
Career
His first job was in the wardrobe department at the National Theatre. After this stint, he went to study at the Drama Centre London where he started appearing in stage productions.
He played Hamlet in the Drama Centre’s production for which he got noticed by the playwright Julian Mitchell who cast him as Tommy Judd in the stage production ‘Another Country’ in 1983. He forayed into films by reprising the same role in the film adaptation of the play in 1984.
In 1988, he portrayed the real-life soldier Robert Lawrence in the BBC drama ‘Tumbledown’ which was about the story of a brave soldier who is severely injured at the Battle of Mount Tumbledown. His role was highly acclaimed.
His breakthrough role happened in 1995. He was selected to play the haughty aristocrat Mr. Darcy in a television adaptation of Jane Austen’s ‘Pride and Prejudice’ which finally got him the fame he deserved. This role catapulted him to the status of a sex symbol.
He played Lord Wessex in the 1998 romantic comedy drama ‘Shakespeare in Love’ that tells of a love affair involving Shakespeare while he was writing a play. It is a fiction though there are numerous references to the life of the real-life playwright.
He was afraid of being typecast as an aloof sex symbol due to the popularity he received by portraying Mr. Darcy and wanted to choose different types of roles. However, it was a fate he could not escape and was again cast as a brooding and cold hunk in the film adaptation of ‘Bridget Jones’s Diary’ in 2001.
He was part of the ensemble cast of the Christmas-themed film, ‘Love Actually’ in 2003 which explored the different aspects of love shown through ten interwoven stories.
The year 2009 was a remarkable one for him. In Tom Ford’s directorial debut, Firth played a gay professor who has been depressed since the death of his lover eight years ago. He won several awards for this role.
He played King George VI in the epic historical drama, ‘The King’s Speech’ in 2010. The story revolves around how King George copes with a stammer and tries to overcome it.
Continue Reading Below
Currently, the busy actor is working on several films like ‘Magic in the Moonlight’, ‘Before I Go To Sleep’, and ‘The Secret Service’ which are scheduled for release. 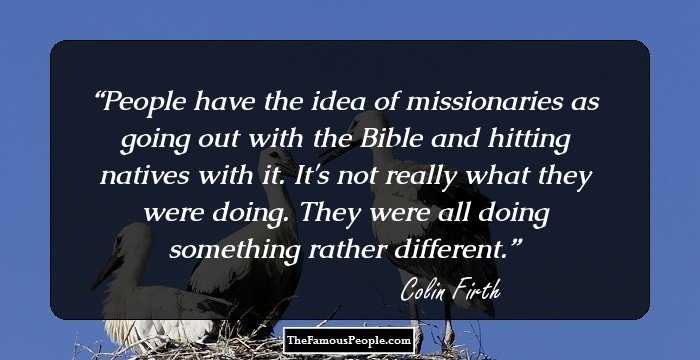 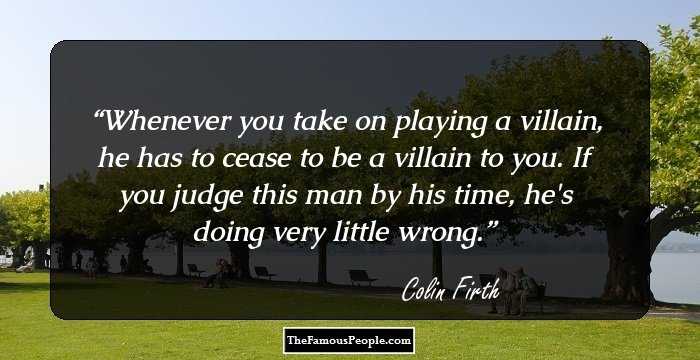 Quotes: You, Time
Personal Life & Legacy
He was romantically involved with actress Meg Tilly from 1989 and had a son with her. The couple broke up in 1994.
He married Italian film producer Livia Giuggioli in 1997. The couple has two sons.
He supports several charities and non-governmental organizations. He has been involved since long with Survival International, an NGO that supports the rights of tribal people. He also supports Refugee Council.

Quotes By Colin Firth | Quote Of The Day | Top 100 Quotes

See the events in life of Colin Firth in Chronological Order