Christina Hendricks is an American actress who is best known for her portrayal of Joan Holloway in the seven seasons of the AMC's period drama series Mad Men (2007-2015). Her work in the series won her critical appreciation and six Emmy award nominations in the best supporting actress category. In her career till now, which spans over two decades, she has also become known for her work in the legal drama Kevin Hill, comedy series Another Period, crime drama series Tin Star and comedy-crime series Good Girls. In films, she is noted for her performance in Drive, Ginger & Rosa, Lost River, The Neon Demon, The Strangers: Prey at Night, Egg and American Woman. She has also lent her voice in animation films like From Up on Poppy Hill, Toy Story 4 and Scoob!. Earlier, she began her career as a model and continued with it for a long time before making her acting debut on television with the anthology series Undressed in 1999. Her first substantial role came in the comedy drama series Beggars and Choosers following which she also received appreciation for her role in the cult hit Firefly. In 2010, she was voted the sexiest woman in the world and the Best-Looking Woman in America by Esquire magazine. Nicola Peltz
Actresses #246
Film & Theater Personalities #592
Continue Reading Below
DID WE MISS SOMEONE?
CLICK HERE AND TELL US
WE'LL MAKE SURE
THEY'RE HERE A.S.A.P
Quick Facts

Christina Hendricks was born on 3rd May 1975 in Knoxville, Tennessee, U.S, to Jackie Sue Hendricks and Robert Hendricks. She has an older brother.

Her mother, an American, was a psychologist while her father originally from Birmingham England, was employed at the U.S. Forest Service.

Her father’s job required the family to move quite frequently. First, they resided in Georgia, then moved to Portland, Oregon followed by Twin Falls, Idaho. They finally moved to Washington, D.C and settled in Fairfax, Virginia.

She started her elementary schooling in Portland, Oregon and completed it as well as her middle school education in Twin Falls, Idaho. She then attended Fairfax High School but left it in senior year to join a local community college from where she eventually completed her education.

While in Idaho, she became a part of the local theatre group and appeared in the production of Grease. She took part in drama even in Fairfax High School. 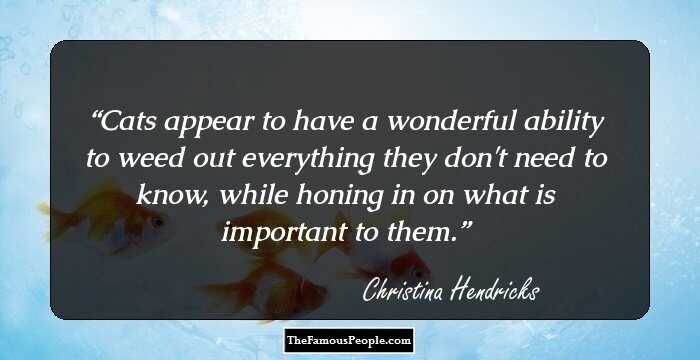 After completing her high school education, Christina Hendricks took up a job as a receptionist and shampoo girl at a salon.

Her modelling career began when her mother convinced her to participate in the Seventeen magazine modelling contest to appear on its cover. Though she failed to win the contest, it did spark in her an interest in modelling. After a year of modelling locally, she moved to New York City at the age of 18. She continued modelling till the age of 27.

In 1997, she starred in the music video for rock band Everclear's song One Hit Wonder.

In 1999, she appeared in the television commercials for Mazda, Carl's Jr., Dr. Pepper, and Clean & Clear Strips. The same year, she became a hand model for the now-iconic poster of the black comedy drama film American Beauty.

In 1999, she also made her screen acting debut on television with the MTV’s anthology series Undressed. The year also saw her in a pilot episode of another series Sorority.

In 2000, she got her first substantial role (19 episodes) in the critically acclaimed Showtime comedy drama series Beggars and Choosers wherein she was cast in the role of Kelly Kramer.

In between, in 2004-2005, she was seen in another substantial role in the critically acclaimed legal drama series Kevin Hill (22 episodes).

In 2007, she portrayed for the first time the role of Joan Holloway in AMC's period drama series Mad Men. Her fine performance over the seven seasons (2007–2015) of the show solidified her acting career and also won her six Emmy nominations (Best Supporting Actress category).

The year 2007 also saw Christina Hendricks making her feature film debut with the romantic drama film La Cucina. Another of her film – South of Pico – released the same year and was hailed at numerous international film festivals.

In 2010, she was seen in the music video of the American-indie rock band Broken Bells’s song The Ghost Inside

The period also saw her lending her voice to the direct-to-DVD American superhero film All-Star Superman (2011), the Japanese animated drama film From Up on Poppy Hill (2011 English version) and the American 3D animated computer animated fantasy film The Pirate Fairy (2014).

The year 2011 saw her acting on stage too in Stephen Sondheim's musical Company and lending her voice and likeness to the character Sam Harper in the racing video game Need for Speed: The Run. On television, she acted and did voiceover in an episode each of Body of Proof and American Dad!

Since 2015, her significant film credits include the neo-noir mystery Dark Places (2015), the psychological horror film The Neon Demon (2016), the slasher thriller The Strangers: Prey at Night, the comedy Egg and the drama American Woman (all three 2018).

Additionally, she lent her voice to the character of Gabby in the computer-animated comedy drama Toy Story 4 (2019) and Officer Jaffe in the computer animated mystery comedy film Scoob! (2020)1. 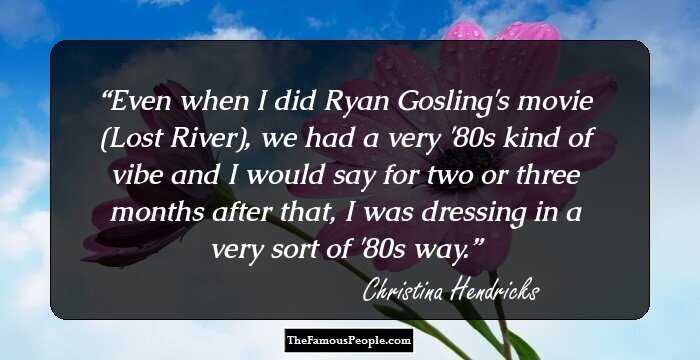 Christina Hendricks married actor Geoffrey Arend in 2009; however, the two got divorced in 2019.

Quotes By Christina Hendricks | Quote Of The Day | Top 100 Quotes

See the events in life of Christina Hendricks in Chronological Order