Advanced Search
Christina Applegate is an award winning American actress and dancer. She played one of the main roles in the American situational comedy series ‘Married… With Children’, for which she gained much fame. The show, which aired for ten years, earned huge popularity throughout the US, and was also later broadcast in several other countries. She played a guest role in the famous American situational comedy series ‘Friends’. Her role won her an Emmy Award. She also earned nominations for the Golden Globe and the Tony Award. Applegate has appeared in several movies as well. She was seen in main roles in movies, such as ‘Grand Theft Parsons’ and ‘Vacations’. Her most recent works on the big screen include a main role in the comedy film ‘Crash Pad’ and a cameo role in the film ‘A Bad Mom’s Christmas’. She is also involved with several charitable organizations. As a breast cancer survivor, she has been promoting breast cancer awareness for quite some time. She is a vegetarian and supports PETA’s anti fur campaign and ‘World Animal Protection’. American People
American Women
California Actresses
American Actresses
Sagittarius Actresses
Childhood & Early Life
Christina Applegate was born on November 25, 1971 in Hollywood, California, in the US. Her father Robert William Applegate was a record producer as well as a record company executive, while her mother Nancy Lee Priddy is a singer and actress. Shortly after her birth, her parents separated. Her father married again, and through this marriage, Applegate has two half-siblings named Alisa and Kyle.
Her acting career began at an early age. She made her TV debut in the soap opera ‘Days of Our Lives’ as a baby and made her film debut at the age of seven in the film ‘Jaws of Satan’.
Her first television movie was the biopic of Grace Kelly where she portrayed a younger version of Kelly. She was also seen in guest roles in shows such as ‘Father Murphy’ and ‘Silver Spoons’. She played a recurring role in ‘Heart of the City’ from 1986 to 1987. 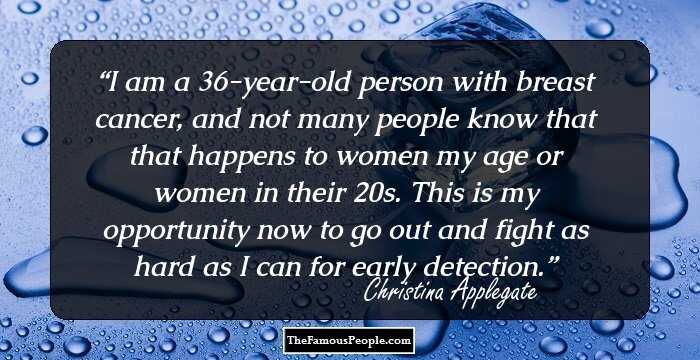 Continue Reading Below
Career
Christina Applegate first gained attention for her role of a sexually promiscuous character named Kelly Bundy in the popular American TV series ‘Married… with Children’. The show aired from 1987 to 1997. Applegate won a ‘Young Artist Award’ and a ‘TV Land Award’ for her performance in the series.
Her early works on the big screen include ‘Streets’ (1990), ‘Don’t Tell Mom the Babysitter’s Dead’ (1991) and ‘Vibrations’ (1995). She played a supporting role in the famous 1996 sci-fi horror film ‘Mars Attack’. The film was directed by Tim Burton and was a commercial success. It also earned several awards and nominations.
She played the role of a 12th century noblewoman in the 2001 comedy film ‘Just Visiting’. The film was a commercial disaster and was met with negative reviews from critics.
She next appeared in films such as the crime drama film ‘Wonderland’ and the film ‘Grand Theft Parsons’ which was based on the true story of a country rock musician named Graham Parsons. She was also seen in the 2004 film ‘Employee of the Month’ in a main role.
Applegate co-produced and played the lead role in the comedy series ‘Jesse’. It aired from 1998 to 2000. She played a guest role in the popular American series ‘Friends’ in 2002, for which she won an Emmy Award.
From 2007 to 2009, she played the lead role in the situational comedy series ‘Samantha Who?’ She earned another Emmy nomination for her role, as well as a nomination for the Golden Globe.
She has appeared in several stage productions as well, such as ‘The Axeman’s Jazz’, ‘Nobody Leaves Empty Handed’, and ‘The Runthrough’. She made her Broadway debut in the musical ‘Sweet Charity’, for which she won the Theatre World Award as well as earned a Tony Award nomination.
She continued her career on the big screen with main as well as supporting roles in films, such as ‘Alvin and the Chipmunks: The Squeakquel’ (2009), ‘Going the Distance’ (2010), ‘Anchorman 2: The Legend Continues’ (2013), ‘Vacation’ (2015), ‘Bad Moms’ (2016) and ‘Crash Pad’ (2017).
From 2011 to 2012, she co-produced and appeared in the series ‘Up All Night’. Her most recent work on television was in 2015 in an episode of the comedy TV series ‘The Grinder’.
Continue Reading Below 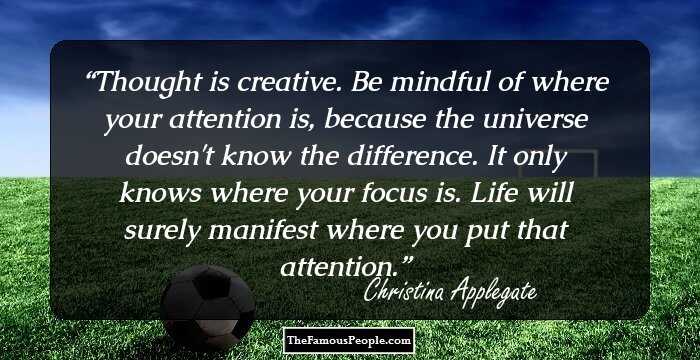 Major Works
‘Married… With Children,’ a popular American situational comedy series that aired from 1987 to 1997 on the Fox Network, can be considered the most significant and popular work in Christina Applegate’s career. Other actors who starred in the series include Ed O’Neill, Katey Sagal, David Garrison and Amanda Bearse. The story revolved around the lives of Al Bundy, a shoe salesman and a former high school footballer, his obnoxious wife Peggy, and their children Kelly and Bud.
‘Samantha Who?’ is an American situational comedy series where Applegate played the lead role. She portrayed the vice president of a real estate firm who develops retrograde amnesia due to an accident. She realizes that she was a selfish and dislikable person prior to the accident and therefore, makes efforts to improve herself as a person. The show received good ratings in the first season, but since the ratings fell during the second season, it had to be eventually cancelled.
Awards & Achievements
Christina Applegate has won several significant awards in her career. These include the Emmy Award for her role in the TV series ‘Friends’ in the category of ‘Outstanding Guest Actress in a Comedy Series’ in 2003. She has been nominated for two Golden Globes as well for her lead roles in the shows ‘Jesse’ and ‘Samantha Who?’
She earned a nomination for the Tony Award as well as won the World Theatre Award for her role in the musical ‘Sweet Charity’. 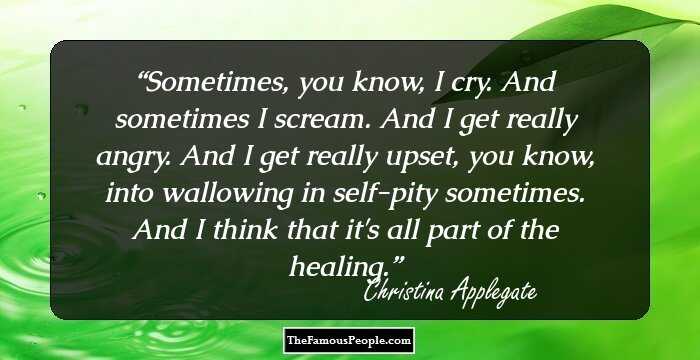 Personal Life
Christina Applegate married Johnathon Schaech in 2001. The marriage was not a happy one and she filed for divorce in 2005.
Later she started dating Martyn LeNoble. The couple had a daughter Sadie Grace, born in 2011. They tied the knot in 2013.
Applegate was diagnosed with breast cancer in 2008, which she survived after going through a double mastectomy and by switching to a healthier diet. Since then, she has been promoting breast cancer awareness.
As a philanthropist, Christina Applegate has been involved with several organizations such as ‘Entertainment Industry Foundation,’ ‘Adopt-A-Classroom,’ and ‘World Animal Protection’.
She also founded ‘Right Action for Women’ which is a charitable foundation dedicated for combating breast cancer. Applegate is a vegetarian and is involved with PETA and its campaign against fur.

Quotes By Christina Applegate | Quote Of The Day | Top 100 Quotes

See the events in life of Christina Applegate in Chronological Order