Advanced Search
Christian X was the king of Denmark for nearly 35 years from 1912 to 1947. He had the unique distinction of being the only king of Iceland as well. He was also unique in another way as he was the first monarch to have been born into the Danish royal family ever since Frederick VII. He was part of the House of Glucksburg. He has been described as someone who was a complete authoritarian and had always stressed the importance of royal power and dignity. His non-adherence to democracy led to the infamous Easter Crisis of 1920 in which the elected Social Democrats were overthrown and were replaced by those chosen by Christian X himself. His decision was opposed vehemently and massive demonstrations were undertaken on the streets by the Social Democrats which instilled a fear in him that monarchy would be overthrown eventually. He finally relented and agreed to the fact that a monarch like him could not appoint a government without the agreement of the parliament. He rose to prominence during the German invasion of Denmark when he used to roam around the streets of Copenhagen without any guards protecting him. He became a symbol of resistance as Denmark valiantly opposed the German rule under his reign. He was also part of both the world wars and ultimately became one of the most popular Danish kings to have ever lived. George I of Greece
DID WE MISS SOMEONE?
CLICK HERE AND TELL US
WE'LL MAKE SURE
THEY'RE HERE A.S.A.P
Quick Facts

Danish Celebrities
Danish Emperors & Kings
Danish Historical Personalities
Libra Men
Childhood & Early Life
Christian was born at the Charlottenlund Palace in Copenhagen on 26th September 1870, when his paternal grandfather, Christian IX, was ruling. His parents were Crown Prince Frederick of Denmark and Louise of Sweden, who was the only child of King Charles XV of Sweden to survive.
Christian was baptized at the Chapel of Christiansborg Palace on 31st October 1870. The baptism was conducted by Hans Lassen Martensen, who was the bishop of Zealand.
In 1889, he passed the studenter-eksamen, the entrance examination for universities in Denmark. He was the first Danish monarch to do so. He soon started his military education, a custom followed by the princes of that period. He also served in the 5th Dragoon Regiment. He later went on to study at the Officers Academy in Randers.
Continue Reading Below
Accession & Reign
When Christian’s father, King Frederick VIII, died suddenly on 14th May 1912, Christian was in Nice, France, enjoying a peaceful vacation. Upon hearing the news, he rushed to Copenhagen and ascended the throne as King Christian X of Denmark.
The first major incident associated with him was the Easter Crisis of 1920 where he overthrew the democratically elected Prime Minister Zahle and other members of the cabinet. He did this because Zahle did not listen to his request of including the city of Flensburg in Denmark instead of letting it to Central Schleswig whose people wanted the entire region to be ruled by the Germans.
The dismissal of the cabinet members led to various demonstrations across the entire country opposing the king’s decision. In fear of the monarchy being completely abolished, Christian X dismissed the government he had formed and replaced it with a group of cabinet members to form a compromise government till the new cabinet was elected in the following year.
The next major incident happened during 1940 when the Germans invaded Denmark in a surprise attack. The attack happened at 4 am in the morning of 9th April. Christian X of Denmark and the entire government capitulated to the German attack as he was sure that the small Danish army was no match for the mammoth German army. However, he negotiated successfully with the Germans for political independence in domestic matters.
Unlike the other kings and queens from nearby European countries, Christian X of Denmark did not go into an exile after capitulating to the Germans. Instead, he stayed back with his people and became a symbol of a national cause.
During the first two years of German occupancy, Christian took daily rides across the streets of Copenhagen on a horse without being accompanied by any guards. This showed the resilience of the Danish people to German rule.
The Telegram Crisis of 1942 was another important incident that happened during the reign of Christian X. In this instance, a curt reply by Christian to a congratulatory message from Hitler led to chaos in the German camp. Hitler was enraged by this and sacked the Danish ambassador in Germany in response.
Christian X of Denmark was also made the king of Iceland and was, in fact, the only monarch to have ever ruled over the sovereign of Iceland. Owing to the accession of the Danish-Icelandic Act of Union in 1918, Christian automatically became the king of Iceland as well since he was the ruler of Denmark during that time. This rule ended in 1944 when Iceland decided to end all ties with Denmark and become a republic in itself.
Family & Personal Life
Christian X of Denmark got married to Alexandrine of Mecklenburg-Schwerin on 26th April 1898, in Cannes. Alexandrine was the daughter of the Grand Duke of Mecklenburg-Schwerin Frederick Francis III. Her mother was Anastasia Mikhailovna, a Grand Duchess from Russia.
Christian and Alexandrine had two sons – Prince Frederick, who was born 1899 and Prince Knud, who was born in 1900. They lived in the Amalienborg Palace in Copenhagen which became their main residence, while the Sorgenfri Palace in the north of Copenhagen became their summer residence.
Their other residences included the Marselisborg Palace in Aarhus which was a wedding gift from the residents of Denmark in 1898 and the villa Klitgarden which was built by the king himself in Skagen.
Death & Legacy
During one of his daily rides, Christian X of Denmark fell down from his horse and suffered injuries that had a lasting impact on his health. He became more or less invalid for the remaining part of his life. He died peacefully on 20th April 1947, at the Amalienborg Palace in Copenhagen. After his death, his coffin was decorated with an armband symbolizing the Danish resistance movement.
There are various urban legends associated with Christian X. One of them is related to his reported protection of the Danish Jews in 1942. Danish Jews were not required to wear the Star of David and Christian threatened to wear the Star of David himself if the Jews were forced to do so.
Trivia
Christian X has an area in Greenland named after him: King Christian X Land.

See the events in life of Christian X in Chronological Order 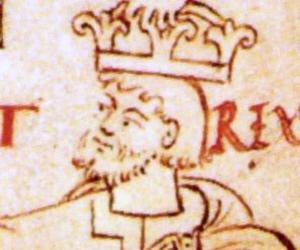