Who is Chris Matthews?

Christopher John “Chris” Matthews is famous for his blunt and outspoken ways of interviewing. He is a political commentator, widely respected for his in-depth knowledge of politics and is best known as the host of the highly popular talk show, ‘Hardball with Chris Matthews’. Energetic and lively, he is much loved by his audiences for his fearlessness and the ability to effortlessly extract valuable pieces of information from the people he interviews. He calls himself a devout Roman Catholic and his religion plays an important role in shaping his thoughts. He is an independent thinker and does not deem it necessary to singularly support any one partisan view because of which he has been accused of being both too liberal and too conservative. The son of a court reporter, he developed an early interest in politics. After graduating in economics, he tried running for the Congress albeit unsuccessfully. He began his career working as a policeman with the United States Capitol Police and gained patronage with several politicians. He went on to serve as the speechwriter for President Jimmy Carter and also handled public relations. Eventually he became a news anchor and political commentator and produced several critically acclaimed news programs. Newspaper Columnists
American Men
College Of The Holy Cross
University Of North Carolina At Chapel Hill
Childhood & Early Life
He was born to Herb Matthews and his wife Mary Teresa. His father worked as a court reporter which instilled in him a love for reporting. He was very close to his grandfather, a Democratic Committeeman who encouraged the young boy’s interest in politics.
He attended La Salle College High School, a small Catholic high school, before moving on to the College of Holy Cross from where he graduated in 1967.
He decided to do graduate work in economics at the University of North Carolina. However, he dropped out in 1968. 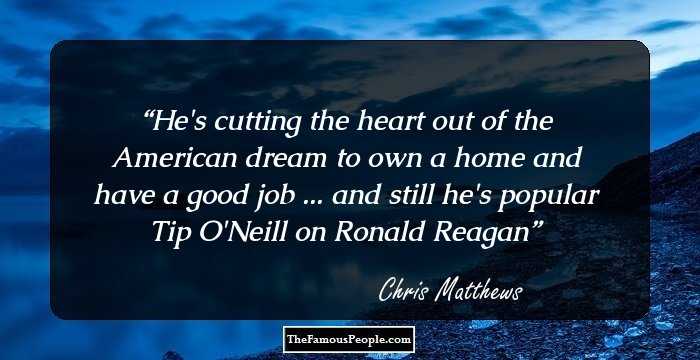 Quotes: Home, Heart
Continue Reading Below
You May Like

Tall Celebrities
Tall Male Celebrities
Male Tv Anchors
Male Journalists
Career
After leaving university in 1968 he served in the United States Peace Corps in Swaziland till 1970 as a trade development adviser.
He wanted to enter into politics and ran for the Congress representing northeastern Philadelphia. He lost and had to look for another job. Thereafter he joined the United States Capitol Police as an officer.
When Jimmy Carter became the president of the U.S., he became a speechwriter for him. Following this he worked on the staffs of the Senators Frank Moss and Edmund Muskie.
His close dealings with high profile politicians made him very knowledgeable about politics and rekindled his political ambitions. In 1981 he was made the chief of staff to speaker of the House Thomas “Tip” O’Neill. He is credited to have had a great influence on the speaker.
He entered print journalism after O’Neill’s retirement in 1987. He joined ‘The San Francisco Examiner’ as a columnist the same year and worked there for the next 13 years till 2000. He worked as the nationally syndicated columnist for ‘The San Francisco Chronicle’ for two years after this.
During his stint as a print journalist he covered several events of historic importance including the fall of the Berlin Wall, the first all-races elections in South Africa, and the Good Friday Peace Talks in Northern Ireland. This made him a very popular journalist and soon he got offers to appear on television.
His first book, ‘Hardball: How Politics Is Played, Told by One Who Knows the Game’ was published in 1988. His future television show of the same name was to be based on this book.
He began his own talk show, ‘Hardball with Chris Matthews’ in 1997. It was a talking-head style show where the moderator opens up a wide range of topics on politics which is discussed with a panel of guests.
In 2002 he began hosting a half-hour weekend political program, ‘The Chris Matthews Show’, produced by NBC News. He served as the moderator of the program and would discuss political news with a rotating group of four journalists.
Continue Reading Below
He is also the author of several best-selling books which include ‘Kennedy & Nixon: The Rivalry That Shaped Postwar America’ (1996), ‘America, Beyond Our Greatest Notions’ (2002),) and ‘The Hardball Handbook: How to Win at Life’ (2009).
As an outspoken journalist, he has had his moments of controversy as well. He has been criticized in the past for his thoughtless comments on Hillary Clinton and Barrack Obama. However, he has always been prompt in offering his apologies whenever he has been criticized. 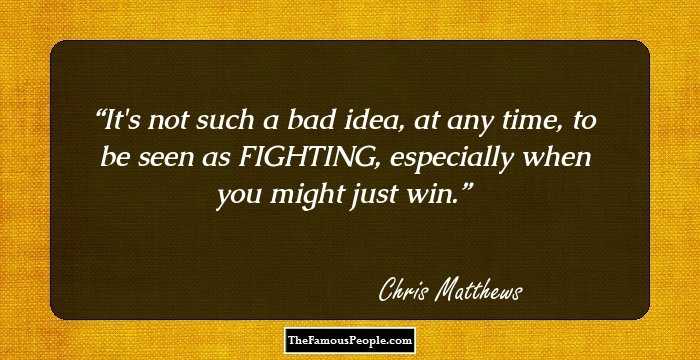 American TV Anchors
American Journalists
Male Media Personalities
American Media Personalities
Major Works
He is the author of the book ‘Hardball: How Politics Is Played, Told by One Who Knows the Game’, which became a best-selling book and led to the creation of the highly successful television show, ‘Hardball with Chris Matthews’.
Recommended Lists:

American Newspaper Columnists
Sagittarius Men
Awards & Achievements
He won the David Brinkley Awards for Excellence in Broadcast Journalism in 2004.
He was presented with the prestigious Pennsylvania Society's Gold Medal for Distinguished Achievement in 2005. 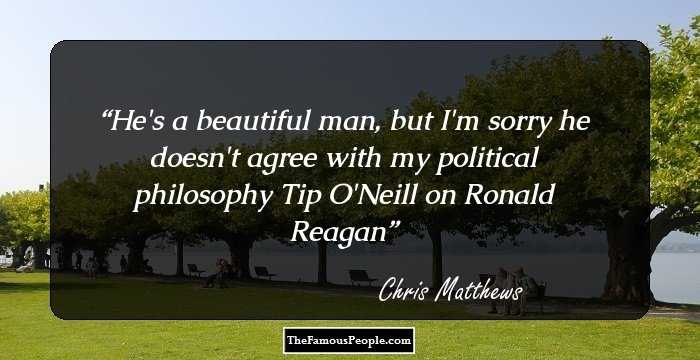 Quotes: Beautiful
Personal Life & Legacy
He has been married to the award winning news anchor Kathleen Matthews since 1980. The couple has three children.
He suffers from diabetes and other health problems.
Trivia
This famous political commentator predicted that he had "just seen the first black president” when he met Barack Obama at the Democratic National Convention in 2004.
Recommended Lists:
Media Personalities #595
You May Like

See the events in life of Chris Matthews in Chronological Order