Carson McCullers, the author of the celebrated piece of fiction ‘The Heart is a Lonely Hunter’ was born as Lula Carson Smith. The author is notable for writing several novels, plays, and short stories which are known for their high literary standards. As a young girl, Lula wanted to become a musician and received piano lessons from the age of ten. She also had plans to enroll at the prestigious Juilliard School of Music in New York City. However a bout of rheumatic fever while she was a teenager forced her to rethink her career options. Her father bought her a typewriter and the youngster started writing stories to pass time during her recovery. She later attended creative writing classes and started writing seriously by the time she was in her late teens. Unfortunately, she was always plagued by health problems from an early age. Long periods of convalescence, however, proved to be the inspiration behind her writing—she began writing her first novel ‘The Heart Is a Lonely Hunter’ while she was recovering from a respiratory illness. The novel which explores the story of a deaf man was a literary sensation and a best seller. The book was also adapted into a film of the same name later on. American Celebrities
Novelists
Short Story Writers
American Women
Juilliard School
Childhood & Early Life
She was born as the daughter of Lamar Smith, a watchmaker and jeweler, and his wife Vera Marguerite Waters.
As a little girl, She aspired to be a musician and her parents arranged for her to receive piano classes form the age of ten. She attended Columbus High School.
She traveled to New York City where she planned to study piano at the Julliard School of Music in 1934. However, she returned home and fell ill with rheumatic fever. The illness left her unable to pursue a career as a professional musician and she was forced to consider other professions.
She studied creative writing at night classes at Columbia University under the Texas writer Dorothy Scarborough. 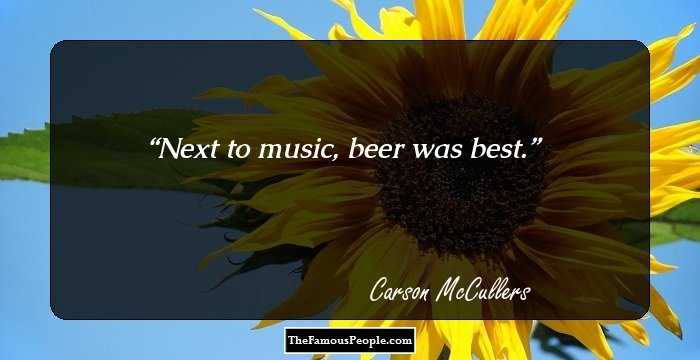 The Hottest Male Celebrities With The Best Abs
Career
She began writing seriously by her late teens. Her first published work was an autobiographical piece called ‘Wunderkind’ which was about a musical prodigy’s painful life experiences. The story first appeared in the December 1936 issue of ‘Story’ magazine.
For two years from 1935 till 1937, she divided her time between Columbus and New York in order to work on her studies and writing. She also worked at several odd jobs to support herself.
She published her debut novel ‘The Heart is a Lonely Hunter’ in 1940. The story revolved around a deaf man named John Singer and the various people he meets in a mill town. The novel was highly reviewed by critics and was also a huge commercial success.
The very next year, the novel ‘Reflections in a Golden Eye’ was released. The novel had first appeared in a serialized format in the October-November issues of the ‘Harper’s Bazaar’ in 1940. The book dealt with issues such as homosexuality, sadism and fetishism.
It took her five years to complete her next novel ‘The Member of the Wedding’ which was finally published in 1946. The plot revolved around the story of a 12 year old tomboy, Frankie Addams who feels disconnected from the world. The novel explores the psychology of the three main characters.
The theatrical adaptation of the novel ‘The Member of the Wedding’ opened on Broadway in 1950. The play was hugely popular and ran for 501 performances. This adaptation was a critical and well as commercial success.
One of her most famous works, ‘The Ballad of the Sad Caf�’, a collection of short stories was out in 1951. It included a novella of the same name which was about a strong headed woman named Amelia Evans. Love, isolation, loneliness and gender roles form the basis of this novel.
She always suffered from poor health and her health declined steadily during her later years affecting the quality of her literary output as well. Her second play, ‘The Square Root of Wonderful’ did not do well and closed after just 45 performances on the Broadway in 1957. Her final novel, ‘Clock Without Hands’ (1961) was also not much successful. 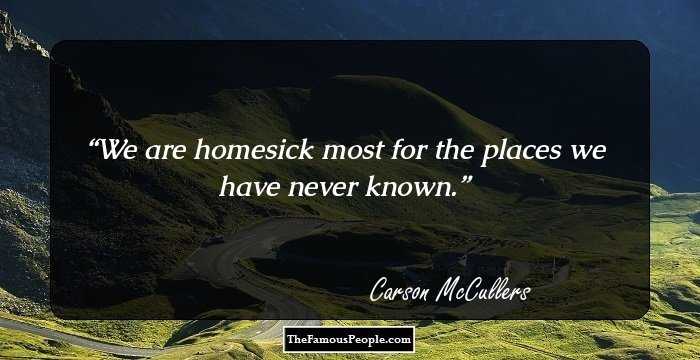 Quotes: Never
Major Works
Her debut novel, ‘The Heart is a Lonely Hunter’ based on the story of a deaf man is considered a literary sensation. It was one of her works in which she represented the voice of the rejected, forgotten and oppressed. The novel was ranked among the list of the 100 best English language novels of the 20th century.
Awards & Achievements
Her play ‘The Member of the Wedding’ won the 1950 New York Drama Critics Circle Award for best American play of the season. It also won the Donaldson Award fro best play, and best first play by an author. 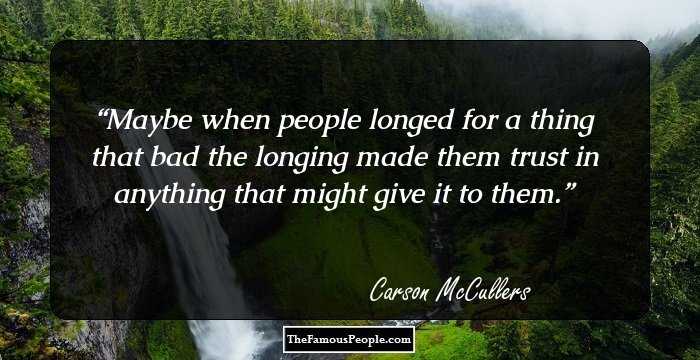 Personal Life & Legacy
She married an aspiring writer Reeves McCullers in 1937. The couple separated in 1940 and divorced in 1941. Carson and Reeves remarried in 1945.
She once attempted suicide when she was depressed. Some years later her husband convinced her to attempt suicide with him. But she fled while Reeves committed suicide.
She suffered from health problems throughout her life. She was partially paralyzed by the age of 31. She died of a brain hemorrhage in 1967.
Recommended Lists:
Writers #537
You May Like

Quotes By Carson McCullers | Quote Of The Day | Top 100 Quotes

See the events in life of Carson McCullers in Chronological Order