Candace Cameron Bure is an American actress best known for her role as ‘DJ Tanner’ in the sitcom ‘Full House.’ A multi-talented personality, Candace has taken up various roles within the entertainment industry; she is known as an actor, producer, author, and talk show panelist. Candace was exposed to performing arts early in her life as her elder brother Kirk Cameron was already an established actor. Following in the footsteps of her brother, Candace joined the entertainment industry. During her early days in the industry, she appeared in a number of television commercials and played guest roles. She got her big breakthrough in 1987 when she was cast to play a role in the sitcom ‘Full House.’ Her performance as ‘DJ Tanner’ earned her rave reviews and popularity. She then went on to land a role in the film ‘Punchline.’ She then played the lead role of ‘Summer Van Horne’ in the TV series ‘Make It or Break It.’ In 2014, Candace appeared as a contestant in the reality show ‘Dancing with the Stars,’ where she finished third. From 2016 to 2020, Candace Cameron reprised her role as ‘D.J. Tanner’ in the spin-off series ‘Fuller House.’ She also directed three episodes of the series. 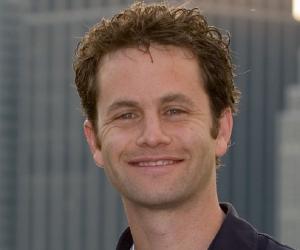 Candace Cameron Bure was born Candace Helaine Cameron on April 6, 1976, in Panorama City, Los Angeles, California, USA, to Robert and Barbara Cameron. While her father worked as a gym instructor, her mother was employed as a talent manager. Her elder brother Kirk Cameron is also an actor.

With her brother already in the field of entertainment, it was only natural for Candace to follow suit. At the age of five, she started her journey as an actress. She went on to appear in a number of television commercials.

Early on in her career, Candace Cameron Bure made several guest appearances in television series, such as ‘St. Elsewhere,’ ‘Growing Pains,’ and ‘Who's the Boss?’ She also starred in the sitcom ‘Punky Brewster’ and teen comedy film ‘Some Kind of Wonderful.’

In 1987, she landed the role of ‘Donna Jo "DJ" Tanner,’ the oldest daughter, in the coming-of-age ABC sitcom ‘Full House.’ The series was a major hit and lasted eight seasons that housed 192 episodes. Candace remained a member of the ensemble cast during its run from 1987 to 1995.

During her ‘Full House’ years, Candace also featured in a number of made-for-TV movies, such as ‘No One Would Tell,’ ‘She Cried No,’ ‘NightScream,’ and ‘Camp Cucamonga.’ Meanwhile, she also appeared in the movie ‘Punchline.’

In 1990, she hosted the ‘Nickelodeon Kids' Choice Awards’ with Dave Coulier and David Faustino. She was offered the hosting job yet again in 1994, thus becoming the first person to host the awards twice or more.

Following the end of the ABC sitcom ‘Full House,’ Candace guest-starred in television series like ‘Cybill’ and ‘Boy Meets World.’ In 1996, she married Russian hockey player Valeri Bure and by 2002, she was blessed with three children. After the birth of her children, she took a break from television and film to devote her time to her family.

In the early-2000s, she made several appearances. She was one of the interviewees on ‘I Love 80s’ and ‘I Love the 80s Strikes Back.’ She also co-hosted ‘50 Cutest Child Stars: All Grown Up’ on E! Network.

Following a couple of guest roles in television series, such as ‘That’s So Raven’ and ‘The Wager,’ she starred in the television film ‘Moonlight and Mistletoe’ for the Hallmark Channel in 2008. A year later, she returned to mainstream acting with the television series ‘Make It or Break It.’ The series ran until 2012.

In 2014, she took part in the celebrity dance reality show ‘Dancing with the Stars’ with choreographer Mark Dallas. Her dancing skills were lauded in the show where she finished second runner up behind Amy Purdy and Meryl Davis.

In 2015, she announced that she would reprise her role as ‘Donna Jo "DJ" Tanner’ in Netflix’s spin-off of the television series ‘Full House.’ Titled ‘Fuller House,’ the show became a major hit and was picked up for a second season. In addition to appearing in the spin-off, she also co-hosted season 19 and 20 of the show ‘The View.’

Apart from working as an actor, Bure is an author as well. She has written four books: the 2011 ‘New York Times’ bestseller ‘Reshaping It All: Motivation for Physical and Spiritual Fitness,’ the 2014 ‘Balancing It All: My Story of Juggling Priorities and Purpose,’ the 2015 ‘Dancing Through Life: Steps of Courage and Conviction,’ and the 2018 book ‘Kind is the New Classy: The Power of Living Graciously.’

The magnum opus of Candace Cameron Bure’s career came in 1987 when she landed an important role as ‘Donna Jo "DJ" Tanner’ in the coming-of-age ABC sitcom ‘Full House.’ She was lauded for her portrayal of the character. The series became a huge hit. In its eight years of run, it became one of the most successful series of all time, airing 192 episodes. Such was the reception of the series that a spin-off was released in 2016 under the title ‘Fuller House.’ Candace reprised her role as ‘DJ Tanner’ in the spin-off series.

Over the years, Candace Cameron Bure has received several nominations under various categories for her excellent portrayal of ‘DJ Tanner.’ She received the ‘Kids' Choice Award’ in 1994 for ‘Favorite Television Actress’ for her performance in ‘Full House.’

In 2016, she won the ‘Teen Choice Award’ for ‘Choice TV Actress Comedy’ for ‘Fuller House.’ The following year, she won the same award under the same category for the same series.

Candace Cameron Bure met Russian NHL hockey player Valeri Bure at a charity hockey game. She was introduced to him by her ‘Full House’ co-star Dave Coulier. The two started dating and walked down the aisle on June 22, 1996. The couple has been blessed with three children, daughter Natasha in 1998, and sons Lev in 2000 and Maksim in 2002.

Their daughter Natasha Bure caught the attention of many when she participated in season 11 of ‘The Voice’ as part of Team Adam Levine. She was eliminated in the ‘Battle Round’ on October 10, 2016.

During her 20s, Candace suffered from an eating disorder called bulimia nervosa.