Advanced Search
Caitlin Carmichael is an American actor who is best known for her roles in films, such as ‘Backlight’ and ‘Lizzie.’ She was born and raised in Georgia and started acting and dancing at a very early age. She embarked on an acting career at the age of 4, with a small role in the series ‘In the Motherhood.’ In 2010, she made her film debut with the film ‘Backlight.’ She was 6 years old then. Soon, she embarked on a film and TV career that spanned many years. She has made key appearances in a number of films and TV series such as ‘iCarly,’ ‘Shake It Up,’ ‘Hot in Cleveland,’ and ‘Law & Order: LA.’ She also earned critical acclaim for many of her roles. In 2011, she was nominated for a ‘Young Artist Award’ for her short film ‘The Mis-Informant.’ Her performance in the miniseries ‘Bag of Bones’ earned her the ‘Best Performance Award’ at the 33rd ‘Young Artist Awards.’ American People
Georgia Actresses
Cancer Actresses
American Actresses
Child And Teen Actresses
Early Life
Caitlin Carmichael was born on July 2, 2004, in Tifton, Georgia, to Tom and Catherine Carmichael. Soon, her parents moved to California. With time, her interest in the world of show business blossomed.
She always showed an interest in performing arts, such as dancing and acting. Her mother got her enrolled in dance classes at the age of 3. She learned gymnastics, too.
Owing to her blossoming acting career, she was mostly homeschooled. Her mother started taking her to various auditions when Caitlin turned 4 years old.
Continue Reading Below
Career
Caitlin faced the camera for the first time in 2008, in a small but significant appearance in a single episode of the series ‘In the Motherhood.’ She appeared as ‘Sasha’ in the episode titled ‘Just Shoot Me, Cupid!’
Following her acting debut, she did a one-episode role in the series ‘Mystery ER.’ The same year, she appeared in a small role in the series ‘Criminal Minds.’ In 2010, she appeared in the series ‘10 Things I Hate About You,’ where she played the role of a young ‘Bianca Stratford.’
By 2010, she was busy auditioning for film roles. Soon, she made her film debut with a role in ‘Backlight,’ where she played the role of ‘Jamie.’ ‘Backlight’ was a low-key film and did not gain any momentum either critically or commercially.
In 2011, she appeared in the comedy–drama film ‘Conception,’ where she played the role of ‘Lucy.’ The film received mixed reviews from critics and was a box-office failure. Despite the failure of the film, Caitlin earned repute as a talented child actor, which reflected in the fact that she appeared in about a dozen TV roles the same year.
In 2011, Caitlin appeared in a number of popular series, such as ‘iCarly,’ ‘Hot in Cleveland,’ ‘Shake It Up,’ ‘True Blood,’ ‘Dexter,’ and ‘Bag of Bones.’ Some of those series were critically acclaimed, and she ended up getting nominated for a few awards for her performances.
The same year, she played the lead role in a short film named ‘The Mis-Informant.’ Her performance earned her a ‘Young Artist Award’ nomination. She won the ‘Best Performance Award’ for her role in the series ‘Bag of Bones.’
In 2012, she appeared in three films: ‘Forgetting the Girl,’ ‘Lizzie,’ and a short film titled ‘Lany’s Morning.’ The same year, she appeared in series such as ‘Daybreak’ and ‘Retired at 35.’ She also played key roles in the TV films ‘The Dog Who Saved the Holidays’ and ‘Bad Girls.’
The same year, she voiced the character named ‘Alma’ in the series ‘Doc McStuffins.’ She continues to play the voice role to date.
In 2013, she appeared as ‘Amanda’ in the horror film ‘The Wicked.’ The film received overwhelmingly bad reviews from critics but earned a decent profit at the box office. The same year, she played small roles in series such as ‘Vegas’ and ‘Criminal Minds.’
Continue Reading Below
The same year, she bagged a big opportunity when she was chosen to play a leading role in the series ‘Chosen.’ She played ‘Ellie Mitchell’ in the action thriller. It received remarkable reviews. Caitlin continued to portray her role for two years and gained international fame.
However, with the lack of meaty film roles, she turned toward doing more short films, which gave her ample opportunities to showcase her real skills. She played key roles in short films such as ‘Bedbug,’ ‘Unmatched,’ and ‘Sweetheart.’
In 2014, she became part of two huge films: ‘300: Rise of an Empire’ and ‘Teacher of the Year.’ In the former film, she played the younger version of the main character, ‘Artemisia.’ In the latter, she portrayed ‘Sierra Carter.’
In 2015, Caitlin starred in a leading role in the family drama ‘An American Girl: Grace Stirs up Success.’ The movie featured her as ‘Maddy,’ the leading character’s best friend and an art lover. The film was mainly released in the direct-to-video format, but a number of theaters across the US played the film. The same year, she also appeared in the film ‘Wiener Dog Internationals’ and the short film ‘Monsters.’
She played the supporting role of ‘Sam’ in the film ‘Martyrs.’ The horror film was released at the ‘Cannes Film Festival,’ which was a rarity. Despite being featured in one of the most prestigious film festivals in the world, the film received abysmal reviews from both critics and audiences.
In 2016, she appeared in the film ‘The Dandy Warhols: Catcher in the Rye,’ which was a very unique take on the critically acclaimed cult classic novel ‘The Catcher in the Rye.’ The same year, she was also seen playing supporting roles in films such as ‘Po,’ ‘The Night Visitor 2: Heather’s Story,’ and ‘A Mermaid’s Tale.’
In 2017, she played one of the key roles in the film ‘Wheelman,’ which featured her as ‘Katie.’ The film was released on ‘Netflix’ and earned encouraging reviews.
She was recently seen in series such as ‘Z Nation,’ ‘The Loud House,’ ‘Chicken Girls,’ and ‘Young Sheldon.’
Personal Life
Caitlin Carmichael has been an avid dancer since her childhood years. She is professionally trained in dance forms such as ballet, tap, and hip-hop. She is also a trained gymnast.
She is often involved in charitable deeds. She also feeds the homeless at the ‘Beverly Hills Presbyterian Church’ in Los Angeles.

See the events in life of Caitlin Carmichael in Chronological Order 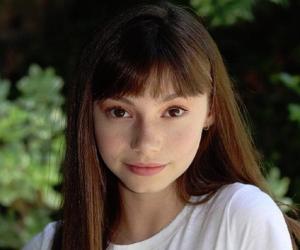