Buck Barrow was an American criminal, known as one of the members of the infamous ‘Barrow Gang.’ Born and raised in Texas, he was not interested in going to school and permanently dropped out of school before he was 10 years old. Upon attaining adulthood, he moved to Dallas and became a member of the West Dallas criminal underbelly. Buck was imprisoned in 1929, after being captured for a burglary he had committed in Denton, Texas. Buck escaped from prison and went back home. However, on being advised by his wife and family to complete his prison sentence, he did so. Upon his release in 1933, he joined hands with his younger brother, Clyde, and conducted several armed robberies. In April and June 1933, Buck, along with his crime partners, indulged in two separate shootings, killing three policemen. In July 1933, Buck and his gang members were wounded in a shootout. On July 29, 1933, Buck died from gunshot wounds at the ‘King’s Daughters Hospital’ in Iowa. His gravestone read: “Gone But Not Forgotten.” 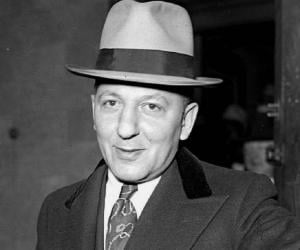 Louis Buchalter
Gangsters #100
Criminals #505
DID WE MISS SOMEONE?
CLICK HERE AND TELL US
WE'LL MAKE SURE
THEY'RE HERE A.S.A.P
Quick Facts

American Celebrities
Male Criminals
Pisces Criminals
American Gangsters
American Criminals
Early Life & Childhood
Buck Barrow was born Marvin Ivan Barrow, on March 14, 1903, in Jones Prairie, Marion County, Texas, to Henry and Cumie Barrow. He was the third child of his lower middle-class parents.
He earned the nickname “Buck” when he was a child. It is believed that one of his aunts had seen him running around like a horse and had thus named him “Buck.” Uninterested in the aspect of receiving an education, Buck intended to not study further and dropped out of school permanently around the age of 9. He liked fishing and hunting more than studying.
The Barrow family lived and raised cattle on a farm. Most of the children from the family left the farm when they became adults. They moved to better places in search of job opportunities. Buck also made a move to Dallas around the time he became an adult.
He did many odd jobs in the new city and worked under his older brother, who had his car-repairing business. However, the money earned was not enough. Buck had bigger aims as far as his future was concerned. Soon after joining his brother’s business, Buck began getting involved in petty criminal activities.
Continue Reading Below
You May Like

The Hottest Male Celebrities With The Best Abs
The Crime Life
Soon, Buck’s remaining family also moved to Texas. Buck was then doing everything he could to make money fast. He invested in cockfights and dogfights. He got married twice within a few years, and he also got divorced twice rather quickly. He had three children from his marriages.
By the time he turned 23, Buck had begun stealing automobiles from all over Texas. He also involved his younger brother, Clyde, in his activities. Both the brothers were arrested for the first time in 1926, along with a truck full of stolen turkeys that they had intended to sell during Christmas. Buck took the blame on himself and was imprisoned for a week for the crime.
After being released from prison, Buck maintained his criminal ways but remained low-key, away from the law’s eyes. In 1929, he fell in love with Blanche Caldwell. They started dating soon after.
While performing a burglary in November 1929, Buck was shot during a shootout with the lawmen in Denton, Texas. He was captured on the spot. He was tried and sentenced to 4 years in prison. He was supposed to serve his time at the ‘Texas State Prison System.’ He was kept at the ‘Ferguson Prison Farm,’ from where he escaped in March 1930.
He planned the escape so confidently that he could move out of the prison, steal the car of one of the guards, and ride straight to his parents’ house in West Dallas to meet Blanche. Buck and Blanche escaped together to Oklahoma and got married there in July 1931.
However, Blanche did not like her husband’s criminal ways and neither did his parents. They all convinced Buck to move back to prison to complete his sentence. Buck did as advised and was taken to the ‘Huntsville Penitentiary’ to resume his sentence. While in prison, he continued to write letters to his family and Blanche.
He was released abruptly in March 1933, as the new governor of Texas came up with a few new rules. In order to get rid of the crowds in prisons, the governor decided to let the prisoners who had served at least half their sentences go. Buck’s mother and wife also attempted to lobby for Buck, and this pushed the authorities to let him go.
After being released, Buck did not stop his criminal ways and immediately joined hands with Clyde, Bonnie, and WD Jones and moved to Missouri. Blanche also accompanied him, and they came to be known as the ‘Barrow Gang.’
The Barrow Gang
‘The Barrow Gang,’ led by Buck and Clyde Barrow, wreaked havoc in Missouri and nearby places. The gang participated in many armed robberies in the following weeks. During this time, they were also noticed by the media. Soon, their antics were published all over.
Continue Reading Below
However, the gang could not survive for long. They got themselves stuck in many shootouts within a few months. In April 1933, Buck, Clyde, and WD were involved in a shootout with two lawmen, Wes Harryman and Harry McGinnis. The shootout took place in Joplin, Missouri, and both the officers were killed on the spot.
This was followed by several more attacks on the gang. In June 1933, the gang faced another shootout at Alma, Arkansas, with City Marshal Henry D Humphrey. Henry was also shot dead on the spot.
The Final Days
After facing repeated attacks from law officers, the ‘Barrow Gang’ put a brake on their criminal activities. However, that did not stop the law from pursuing them. One such shootout took place in July 1933, in Platte City, Missouri. This time, Buck Barrow received a bullet to his head.
The gunshot wound caused a lot of blood loss. Blanche also got shot during the shootout, but they managed to escape. Despite a deep wound to his brain, Buck was fully conscious and ate and drank like a healthy man.
After 5 days of this incident, another shootout took place, this time near Iowa. Buck was hit in his back. All the remaining members of the gang managed to escape, while Buck and Blanche were arrested.
Blanche was blinded in one eye as a consequence of the shooting. She was subsequently tried in Missouri and sentenced to 10 years in prison. Buck was taken care of by doctors at the ‘King’s Daughters Hospital’ in Iowa. After suffering for a few more days, Buck died on July 29, 1933.
Legacy
When the news about Buck Barrow’s serious condition became public, the sheriff of Dallas County, RD Schmid, notified Buck’s parents and helped them visit Buck in Iowa. They were with Buck during his final few hours.
The family refused to bury Buck, as they felt Clyde may follow his elder brother and die any day. Clyde came to know about this and suggested that the grave should read: “Gone But Not Forgotten.”
Clyde died in a shootout in May 1934. Both the brothers were buried in the same grave at the ‘Western Heights Cemetery’ in Dallas, Texas.
You May Like

See the events in life of Buck Barrow in Chronological Order