Britanny Murphy was a well-known American actress and singer known for her roles in movies, such as ‘Freeway’ and ‘Bongwater.’ Born in Atlanta, Georgia, she moved to Los Angeles with her family at a young age, in order to pursue a career in acting. Her first important role was in the romantic comedy film ‘Clueless’ which not only was a critical and commercial success but developed a cult following as well. She proceeded to play important roles in movies, such as ‘The Prophecy II’, ‘Girl Interrupted’, ‘Riding in Cars with Boys’ and ‘8 Mile’. Also known for her works on TV, she played a supporting role in the American sitcom ‘Drexell’s Class’. Later she also voiced several characters in the popular award winning animated sitcom ‘King of the Hill’. She had a bright future ahead but she unfortunately passed away due to pneumonia at the early age of 32. Her widower Simon Monjack died due to the same illness three months later. The last film in her career was the psychological horror film ‘Something Wicked’, where she played one of the main roles. The film was released in 2014, several years after her death. American Celebrities
American Women
Georgia Actresses
Women Singers
Scorpio Singers
Childhood & Early Life
Brittany Murphy was born on November 10, 1977 in Atlanta, Georgia, in the US. Her parents were Sharon Murphy and Angelo Bertolotti. Her mother split up with her father as he was involved in organized crime and was often arrested and imprisoned.
Shortly after the divorce, Murphy and her mother moved to Edison, New Jersey. As a young girl, she developed an interest in acting. Her mother was supportive of her career ambitions and therefore, when she was five, she enrolled Murphy in Verne Fowler's School of Dance and Theater in Colonia, New Jersey.
From around the age of 12, she started appearing in TV commercials. Eventually, she started appearing in minor roles in TV shows such as ‘Murphy Brown’ and ‘Kids Incorporated’. From 1991 to 1992, she played a supporting role in the American sitcom ‘Drexell’s Class’. Meanwhile, she also pursued her education from John Burroughs High School in Burbank, California. 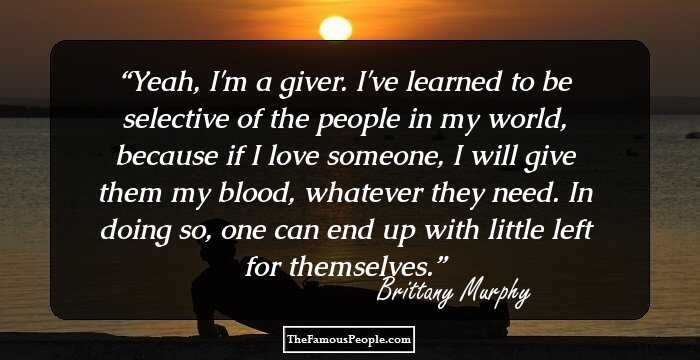 Continue Reading Below
Career
Brittany Murphy’s first important role on the big screen was in the 1995 romantic comedy ‘Clueless’. Directed by Amy Heckerling, the film was based loosely on the novel ‘Emma’ by the renowned author Jane Austen. The film was a commercial success, earning around $57 million on a $12 million budget. It also received positive reviews and eventually achieved a cult status over the years.
After appearing in several films such as ‘Freeway’ (1996), ‘Bongwater’ (1997)’, ‘The Prophecy II’ (1998) and ‘Zack and Reba’ (1998), she played an important role in the 1999 drama film ‘Girl, Interrupted’. The film was directed by James Mangold, and was an average success, commercially and critically. She next appeared in the mystery crime film ‘Trixie’ which was a commercial disaster.
She continued to appear in several films over the years, such as ‘Cherry Falls’ (2000), ‘The Audition’ (2000), ‘Sidewalks of New York’ (2001), ‘Don’t Say A Word’ (2001), and ‘8 Mile’ (2002).
In 2005, she played an important role in the crime anthology film ‘Sin City’. Directed by Frank Miller, it was adapted from his graphic novel of the same name. The film was a huge success commercially, earning nearly three times its budget. It was also praised by the critics.
Other films she appeared in over the years include ‘The Groomsmen’ (2006), ‘The Dead Girl’ (2006), ‘The Ramen Girl’ (2008), and ‘Deadline’ (2009). The movies ‘Abandoned’ and ‘Something Wicked’ were released posthumously after her death in 2010 and 2014 respectively.
She played minor roles in several TV shows throughout her career, some of them being ‘Boy Meets World’, ‘Murder One’ and ‘Pepper Ann’. From 1997 to 2009, she also voiced one of the main characters as well as several other characters in the animated sitcom ‘King of the Hill’. The series was a huge success and earned much acclaim over the years. 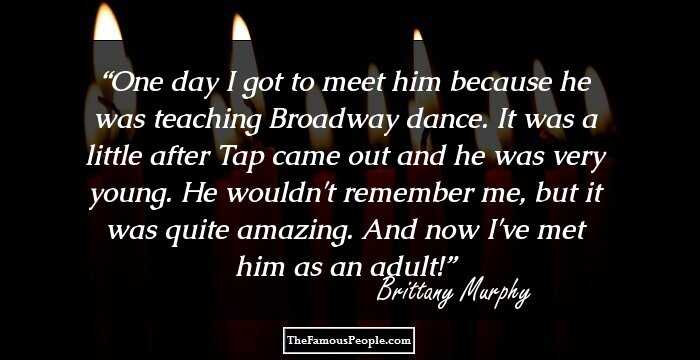 Major Works
Britanny Murphy played one of the main roles in the 2002 hip hop drama film ‘8 Mile’ which was directed by Curtis Hanson. The film was loosely based on Eminem’s actual upbringing. Other actors who appeared in the film include Eminem, Mekhi Phifer, Kim Basinger, Anthony Mackie, and Michael Shannon. The film was a huge success commercially and critically. Eminem also won an Oscr in the ‘Best Original Song’ category for his song ‘Lose Yourself’.
Another one of Murphy’s major works is the anthology crime film ‘Sin City’ where she played an important role. Directed by Frank Miller, it was based on his graphic novel of the same name. The film also starred Jessica Alba, Benicio del Toro, Clive Owen and Mickey Rourke. The film was a huge success, earning nearly four times its budget. It was praised by critics as well and won multiple awards.
She voiced one of the main characters in the animated sitcom ‘King of the Hill’. The series, which aired from 1997 to 2010, was a huge success and earned massive popularity. The story revolved around the Hills, a middle class American family, residing in Arlen, Texas. The show won many awards and nominations, including multiple Emmys.
Personal Life
Brittany Murphy started dating Ashton Kutcher in 2002. However, later they separated and she got engaged to Joe Macaluso in 2005. They broke their engagement the following year. In 2007, she got married to British screenwriter Simon Monjack.
She passed away on 20 December 2009 due to pneumonia. She was 32. She was buried at Forest Lawn Memorial Park in Hollywood Hills, on 24 December.
In January 2010, her mother and her widower established the Brittany Murphy Foundation, a charitable fund for children’s education. It also supports the USO as well as cancer research.
On 23 May 2010, around five months after her death, her husband Simon Monjack was also found dead in the same residence. The cause of his death was later found to be acute pneumonia and severe anemia. 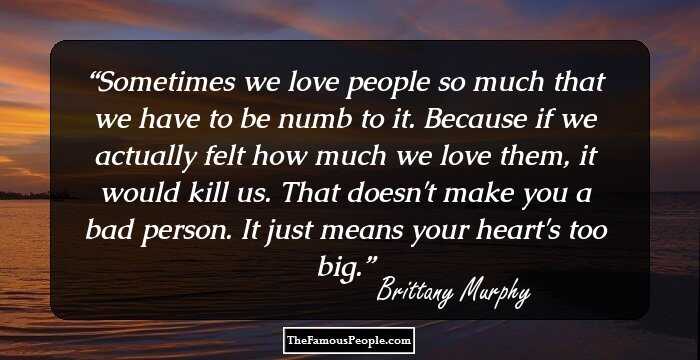 See the events in life of Brittany Murphy in Chronological Order