Bret McKenzie is a comedian, actor, musician and lyricist from New Zealand. He is famous as the one half of the comedy band, ‘Flight of the Conchords,’ alongside Jemaine Clement. Born into an artistic family, McKenzie was naturally drawn to music at an early age. He decided to study drama and film later on and eventually joined ‘The Black Seeds’, a dub band. At the same time, he started collaborating with Jemaine Clement and their comedy band ‘Flight of the Conchords’ was born. They released many albums, including the Grammy-winner, ‘The Distant Future’. Owing to their unique wit, they soon grew popular and were invited to create a radio series for BBC. The series gave them global exposure, and the duo landed an HBO TV series deal. The series, named after their band, ran for two seasons and was critically successful. Apart from comedy, McKenzie has also starred in several films like ‘The Lord of the Rings’ and ‘Austenland’. He has written music for films as well. His most recognized works are his songs for the animation movie, ‘The Muppets’, which bagged him an Oscar for Best Original Song. He is currently writing music for several upcoming films. He has been made an Officer of the New Zealand Order of Merit for his contributions to music and films. New Zealander People
Comedians
New Zealand Men
Tall Celebrities
Tall Male Celebrities
Childhood & Early Life
Bret Peter Tarrant McKenzie was born on June 29, 1976 in Wellington, New Zealand to Peter McKenzie and Deidre Tarrant. He has two brothers: Justin and Jonathan McKenzie. His mother ran a dance school called, Footnote Dance, while his father was a professional lawyer and amateur actor.
As a child, McKenzie was encouraged to pursue artistic hobbies. He learnt to play various instruments, such as the guitar, ukulele and the keyboard. He attended the Clifton Terrace Model School and later graduated from Wellington College.
He decided to study drama and film for his undergraduate studies at Victoria University. It was during this time that he met comedian Jemaine Clement. They grouped together with Taika Waititi and performed as a comedy group called, ‘So You’re A Man.’
McKenzie continued collaborating with Clement, and they formed a band together called, ‘Flight of the Conchords.’ They started writing their own songs and performing across New Zealand and Australia soon after.
Continue Reading Below
You May Like

The Sexiest Men Of 2020, Ranked
Career
Bret McKenzie and Jemaine Clement’s gamble of forming a band paid off in 2001 when they were asked to perform at the Calgary Fringe Festival in Canada. Next year, they performed at the Edinburgh Fringe Festival and even won a Fringe award.
Apart from comedy, McKenzie was active on the music scene and toured the country with the dub band, ‘The Black Seeds’. He was involved in three of their albums: ‘Keep on Pushing’ (2001), ‘On the Sun’ (2004) and ‘Into the Dojo’ (2007).
He released his debut album ‘Prototype’ as a solo artist in April 2004. Aside from this, he also played drums for ‘The Dub Foundation’ and was a founding member of Wellington International Ukulele Orchestra. He continues to remain the ambassador for the NZ Ukulele Trust.
The next show of the Conchords was titled, ‘High on Folk’, which was a hit and was nominated for the Perrier Award in England. They also created a series for BBC Radio titled, ‘Flight of the Conchords,’ based on their experiences of trying to establish a comedy/music scene in London.
‘Flight of the Conchords’ was released on BBC Radio 4 in 2004, with Rob Brydon as its narrator. The series included the likes of Jimmy Carr and Rhys Darby as well. McKenzie and his partner went on to win the Bronze Sony Radio Academy Award for Comedy for the series.
McKenzie also busied himself with other work, including minor appearances in hit films. He was seen as Lindir in ‘The Lord of the Rings: The Fellowship of the Ring’ (2001) and ‘The Lord of the Rings: The Return of the King’ (2003).
In 2005, the duo started growing popular in the USA and was invited by HBO to perform in Los Angeles. McKenzie and Clement presented their comedy piece, ‘One Night Stand’, which became a huge success.
In 2007, their radio show was adapted into a TV series. Titled ‘Flight of the Conchords’, the series aired from 2007 to 2009 on HBO.
The TV series ran only for two seasons and generously borrowed material from their original radio series, including songs and anecdotes. Despite a short run, it gathered a cult following across the world and was considered a hit.
Continue Reading Below
Later in 2007, the Conchords released their second album titled, ‘The Distant Future’. It went on to win the Grammy for the Best Comedy Album, and spread the band’s fame across the globe.
McKenzie started making more appearances on TV. He was seen as Rob, the Alien in ‘The Drinky Crow Show’ (2008) in two episodes. In the sketch comedy series, ‘Tim and Eric Awesome Show, Great Job!’, he appeared in the ‘Tennis’ episode in 2009.
In 2009, he appeared in the Jason Stutter directed horror movie ‘Diagnosis: Death’ as Dr. Cruise. Later, he teamed up with Clement for an episode of ‘The Simpsons’ titled, ‘Elementary School Musical,’ in 2010.
McKenzie received another breakthrough in 2011 when he joined the film ‘The Muppets’ as a songwriter and music supervisor. His songs, ‘Life’s a Happy Song’ and ‘Man or Muppet,’ became huge hits and won him the Academy Award for Best Original Song.
In 2012, he was seen in the films, ‘Austenland’ and ‘Two Little Boys’. While ‘Austenland’ was a romantic comedy that became a commercial success, ‘Two Little Boys’ won the hearts of the critics with its unique storyline and direction. McKenzie also made a guest appearance in ‘The Hobbit: An Unexpected Journey’ in the same year.
His contributions to music and entertainment was recognized by his country in 2012, and he was made an Officer of the New Zealand Order of Merit, a coveted award.
The Conchords have appeared in many TV series together and were recently seen on ‘Late Night with Conan O’Brien’, ‘The Late Show with David Letterman’, and ‘The Late Late Show with Craig Ferguson’.
In 2014, McKenzie worked as the music supervisor for the sequel, ‘Muppets Most Wanted’. Later In 2016, he wrote the lyrics for the Sainsburys Christmas advertisement. The jingle featured James Corden’s voice and was received positively.
McKenzie has been signed as a songwriter for various upcoming movies, including ‘Fortunately, the Milk’, ‘Bob the Musical’ and ‘Moonland’.
Major Works
Bret McKenzie is most popular for his collaborative comedy band with Jemaine Clement, ‘Flight of the Conchords’. They have been on several tours and released many albums. Their second album ‘The Distant Future’ won the Grammy Award for Best Comedy Album.
McKenzie’s most famous TV project is the HBO series, ‘Flight of the Conchords’, which ran from 2007 to 2009. Based on the radio show of the same name, the series chronicled the life of the duo trying to make a living in London as musicians. Despite a short run, the show was a cult favorite.
McKenzie’s is an accomplished musician who is known for writing the songs for the movie, ‘The Muppets’. His original song ‘Man or Muppet’ became a worldwide hit and won the Academy Award for Best Original Song in 2012.
Family & Personal Life
Bret McKenzie has been married to his childhood sweetheart Hannah Clarke since 2009. The couple decided to tie the knot in a small ceremony attended only by family and close friends. They have two children. Their daughter Vita was born in 2009, while their son Leo was born in 2011. Hannah works as a publicist.
McKenzie is very close to his family; and his wife and children always travel with him when goes abroad. Currently, the family maintains residences in Los Angeles, Wellington and New York City in order to keep up with McKenzie’s work commitments.

See the events in life of Bret McKenzie in Chronological Order 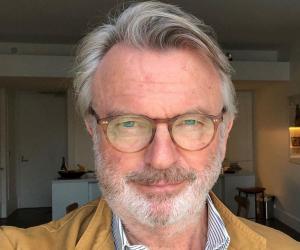