(Mexican Actress Best Known for Her Role in One of the Most Successful Telenovelas of All-Time, 'Rubí')

Barbara Mori is a very famous name in Mexican entertainment widely known for her role in the hit television series ‘Miranda de Mujer.’ Born in to a family of Uruguayan-Mexican heritage, she spent most of her childhood shuffling between her divorced parents. The separation of her parents had a profound impact on the young girl and she learnt to be independent since an early age. It was during one such occasion while she was working an odd job that she was spotted by a fashion designer; thus kick-started her modelling career. She eventually realized her passion for acting and enrolled at a premier acting school to hone her skills. Since her debut in the telenovela ‘Al Norte del Corazón’, this talented actress has charmed television viewers worldwide with her stellar performances. Apart from sticking to Mexican projects, Mori moved out of her comfort zone and ventured into the Indian film industry later. The actress proved that language is no barrier to cinema by essaying an important role in the movie 'Kites' which consisted of dialogues in Hindi, a language she didn't understand. At a later stage of her life, Barbara grabbed the limelight for her alleged relationship with Indian actor Hrithik Roshan. With her endearing qualities, Barbara Mori is definitely an actress to remember and exemplify Angelique Boyer
DID WE MISS SOMEONE?
CLICK HERE AND TELL US
WE'LL MAKE SURE
THEY'RE HERE A.S.A.P
Quick Facts

Mexican People
Mexican Women
Female Models
Aquarius Models
Mexican Models
Childhood & Early Life
She was born on February 2, 1978 to father Japanese-Uruguayan Yuyi Mori and mother Mexican Rosario Ochoa. She has two siblings, actress Kenya Mori and Kintaró Mori.
Her parents separated when she was three and her childhood was spent between Mexico and Uruguay. She finally settled in Mexico City when she turned 12.
Continue Reading Below
Career
Barbara Mori was given a break at the age of 14 while she was working as a waitress in a local restaurant. She was discovered by fashion designer Marcos Toledo who offered her a modelling job.
She later studied acting in ‘El Centro de Estudios de Formación Actoral’ and began her acting career.
She made her acting debut in the Mexican telenovela ‘Al Norte del Corazón’ in 1996. The following year she participated in the comedy series ‘Tic Tac’ and played a role in the smash TV-hit ‘Mirada de Mujer’.
In 1998, she played the lead role Azul in the series ‘Azul Tequila,’ opposite Mauricio Ochmann.
She filmed the series ‘Me Muero Por Tí’ in Miami, with Peruvian actor Christian Meier in 1999. In the same year she also acted in the ‘Telemundo’ telenovela ‘Amor Descarado.’
Her first movie role was shot in 2000, when she was cast opposite Arath De La Torree in the Mexican romantic comedy ‘Inspiración.’ It was a box-office success in the cinemas.
In 2002, she portrayed a negative role of a seductive college student in the telenovela ‘Subete A Mi Moto’ together with Vanessa Acosta.
She signed with ‘Televisa’ in 2004 and played the starring role of ‘Rubí,’ a popular TV-show and high–rating Mexican soap opera, with the same title.
In 2005 she obtained the starring role in the blockbuster film ‘La Mujer de mi Hermano’ as Zoe. Playing the role of her husband was Christian Meier, who was her co-star in ‘Me Muero Por Tí.’
Continue Reading Below
She also won the leading role in ‘Pretendiendo’, a Chilean/Mexican-backed movie which was critically panned.
Indian film producer Rakesh Roshan got her services as the leading lady for his movie ‘Kites.’ She co-starred with Roshan’s son, Bollywood star Hrithik Roshan. Production started at the end of July 2008, and the movie was released on May 21, 2010.
She earned further international fame through her movie ‘Violanchelo.’
In 2009, she appeared in her self-produced psychological crime thriller ‘Amor, Dolor y Viceversa’ opposite Leonardo Sbaraglia.
In 2011, she got the main role in the action-drama ‘Viento En Contra’, and showed her acting ability together with actors Héctor Arredondo and Fernando Luján. The movie was produced by Mori and distributed by ‘Warner Bros.’
Major Works
Barbara Mori was diagnosed with early stage cancer and luckily was able to survive. She shared her ordeal with the audiences in ‘docu-drama titled ‘1 a Minute,’ produced by UniGlobe Entertainment', released in 2010, in the USA and in India.
The documentary was made by actress Namrata Singh Gujral and also featured other cancer survivors like Diahann Carroll and Jaclyn Smith as well as Daniel Baldwin, William Baldwin and Priya Dutt, whose lives have been touched by cancer. It also featured Kelly McGillis as the narrator and also starred Morgan Brittany, Deepak Chopra and Lisa Ray.
Awards & Achievements
She won ‘TVyNovelas Best Female Revelation’ award for the telenovela ‘Mirada de Mujer’ in 1998.In 2005 she won the ‘TVyNovelas’ award in the ‘Best Lead Actress’ category for the telenovela ‘Rubí’.
Personal Life & Legacy
At nineteen she met actor Sergio Mayer, who fathered her son Sergio, who was born in 1998; but the two never married.
The actress has her own lingerie line, and uses her image to support charitable causes such as the fight against breast cancer in Mexico.
Apart from her income from show business, she has also dabbled in stock investments and property holdings. She owns the ‘Fat Mori Burger’ chain of restaurants in Mexico City, and has her own brand of Vodka Pure ‘Wondermori’ in Mexico, and a fashion line called ‘Bárbara Mori Seduction’.
Recommended Lists:
Fashion #644

See the events in life of Barbara Mori in Chronological Order 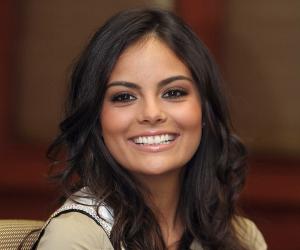