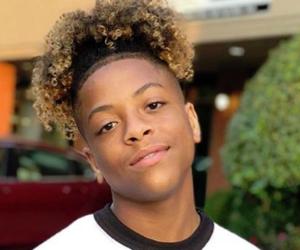 Leyoncebaby
Brace Face Laii is an Instagram star, best known for her videos on the popular video and photo sharing website. Her account has more than 647,000 followers. She also has a second Instagram account, in which she primarily shows off her cool dance moves. Brace Face Laii is also known for her relationship with fellow Instagram star Anayah Rice. Anayah appears frequently on Laii’s Instagram videos. She also has her own Instagram page, which has more than 527,000 followers. Laii and Anayah are famously known on the internet as ‘Mrs. and Mr. Crunchy.’ American Women
Female Instagram Dancers
Female Instagram Stars
American Instagram Stars
Early Life & Career
Brace Face Laii was born on May 29, 2004, in the United States of America. She was introduced to social media very early in her life, which encouraged her to experiment with various platforms, including Instagram. Thanks to her passion for hip hop music and dance, Laii started posting dance video clips on her Instagram page, which started attracting followers. Her popularity gradually increased leading to thousands of followers on her account. By December 2017, her page had accumulated 438,000 followers. Unfortunately, her account was hacked in December 2017 and all the content that she had posted was erased. Despite suffering a setback, Laii continued posting her videos with utmost passion. She currently has more than 647,000 followers and is very popular among fellow social media stars as well.
Recommended Lists:

American Instagram Dancers
American Female Instagram Stars
American Female Instagram Dancers
Gemini Women
She has collaborated with other famous Instagrammers, such as Saucyrell and Esssenccee. Some of her collaborative dance videos with Saucyrell have gone viral on the internet. She also has a secondary Instagram page, which, too, is packed with her dance videos. Interestingly, Brace Face Laii is not active on other social media platforms. However, one can find Laii’s YouTube videos on channels owned by her fans and followers.
You May Like

Celebrities Who Look Beautiful Even Without Makeup
Continue Reading Below
Personal Life & Family
Brace Face Laii is a self-proclaimed lesbian. She is in relationship with fellow Instagram star Anayah Rice, who has over 527,000 Instagram followers. Anayah can often be seen appearing in the videos posted by Laii. Like her girlfriend, she too, likes hip hop and dance. In many of their videos, Laii and Anayah have displayed their affection publicly.
Laii is a close friend of Esssenccee, another Instagram personality. Apart from appearing in videos posted by Esssenccee, Laii also supports Esssenccee’s merchandise store. The store, which is co-owned by Esssenccee, sells unisex T-shirts, unisex hoodies, leggings, hats, beanies, backpacks, lingerie, dance shorts, mobile phone cases, and much more. Interestingly, both Brace Face Laii and Esssenccee are being managed by Ashlee Gina, who works for ‘Shattered Ceilings Entertainment.’
Brace Face Laii is close to her family members. She has often featured her niece and nephew on her Instagram page. She has also featured her mother and her stepfather in some of her videos. In one such video, Laii’s mother and stepfather are seen trying out a dance move along with Laii. She is also close to famous Instagram twins, Yoni and Solai, popularly known as ‘The Wicker Twins.’ Laii manages their Instagram page and even calls them her daughters.