Boris Franz Becker is one of the most successful tennis players. At the age of 17, he was the youngest player to have won the Wimbledon men’s singles championship. He was also the first unranked player and the only German ever to have won this title. Becker also won five Grand Slam championships, 13 Masters Series titles, three Open era finals (ATP Tour Finals, WCT Finals, Grand Slam Cup) and the Olympic gold medal in doubles. Becker played his best on fast surfaces, mainly grass courts and indoor carpet. He was ranked the 11th best male player during 1965 to 2005 by the ‘Tennis’ magazine. Since his retirement, Becker has been engaged in expanding his chain of business, the Boris Becker Sports that sells tennis equipment and apparel. His personal life has been full of controversies. He was charged with tax evasion. He escaped imprisonment but could not evade a criminal record. He touched upon his marriage and divorce from model Barbara Feltus and his substance abuse in his autobiography, ‘Boris Becker: The Player’.
Continue Reading Below 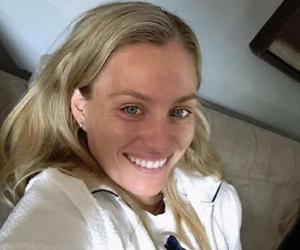 German People
Tall Celebrities
Tall Male Celebrities
Male Sportspersons
Male Tennis Players
Childhood & Early Life
Boris Becker was born on 22 November 1967 in Leimen, Germany to Karl-Heinz Becker, an architect and Elvira Becker.
Becker’s father built a tennis club (Blau-Weiss Tennisklub) in their town where Becker learned to play as a child.
Young Boris started playing competitively at the age of eight and at 11 he was playing in the adult divisions. He trained under Gunther Bosch.
In 1984, he got a manager, Ion Tiriac, who was also a famous coach. The same year he won his first doubles title in Munich.
Continue Reading Below
You May Like

Who Is The Most Popular BTS Member?
Career
In 1985, Boris Becker won the Tennis World Young Masters at the NEC in Birmingham and first top-level singles title in June at Queen’s Club.
On 7 July 1985, his first breakthrough happened when he became the first unseeded German player to win the Wimbledon singles title by defeating Kevin Curren.
In 1986, Becker effectively defended his Wimbledon title by defeating Ivan Lendl in straight sets in the final.
In 1987 he was defeated in the second round of Wimbledon by the world no. 70 player, Peter Doohan.
In the 1987 Davis Cup, Becker and John McEnroe created a record by playing one of the longest matches ever which ended with Becker’s victory.
In 1988, Becker helped West Germany in winning the Davis Cup again along with the year-end Masters title in New York City and the season ending WCT Finals for the World Championship Tennis tour.
In 1989, he won two Grand Slam singles titles along with the Wimbledon final and the US Open final. The same year, he retained the Davis Cup by defeating Andre Agassi.
The year 1990 was a disappointing one as he lost the Wimbledon final and also failed to defend his US Open title.
In 1991, he won the final of the Australian Open for the first time and claimed the world no. 1 ranking.
Continue Reading Below
In 1992, Becker teamed with Michael Stich to win the men's doubles gold medal at the Olympic Games in Barcelona. He also won 1992 year-end ATP Tour World Championships in Frankfurt.
At the 1995 Wimbledon final, Becker lost to Pete Sampras but fought back in the reckoning by winning the year-end ATP Tour World Championships for the third and last time in Frankfurt.
In 1996, Becker won his sixth and final Grand Slam title by defeating Michael Chang in the final of the Australian Open.
In 1996, he won the Queen's Club Championships for the fourth time but could not play in the Wimbledon final because of a wrist fracture. Later that year, he won the Grand Slam Cup by defeating Goran Ivanisevic in the final.
In 1997, he lost to Pete Sampras in the quarterfinals at Wimbledon.
Boris Becker played Wimbledon the last time in 1999 but lost to Patrick Rafter. He retired on 25 June, 1999.
Post Retirement Activities
Since 2000, Becker has been the owner of the tennis division of Völkl Inc.
Since 2003, he has been a commentator for the BBC at Wimbledon.
He also serves on the advisory board of the German club, Bayern Munich.
Continue Reading Below
Since 2014, he has been working as Novak Djokovic’s coach and has contributed to 5 of his 11 grand slam titles and 10 of his 26 masters 1000 titles.
Major Achievements
He is the youngest Wimbledon champion and the unseeded winner of singles title (1985). He has a record of winning 19 matches against World No.1 Player in the ATP Tour championship (1986–96) and winning 10 matches after trailing 0–2 in sets in the ATP Tour (1987–99).
He has won three professional awards: the ITF World Champion (1989), the ATP Player of the Year (1989) and the ATP Most Improved Player (1985).
In 2003, Becker was inducted into the International Tennis Hall of Fame.
Personal Life & Legacy
On 17 December 1993, Becker married actress and designer Barbara Feltus. The couple had two sons, Noah Gabriel and Elias Balthasar together. The couple divorced each other on 15 January 2001 after Barbara came to know about Becker’s child outside of marriage.
In February 2001, Becker acknowledged paternity of a daughter, Anna, the result of a sexual encounter in 1999 with Russian model Angela Ermakova.
Becker remarried on 12 June 2009 after proposing to Dutch model Sharlely "Lilly" Kerssenberg on a game show. In February 2010 they welcomed a son, Amadeus Benedict Edley Luis Becker.
Trivia
In 2013, he announced plans to form the International Premier Tennis League that will have mixed teams of top players.
He has apartments in Munich, Monaco, and Schwyz, London and Miami.
You May Like

See the events in life of Boris Becker in Chronological Order