Banksy is the pseudonym of an English-based graffiti artist known for his politically themed and often controversial graffiti. He is also a popular political activist and film director who in spite of creating several well-known works of art manages to conceal his true identity. His art has been featured on streets, walls, and bridges of cities throughout the world making him a famous international figure. Known for his cheeky, witty, and sometimes hard-hitting works of social and political commentary, he has revolutionized the world of contemporary art. He is best known for his distinctive stenciling technique and striking images which commonly feature subjects such as rats, apes, policemen, members of the royal family, and children. Banksy started out as a freehand graffiti artist in the 1990s and initially worked as a part of the larger Bristol underground scene with Nick Walker, Inkie and 3D. Eventually he gained fame as an independent artist as his works became more widely noticed. He displays his art on publicly visible surfaces and is well-known for his use of copyrighted material and subversion of classic images. He is also a film director and his first film, ‘Exit Through the Gift Shop’ was nominated for the Academy Award for Best Documentary. British People
Artists & Painters
British Men
British Directors
British Artists & Painters
Early Career
Banksy started out as a freehand graffiti artist in the early 1990s. During his early years he worked as a part of Bristol's DryBreadZ Crew (DBZ), with Kato and Tes, and his art was part of the larger Bristol underground scene. He drew inspiration from some of the local street artists such as Nick Walker, Inkie and 3D.
Initially his work was primarily freehand though he used to stencil on occasion. Over a period of time he began using stencils predominantly as he felt that stenciling gave him more artistic freedom.
Marked by bold images with hard-hitting underlying messages and witty slogans, his art soon gained popularity in the Bristol area and in London. With growing popularity he developed his own signature style that distinguished him from other street artists of the Bristol underground scene.
He painted his first known large wall mural, ‘The Mild Mild West’ to cover advertising of a former solicitors' office on Stokes Croft in Bristol in 1997. The mural shows a teddy bear lobbing a Molotov cocktail at three riot police.
He received much publicity during the 2000s because of the bold nature of his work, characterized by striking images, witty slogans, and underlying social and political commentary. Once considered a vandal for defacing publically visible surfaces on walls, streets, and bridges, he gained new recognition as a popular street artist. 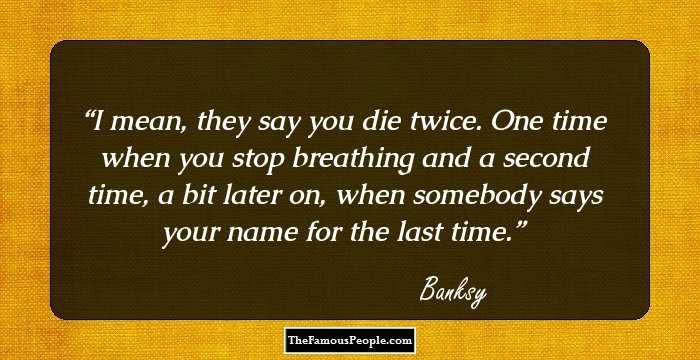 Quotes: You, Time, I
Continue Reading Below
You May Like 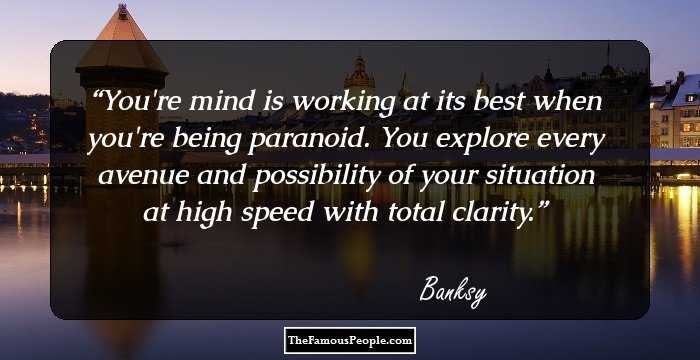 Major Works
He undertook a residency ‘Better Out Than In’ in October 2013 which began as a one-month "show on the streets of New York [City]". Over the duration of one month, he unveiled at least one work of art daily, documenting it on both a dedicated website and an Instagram account. Tourists were able to buy original Banksy art for just $60 each at the show.
Awards & Achievements
His film ‘Exit Through the Gift Shop: A Banksy Film’ won the Toronto Film Critics Association Awards – Best First Feature 2010. The film also received Independent Spirit Award for Best Documentary Feature and Washington D.C. Area Film Critics Association – Best Documentary Film 2010. 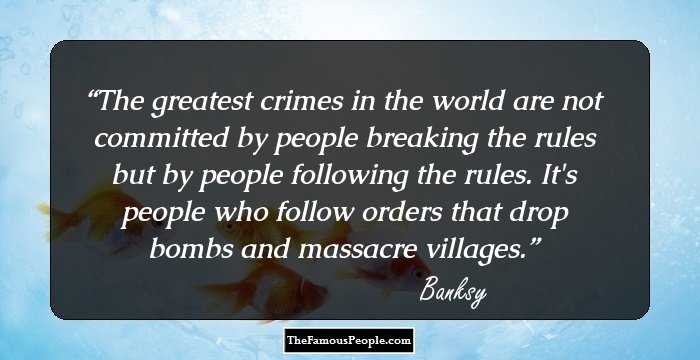 Identity
Banksy's real name and identity remain unknown though it has been speculated that he might be Robin Gunningham, a former pupil at the public Bristol Cathedral School. There are also rumors that Banksy is a woman.
You May Like

See the events in life of Banksy in Chronological Order 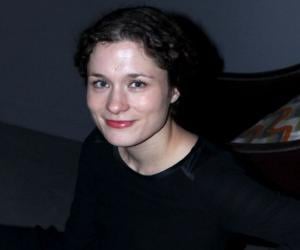