Advanced Search
Bailee Madison is an American actress who is best known for playing the role of the younger sister of Jesse Aarons, May Belle Aarons in ‘Bridge to Terabithia’ in 2007. Besides playing the sister of Jesse Aarons she also played the younger sister of Snow White in an ABC Drama ‘Once Upon A Time’. She was a part of the Hallmark Channel’s hit series, ‘Good Witch’, in which she played the role of Grace Russell. She even starred with Adam Sandler in the film, ‘Just Go with It’ and with Selena Gomez in the Disney channel series ‘Wizards of Waverly Place’ as Maxine Russo. Her career had already begun by the time she was only two weeks old. She first starred in an Office Depot commercial before becoming a part of many national commercials including those for SeaWorld, Disney and Cadillac. She also serves as the spokesperson for a childhood cancer charity, Alex’s Lemonade Stand Foundation. Her major motion picture debut was as Rainelle in the movie ‘Lonely Hearts.’ She has appeared in the Independent film ‘Look’ as Megan, a girl who was being watched and followed by a Kidnapper. In 2013 Bailee began playing the role of Hillary on the TV sitcom, ‘Trophy Wife’ after replacing Gianna LePera who played the character in the initial episodes. American People
American Women
Florida Actresses
Libra Actresses
American Actresses
The Meteoric Rise To Stardom
Bailee Madison has always been inclined towards acting and performing, which explains why she took up acting at such an early stage of her childhood. Her mother Patricia Riley, who is an actress too has always been encouraging and supports her daughter in this industry. She got her first big break in movies when she starred in ‘Lonely Hearts’ as Rainelle Downing in the year 2006, and that is exactly when everyone knew that she was meant to be in the acting industry. She has won many awards on the basis of her talent and versatility. Her acting skills, pretty face and a good heart have gained her a lot of devoted and loving fans over the years. For her supporting yet noticeable portrayal of Isabelle Cahill in the 2009 film, ‘Brothers’, she was nominated for a Saturn Award as well as a BFCA Critics’ Choice Award. Her distinctive style of acting and body language helped her bag a lot of good lead as well as supporting roles in many well-known movies. She has come a long way from where she started out and she has gained a lot of fame and respect as an actor in the eyes of the audience. 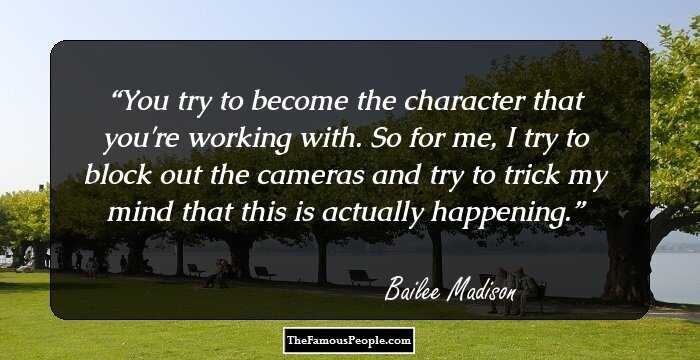 Quotes: Character
Continue Reading Below
What Makes Bailee Madison So Special
What sets Bailee Madison apart from the rest, are her unique acting skills. The way she delivers her dialogues is different from that of any other. She has worked with some of the biggest names in Hollywood, which is a very big accomplishment for someone her age. She found her calling at a very young age and worked towards achieving her aspirations religiously. Not many people her age know what they want to do with their lives; but Madison always knew what she wanted and when she achieved it, she became an inspiration to many across the globe.

monitor moments on the set of #DifferentFolks . Having the absolute best time ❤️?? @freeform 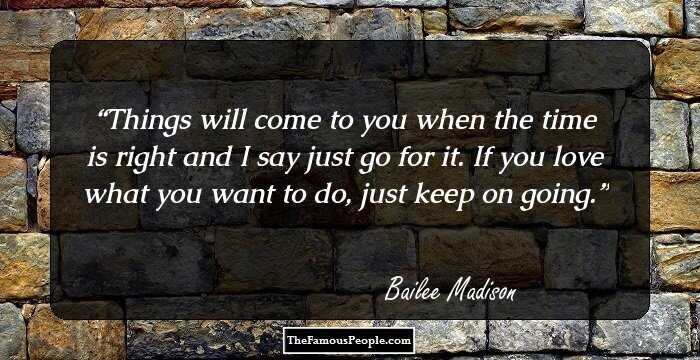 Beyond Fame
Madison is an accomplished actress; so it is clear that she has a lot of fans and followers who keep up with everything she does. However, she has not let all the fame get to her head. She has always been able to manage her personal and professional life extremely well and has never been a part of any major scandals nor needed any negative publicity to take her forward. She has a special connection with her fans which is why her fans so devoutly keep up with her. She also has a YouTube channel on which she posts videos of what she does in her day-to-day life just to keep her fans updated.

@billboard’s #FanArmyFaceOff has been AMAZING! Thank you for letting me be your host, I had the best time and met some amazing fan army members along the way. Now, it's up to YOU to vote now in the FINALS, #Echelon vs. #Queens ! Who will win? Much thanks to my @billboard and @airheadscandy family for all the fun, laughs, memories and sweet treats. Grateful and humbled! Until next time, xoxo Bailee @mtye 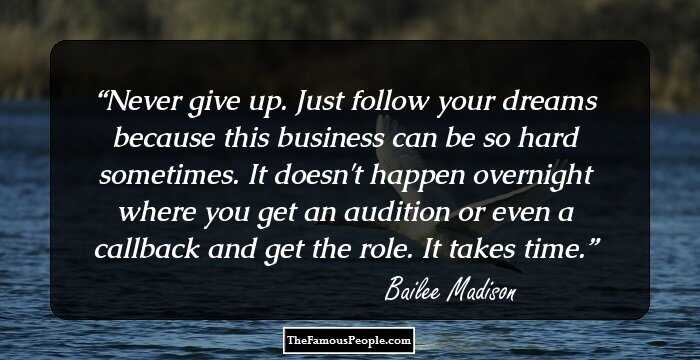 Behind The Curtains
Bailee’s family has always been encouraging and supportive towards her career choices. They’ve always had her back and support her through her downfalls by loving her unconditionally. Her sister and her mother are actors too, so she gets their good advice whenever needed. Madison like any other teenager loves spending time with her friends, which is clear through her Instagram posts. She was publically in a relationship with Emery Kelly, a member of the boy band that appeared in the ‘X-Factor’, but they are no longer together. She recently told her fans via an Instagram post that she has a new boyfriend. She hasn’t yet revealed his name but, rumor has it that he is model Alex Lange.

We’re down to the semis! Watch @billboard and I take #FanArmyFaceOff to Toronto with @airheadscandy! Link in bio!

Quotes By Bailee Madison | Quote Of The Day | Top 100 Quotes