B.B. King was an American singer and guitarist, counted amongst the greatest guitarists of all time. Regarded as one of the most influential blues musicians of all time, he was often called "The King of the Blues", and is credited to have made the genre of blues popular all over the world. Born to sharecroppers on a cotton plantation in Mississippi, he came from a family of very humble means. He loved music from a young age and harbored the dream of making it big as a famous musician. He fell in love with the guitar and taught himself to play the instrument. An ambitious individual, he moved to Memphis in order to make a career for himself and found his big break when he performed on Sonny Boy Williamson’s radio program on KWEM out of West Memphis. The success of the show ensured that he received steady engagements and eventually he started recording. Following the success of his super-hit, ‘3 O’Clock Blues’, he started touring extensively, which made him a much popular figure and earned him a huge fan following. Over the next few years he developed his own unique style of playing the guitar, combining the elements of traditional blues, jazz, swing, and mainstream pop. For decades, he reigned as the undisputed king of blues and died in 2015 at the age of 89 Also Known As: Riley B. King

American Celebrities
African American Men
Guitarists
Black Singers
Black Musicians
Childhood & Early Life
He was born as Riley B. King on September 16, 1925, in Mississippi to Albert and Nora Ella King. His parents were sharecroppers on a cotton plantation. His mother abandoned the family when Riley was young and thus he was raised by his maternal grandmother.
He was interested in music from a young age and received his first guitar at the age of 12. Soon he taught himself to play the instrument and started playing on street corners to earn some money.
As a young man he acquired the nickname "the Beale Street Blues Boy" which was later shortened to just “B.B.”. 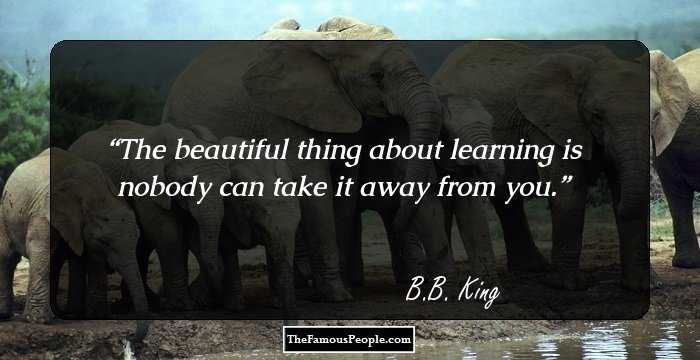 Quotes: You, Beautiful, Learning
Continue Reading Below
You May Like

Who Is The Most Popular BTS Member?
Career
He moved to Memphis to embark on a musical career. He got a chance to perform on Sonny Boy Williamson’s radio program on KWEM, following which he gained some popularity.
He soon started receiving offers to perform at different avenues and earned a ten-minute spot on the Memphis radio station WDIA. The spot became an instant hit and it was later expanded into the Sepia Swing Club.
In 1949, he began recording songs. Even though his initial recordings were not much successful, he got a big breakthrough with his 1952 single, ‘3 O'Clock Blues’, which peaked at No. 1 on the Billboard Rhythm and Blues charts and effectively launched his career.
Propelled by the success of this single, he began touring extensively. By the mid-1950s he gained a reputation for performing in hundreds of shows in a year—in 1956, he along with his band played an astonishing 342 one-night stands.
He became the uncrowned king of blues and one of the most influential names in R&B music in the 1950s. Some of the super-hits he produced in the decade are ‘You Know I Love You’, ‘Woke Up This Morning’, ‘Please Love Me’, ‘When My Heart Beats like a Hammer’, ‘Whole Lotta Love’, and ‘You Upset Me Baby’.
His streak of success continued throughout the 1960s. By this time he had a new manager Sid Seidenberg who ensured that B.B. achieved popularity among the white crowd as well. He played at the Newport Folk Festival and at Bill Graham’s Fillmore West in 1968 which helped to further popularize his image.
He was as prolific as ever during the 1970s and 1980s, touring frequently and releasing albums. His notable albums from this time include ‘B.B. King in London’ (1971), ‘To Know You Is to Love You’ (1973), ‘Friends’ (1974), ‘Midnight Believer’ (1978), ‘Take It Home’ (1979), ‘Love Me Tender’ (1982), and ‘King of the Blues: 1989’ (1988).
In 1991, B.B. King's Blues Club opened on Beale Street in Memphis. A second club followed suit at Universal City Walk in Los Angeles in 1994. Over the next few years, many more such clubs were established. 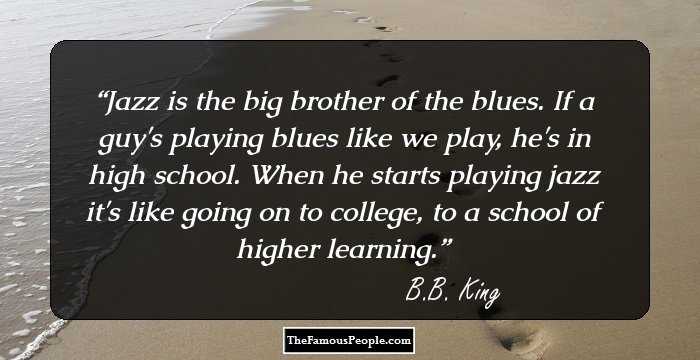 Quotes: Like, Learning
Continue Reading Below
Major Works
The blues album, ‘Riding with the King’, released by King in collaboration with Eric Clapton was his most commercially successful album. The album peaked at No. 1 on the Billboard's Top Blues Albums and was certified Multi-Platinum in the United States.
Awards & Achievements
He was inducted into the Blues Foundation Hall of Fame in 1984 and into the Rock and Roll Hall of Fame in 1987.
B.B. King was the recipient of numerous Grammy Awards and was presented with a Grammy Lifetime Achievement Award in 1987.
In 1995 he was awarded the Kennedy Center Honors which is given to recognize "the lifelong accomplishments and extraordinary talents of our nation's most prestigious artists”.
The Royal Swedish Academy of Music awarded him the Polar Music Prize for his "significant contributions to the blues" in 2004.
In 2006, President George W. Bush awarded King the Presidential Medal of Freedom. 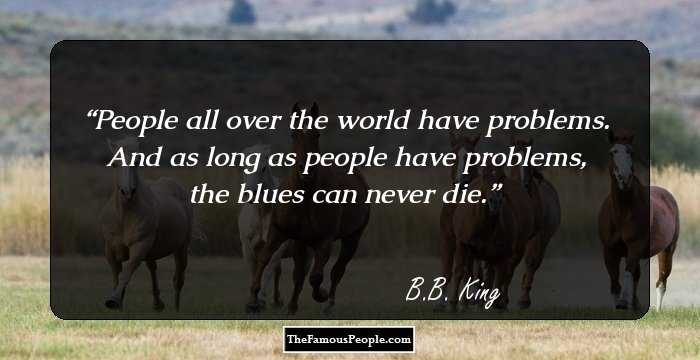 Quotes: Never
Personal Life & legacy
B.B. King married Martha Lee Denton in 1946. This marriage did not last long and ended in 1952.
He tied the knot for the second time with Sue Carol Hall in 1958. This marriage too ended in 1966.
It is reported that he had been involved with other several women as well and had fathered 15 children.
He remained active throughout his life. He suffered from diabetes and died in his sleep on May 14, 2015 of complications from the disease.
Trivia
He was an official supporter of the nonprofit organization Little Kids Rock that provides free musical instruments and instruction to underprivileged children.

See the events in life of B.B. King in Chronological Order