(British Actress Who was Famous as a Film and Fashion Icon)

Audrey Hepburn was one of the most graceful actresses of the film industry. She has been an eye-witness to World War II, and faced numerous struggles through it. This talented actress had an affinity to dance and did all it took to get trained in ballet dancing. Her first significant role was as a ballerina where she choreographed her own moves which were highly praised. She lived with her mother and did modelling to earn a livelihood. This actress was engaged with the theatre and this got her noticed as an actress which eventually ushered her into the film industry. Her debut film was a huge success and she even received the ‘Academy Award for Best Actress’ for that particular film. Hepburn herself did not know that she could act but she did work hard and rehearsed passionately to prepare herself for the roles she played. This arduous practice helped her rise into fame and became one of the best known actresses of Hollywood. This skilful actress has been through several upheavals throughout her life like divorces and miscarriages but she faced them all very bravely and overcame her grief. She had a philanthropic side and was engaged in many humanitarian works were recognized by many organizations even posthumously

Cause of Death: Appendiceal Cancer

Humanitarian Work: She has been a Goodwill Ambassador of UNICEF

British Celebrities
British Women
Taurus Actresses
British Actresses
Women Film & Theater Personalities
Childhood & Early Life
She was born to Joseph Victory Anthony Ruston and Ella van Heemstra on 4th May, 1929 in Brussels, Belgium.
Her parents separated when she was a child and after that she lived with her mother in London. She attended a boarding school in England and later, moved to Netherlands with her mother during World War II, where she attended the institute named ‘Arnhem Conservatory’.
During the same time, she was learning ballet and after the war was over, she received ballet training in Amsterdam and then in London. She was engaged in modelling and dancing projects and at the same time took acting classes. 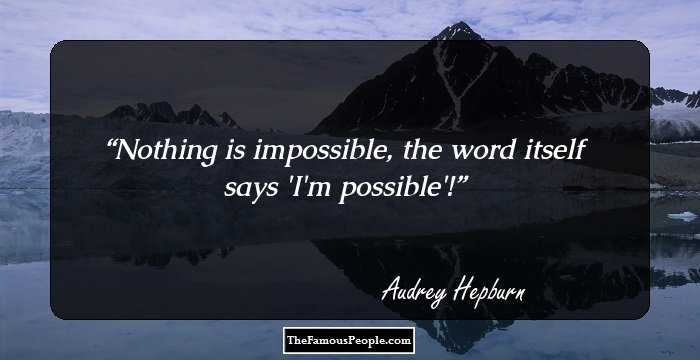 Continue Reading Below
Career
In 1948, she appeared as a chorus girl in the musical named ‘High Button Shoes’ which was her first stage performance. This was followed by many more stage performances.
In 1949, she again joined in a chorus in ‘Sauce Tartare’ and the following year; she worked in the musical ‘Sauce Piquante’. She also had minor roles in movies like ‘Laughter in Paradise’, ‘One Wild Oat’, ‘The Lavender Hill Mob’ and ‘Young Wives’ Tale’.
During the period 1951-53, she performed the lead role in the play ‘Gigi’ which became a success and Hepburn’s potential in acting was recognized.
Her first elaborate role was as a supporting actress in the film ‘The Secret People’ in the year 1952, where she was portrayed as a ballet dancer. The same year, she also worked in the movie named ‘Nous Irons a Monte Carlo’ (We Will Go To Monte Carlo).
She then, got her major breakthrough in the year 1953, when she was cast in the lead role of Princess Anne in the film ‘Roman Holiday’ along with actor Gregory peck. This was followed by her film ‘Sabrina’ which too was a success as a ‘Roman Holiday’.
Her acquaintance Mel Ferrer asked her to perform in Broadway along with him in ‘Ondine’. This acquaintance later, became Hepburn’s husband and in 1956, the couple, worked together in the film ‘War and Peace’ based on Leo Tolstoy’s novel by the same name.
During the period 1957-60, she worked in a few films such as ‘Love in the Afternoon’, ‘Funny Face’, ‘Mayerling’, ‘Green Mansions’, ‘The Nun’s Story’,’ The Unforgiven’.
Hepburn’s career got a kick start and she worked with numerous industry stalwarts which contributed to her successful career.
In 1960, she started working on the screen adaptation of Truman Capote’s novel ‘Breakfast at Tiffany’s’ which was released the next year. She then worked in the movie ‘The Children’s Hour’.
Continue Reading Below
This actress took some time off from her career and devoted her time to her son Sean and family. After she resumed work, she again starred in many movies during the period 1963-67, such as ‘Charade’, ‘Paris When It Sizzles’, ‘My Fair Lady’, ‘How to Steal a Million’, ‘Two For the Road’, ‘Wait Until Dark’.
She again took a second break from acting for about nine years, and was back with the movie ‘Robin and Marian’ in 1976. This was followed by a few more movies such as ‘Bloodline’, ‘They All Laughed’ and ‘Always’, after which she could not continue her career due to illness. 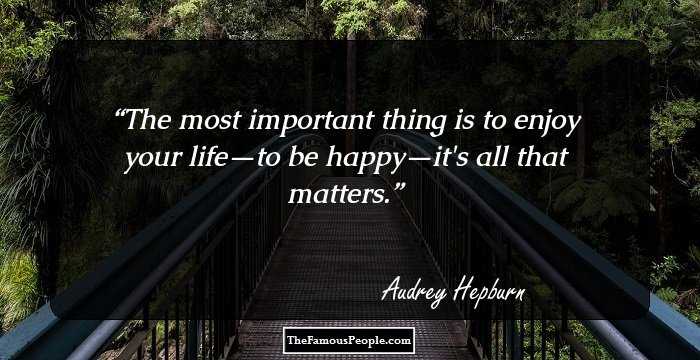 Major Works
Her debut movie in a leading role ‘Roman Holiday’ was acclaimed by the critics as well as the audience which shot her to fame. For this she even got the ‘Academy Award for Best Actress’ and many other awards.
Her role in the movie ‘Breakfast at Tiffany’s’ earned her much acclamation as an actor and the character of Holly Golightly which she played in the movie has set a benchmark in American cinema.
Awards & Achievements
This versatile actress was named the ‘Promising Personalities’ of 1951-52 at the ‘Theatre World Awards’. She has also been awarded the ‘Billboard Annual Donaldson Award’ for Outstanding Achievement in Theatre in the year 1952.
She was a recipient of the ‘Oscar’ in the Best Actress category for her movie ‘Roman Holiday’ in the year 1954. She received the ‘BAFTA Award for Best British Actress in a Leading Role’ and ‘Golden Globe Award for Best Actress – Motion Picture Drama’ for the same film.
In 1954, she was awarded the ‘Tony Award’ in Best Dramatic Actress for ‘Ondine’ by the ‘American Theatre Wing and The League of American Theatres and Producers.
In 1958, she received the ‘Golden Laurel Award’ in Top Female Comedy Performance for ‘Love in the Afternoon’.
Continue Reading Below
In 1960, she was awarded the ‘Hollywood Walk of Fame Star’ in ‘Motion Picture Category. The same year, she received the ‘NYFCC Best Actress Award’ for her film ‘The Nun’s Story’.
In 1962, she received the ‘David di Donatello Best Foreign Actress Award’ for the film ‘Breakfast at Tiffany’s’.
In 1965, she received the ‘NYFCC Best Actress Award’ and also the ‘David di Donatello Best Foreign Actress Award’ for ‘My Fair Lady’.
In 1992, she was awarded the ‘BAFTA Lifetime Achievements Award’. Apart from all these, she also received many awards for her humanitarian works. 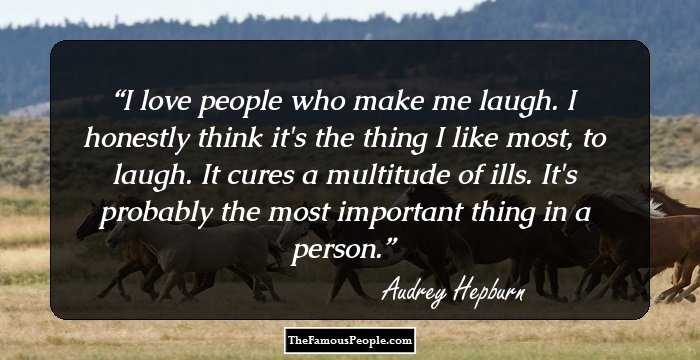 Quotes: Me, Love, Think, Like, I
Personal Life & Legacy
In September 1954, she married a co-actor Mel Ferrer with whom he had a son named Sean. However, the couple divorced after a fourteen year long relationship.
In 1959, a street in Doorn, Netherlands was named after her as ‘Audrey Hepburn Laan’ (Audrey Hepburn Lane).
In January 1969, she married for a second time to Andrea Dotti, who was an Italian Psychiatrist whom she encountered on a cruise trip. The couple was blessed with a son named Luca Dotti. The couple separated after being married for thirteen years.
She then found a friend and confidante in actor Robet Wolders with whom she shared many common interests and although they did not marry, they both were together until Hepburn’s death.
In 1992, she was awarded with the ‘Presidential Medal of Freedom’ for her humanitarian works.
After suffering from appendiceal cancer for a long time, this graceful actress breathed her last on 20th January, 1993.
In the New York head quarter of UNICEF, a statue of hers is placed called ‘The Spirit of Audrey’ which was revealed in the year 2002.
Trivia
One of her favourite poems is Rabindranath Tagore’s ‘Unending Love’

Quotes By Audrey Hepburn | Quote Of The Day | Top 100 Quotes

See the events in life of Audrey Hepburn in Chronological Order