AshleyTheUnicorn is an American YouTube gamer who creates Roblox and Minecraft content. Her real name is Ashley Tejani. A Texas native, Ashley spent a part of her life in Georgia and attended a high school there. She has always been interested in gaming. In January 2012, she set up her YouTube account under the username Ashelycoin. In October 2016, she began posting content on it. Since then, the channel has experienced exponential growth. She has over a half a million subscribers and about 100 million views in total. These days, each of her videos receives tens of thousands of views. She publishes a variety of content, from game secrets to glitches to mods to roleplay. Her popularity on YouTube has transcended to other social media platforms as well. She has several thousand followers on Instagram, as well as Twitter. She has a secondary YouTube account under her real name. On it, she primarily posts vlogs, challenges, and miscellaneous videos. American People
Texas YouTubers
Female Gamers
Aries Youtubers
American Gamers
Rise to Fame
Ashley Tejani created her channel on January 22, 2016. The original name of her channel was ‘Ashelycoin,’ which she later changed to ‘AshleyTheUnicorn.’ Her first video on the platform, titled ‘How to Breed, Tame and Decorate a Llama in Minecraft 1.11 | New Mob Tutorial’, was posted on October 3, 2016. She received some criticism for it as she had committed an error while breeding the llamas and had to address it in the comment section. She uploaded her second video, ‘Q&A | Answers | 1000 Subs’, on November 21, 2016. Her first few videos were exclusively on Minecraft. On December 4, 2016, she posted her first Roblox video, titled ‘Roblox | Unturned in Roblox? | The Island’. Since then, she has produced a multitude of videos on hacking, glitches, mods, roleplay, and more.
Recommended Lists:

Aries Women
Her secondary channel, which she set up under her real name on October 29, 2018, has accumulated more than 20 thousand subscribers and several hundred thousand views in total to date. The first video on the channel was uploaded on November 1, 2018. Titled ‘I Went Trick or Treating at 18 years old...| College Day in My Life’, it serves as the perfect introduction to the content she has on this channel. Most of her videos revolve around her college life. There are vlogs and challenge videos as well.

Who Is The Most Popular BTS Member?
Continue Reading Below
Family & Personal Life
Ashley Tejani was born on April 6, 2000, in Texas, USA. At some point, she moved to Georgia, where she studied at Peachtree Ridge High School in Suwanee. After graduating high school, she came back to Texas to enrol at the University of Texas at Austin in 2018, pursuing a bachelor’s degree in business administration. She is set to graduate in 2022. Tejani is of Indian descent and has a sister. 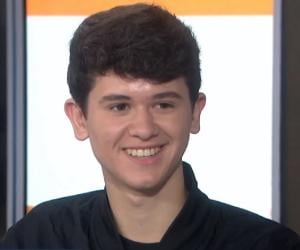