FaZe Sway is an American professional 'Fortnite' gamer who rose to prominence after joining the 'FaZe Clan.' He was a gaming enthusiast since his childhood and began his gaming career in his teenage years. He was initially an independent gamer and produced content for his 'YouTube' channel and other social-media pages. Since the beginning of his career, Sway has been an avid 'Fortnite' player. His channel is packed with montages and gameplays of 'Fortnite,' which have earned him more than 63 million views. He joined the 'FaZe Clan,’ which gave a boost to his gaming career. Though he has just started playing as a 'FaZe' member on the international platform, Sway has already been featured on the list of the most famous 'Fortnite' players of all time, due to his incredible gaming skills. He is also known as the second-youngest member of the ‘Faze Clan.’ American People
Male Youtubers
Cancer Youtubers
American Gamers
American YouTubers
Rise to Fame
Sway began his career as an online gamer with his 'YouTube' channel. He created the channel in June 2013. However, he did not post anything on the channel until March 2017. His first video on the channel was 'Easy De Atomizer.' Sway primarily posts 'Fortnite' gameplays and montages on the channel. His first 'Fortnite video to earn a million views was 'FaZe Sway vs Ghost Aydan.' Some of Sway's most-watched videos are 'Sway's Highground Techniques Tutorial,' 'Sway's Settings,' 'Hi I'm FaZe Sway,' 'My Settings,' '34 Kills Season 9 On Controller,' and 'Handcam.' The last video currently has more than two million views, the highest on the channel.
Recommended Lists:

Cancer Men
Over a million 'YouTube' users have subscribed to Sway's channel. Sway posts 'Fortnite' content on his 'Instagram' and 'Twitter' accounts, too, where he has earned around 845 thousand and 146 thousand followers, respectively.
Sway's gaming career leaped after he was promoted by the most popular e-sports organization in the world, 'FaZe Clan.' He joined the clan in the middle of March 2019. His inclusion was covered by 'Dexerto,' the world's most extensive e-sports news and media entertainment network. As a 'FaZe' member, Sway has made a distinct identity for himself, considering the clan consists of professional players. Sway's unique feature as a gamer is that he uses the 'Dark Bomber' skin exclusively.
Additionally, Sway has exceptional editing skills. Sway's precision at aiming at his “enemies” is known to many. Sway's shooting accuracy is also praised by many. This deadly combination makes him a terrifying opponent in any 'Fortnite' build fight. Sway often teams up with fellow 'FaZe' member Cizzorz for 'Fortnite' battles.
Sway was the youngest of the 'FaZe' clan members until 13-year-old H1ghsky1 joined the clan toward the end of March 2019. Sway never revealed his face until he became a 'Faze' member. On April 2, 2019, the 'YouTube' channel named 'Amp Gaming' published a video titled 'FAZE SWAY FACE REVEAL “OFFICIAL”.
You May Like

Famous Beautiful Women With Green Eyes
Continue Reading Below
Family & Personal Life
Sway was born on July1, 2003, in the US. His real name is Josue. 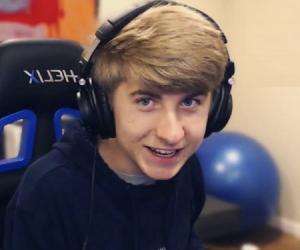