Advanced Search
Ashley Hamilton is an American singer-songwriter, actor, and comedian. He is best known for playing Cole Deschanel on ‘NBC’ series ‘Sunset Beach.’ As a singer-songwriter, Hamilton led a Los Angeles-based rock band named ‘Fine.’ In June 2003, his song ‘Wimmin’ peaked at number 27 in the ‘UK Singles Chart.’ He has also worked with popular musicians, such as Robert Peter Williams, Hilary Duff, and Scott Weiland. Hamilton started performing stand-up comedy from 2007. He has performed at many comedy clubs, including ‘The Comedy Store,’ ‘Room 5,’ and ‘Hollywood Improv.’ In 2009, Hamilton took part in the popular dance competition television series ‘Dancing with the Stars’ where he danced along with Polish ballroom dancer Edyta Śliwińska. American People
Comedians
Lyricists & Songwriters
American Men
California Actors
Childhood & Early Life
Ashley George Hamilton was born on September 30, 1974, in Los Angeles, California, USA, to Alana Stewart and George Hamilton. He went to ‘Beverly Hills High School,’ which boasts of a number of famous alumni, including Angelina Jolie, Gabriel Macht, and Nicolas Cage among other Hollywood stars.
In 1992, he suffered a motorcycle accident, which left him bedridden for two months.
In 1993, he appeared in the famous late-night television variety show ‘Saturday Night Live.’ In the same year, he was included in ‘People’ magazine's list of ‘50 most beautiful people in the world.’
Continue Reading Below
Recommended Lists:

California Musicians
Tall Celebrities
Tall Male Celebrities
Libra Actors
Career
Ashley Hamilton made his acting debut in 1993, when he was cast to play Taylor Devereaux in Rod Daniel-directed children's film ‘Beethoven's 2nd.’ The following year, he starred opposite Jennifer McComb in a film titled ‘Lost in Africa.’
In 1987, he received his breakthrough role of Cole Deschanel in 14 episodes of ‘NBC’ network's series ‘Sunset Beach.’ In 1998, he was seen in a drama film titled ‘Not Even the Trees.’
Led by Ashley Hamilton, the Los Angeles-based rock band ‘Fine’ released its debut album, ‘Against the View,’ in 1999. In 2001, he played Maurice Dupres in Manuel Gómez Pereira-directed Spanish-British-Italian comedy film ‘Off Key.’ The following year, he played Joe the Drummer in Paul Quinn-directed drama film ‘Never Get Outta the Boat.’
In 2003, Hamilton joined hands with popular English singer-songwriter Robbie Williams to come up with a song titled ‘Wimmin.’ Released in June 2003, the song peaked at number 27 in the ‘UK Singles Chart.’ In the same year, he also co-wrote Williams' hit single ‘Come Undone.’
In 2006, he played the lead role in Candance Gosch-directed sci-fi fantasy television film ‘Dreamweaver.’ He also played Tom in Nick Cohen-directed horror film ‘Voodoo Lagoon.’ Hamilton claimed that he co-wrote Robbie Williams' 2007 single, ‘She's Madonna,’ and also said that Williams failed to credit him for the lyrics.
Hamilton started performing stand-up comedy from 2007. He went on to perform in popular comedy clubs across Los Angeles and West Hollywood. In 2008, he appeared in Rachel Lee Goldenberg-directed musical film mockbuster ‘Sunday School Musical.’ The following year, he played Iverson in a short film titled ‘Cruel and Unusual.’
On August 17, 2009, it was announced that Ashley Hamilton would be competing in the ninth season of ‘Dancing with the Stars.’ Professional ballroom dancer Edyta Śliwińska was his partner. Hamilton was, however, the first celebrity to be eliminated from the show on September 23, 2009.
In 2012, he played Devlin Grant in one of the episodes of an anthology television series titled ‘Femme Fatales.’ In the same year, he also played Bruce in Phedon Papamichael-directed independent comedy-drama film ‘Lost Angeles.’ The film premiered at the ‘Oldenburg International Film Festival’ on September 16, 2012.
Hamilton played Jack Taggert in the 2013 superhero film ‘Iron Man 3.’ He also recorded the cover version of Sly Fox's song ‘Let's Go All the Way’ for the film. The song was recorded along with Robbie Williams and the popular rock super-group ‘The Wondergirls.’ The following year, he played Donny in Antonia Bogdanovich-directed crime-drama thriller film ‘Phantom Halo’ and then played Bell in a sci-fi short film titled ‘Implant.’
Continue Reading Below
He played Rudolf in the 2016 Warren Beatty-directed romantic comedy-drama film ‘Rules Don't Apply.’
In 2018, he directed an erotic horror film titled ‘Gothic Harvest.’ Apart from directing, he also played a supporting role in the film. In the same year, he was also cast to play a prominent role in ‘Tranzloco.’
Ashley Hamilton has also appeared in many popular television shows. In 2003, he made a guest appearance in the famous TV series ‘V Graham Norton.’ In 2009, he was seen in ‘Jimmy Kimmel Live!’
In 2015, he appeared as himself in the long-running TV series ‘Entertainment Tonight.’ In the same year, he was seen in eight episodes of the famous reality documentary television series ‘Stewarts & Hamiltons.’
Recommended Lists:

Libra Singers
Male Singers
Libra Musicians
Male Musicians
Family & Personal Life
Ashley Hamilton’s father, George Stevens Hamilton, is a famous film and television actor. He is best known for playing prominent roles in films like ‘Home from the Hill,’ ‘Light in the Piazza,’ ‘Once Is Not Enough,’ and ‘8 Heads in a Duffel Bag.’
His mother, Alana Hamilton Stewart, is a former model and actress. She has acted in films such as ‘Where the Boys Are '84,’ ‘Night Call Nurses,’ ‘Wasted in Babylon,’ and ‘Mom, Can I Keep Her?’
Hamilton took everyone by surprise when he married actress Shannen Doherty on September 24, 1993. He was only 19. Their marriage, however, ended in divorce on November 7, 1994.
Thereafter, he married actress Angie Everhart on December 1, 1996. This marriage, too, ended in divorce in 1997.
In 2015, Hamilton was arrested for impersonating a police officer.
He started dating Renee Karalian sometime in 2015. They have a daughter, Willow.
Recommended Lists:

See the events in life of Ashley Hamilton in Chronological Order 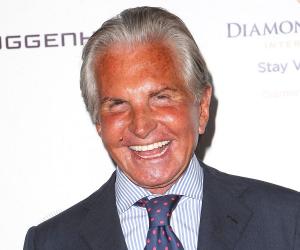