Conservative political commentator Ann Coulter is known for her sharp tongue and ruthless commentary that spares none of those who support a different political ideology. A Republican to the extreme, she adopts a confrontational tone of commentary and writing. She has served as a columnist, regular or otherwise, for various newspapers and magazines. She has also authored several books on political issues, many of which have been listed on the New York Times Bestseller List. A lawyer specializing in corporate law, she chose to quit her private practice and work for the U.S Senate Judicial Committee. She would later serve as the litigator for the Center of Individual Rights. An ardent supporter of conservatism, she writes columns and articles for several conservative newspapers, magazines and websites. She is notorious for her bitter criticisms and insensitive remarks about almost everything, and this trait has made her someone people love to hate. But she also has fans who admire her for her guts—she is not someone who shies away from controversy. She has also made several radio and television appearances. She once worked as a legal correspondent for MSNBC and was fired because of her behaviour. Andy Cohen
DID WE MISS SOMEONE?
CLICK HERE AND TELL US
WE'LL MAKE SURE
THEY'RE HERE A.S.A.P
Quick Facts

American People
Non-Fiction Writers
American Women
Cornell University
University Of Michigan
Childhood & Early Life
Ann Coulter was born to John Vincent Coulter and Nell Coulter. She has two brothers.
She attended New Canaan High School and graduated in 1980.
She went to Cornell University where she helped found ‘The Cornell Review’. She graduated with honours in 1984 with a B.A. in history.
She earned a law degree from the University of Michigan Law School in 1988. There, she also served as an editor of the Michigan Law Review, and was trained at the National Journalism Center. 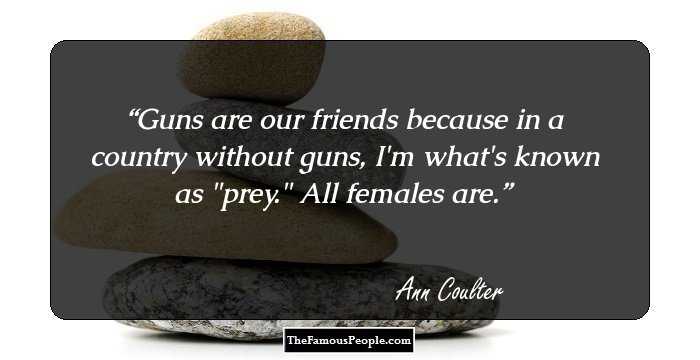 Quotes: Friends
Continue Reading Below
Career
She started her career as a law clerk for Pasco Bowman II of the U.S Court of Appeals for the Eighth Circuit.
In 1994, she was appointed to work for the U.S Senate Judiciary Committee after the Republican Party came to power. She worked under Senator Spencer Abraham and handled crime and immigration issues.
She was made the legal correspondent of the network MSNBC in 1996 but was dismissed in 1997 over her insensitive comments about the late Pamela Harrison during her memorial service.
She was rehired by MSNBC and fired again after eight months over her verbal spat with a disabled Vietnam veteran.
Her first book, ‘High Crimes and Misdemeanors: The Case against Bill Clinton’ was published in 1998. She covered the various controversies surrounding Bill Clinton including his womanizing habits.
Starting from the late 1990s, Coulter has been writing syndicated columns for the Universal Press Syndicate. Her writings have appeared on several conservative publications and websites.
She became a regular columnist for George magazine in 1999 and wrote exclusive weekly columns for the conservative magazine ‘Human Events’ from 1998 till 2003.
‘Slander: Liberal Lies about the American Right’ (2002), her second book, condemned the news media for unfairly criticizing conservatives. The book became a bestseller.
In her book ‘Treason: Liberal Treachery from the Cold War to the War on Terrorism’ published in 2003, Coulter argued that U.S. Senator Joseph McCarthy was a victim of media bias.
Continue Reading Below
A collection of the columns written by her was published as a book ‘How to talk to a Liberal (If you must)’ in 2004. It contained columns on liberalism, war on terror and the media.
Her highly controversial book, ‘Godless: The Church of Liberalism’ was released in 2006. In this book she presented her arguments against American liberalism and criticized the 9/11 widows. Several newspapers which carried her columns dropped them after the publication of this book.
In 2007, she published another book, ‘If Democrats had any Brains, They’d be Republicans’. It comprised a collection of her previously published quotes on topics like terrorism and media bias.
Two years later, her book ‘Guilty: Liberal “Victims” and their Assault on America’ was out in 2009. She argued that the liberals who are always playing the victim are in fact the victimizers.
Her most recent book ‘Mugged: Racial Demagoguery from the Seventies to Obama’ was published in 2012. She discusses issues related to racism and liberalism in this book.
She has also appeared in several television and radio talk shows as a guest, and has appeared in three films. 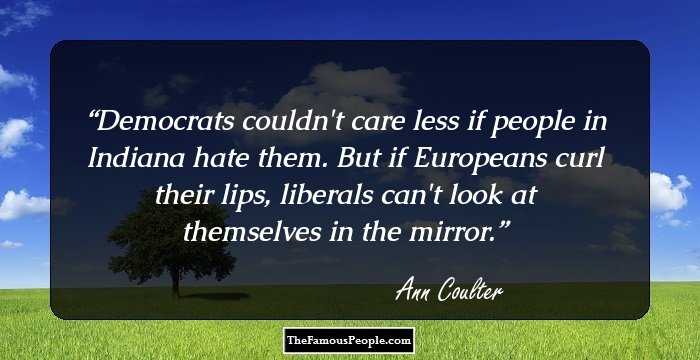 Major Works
Her biggest claim to fame is the fact that she has authored several books on controversial political topics. Seven of her books have made it to the New York Times Bestseller list.
She is famous for her acid tongue and her scathing commentary and writing. She stirs up controversies quite often which helps to keep her in spotlight.
Personal Life & Legacy
She has dated several men including Bob Guccione, Jr., writer Dinesh D’Souza and Andrew Stein. She also got engaged many times, but none of her relationships culminated in marriage. 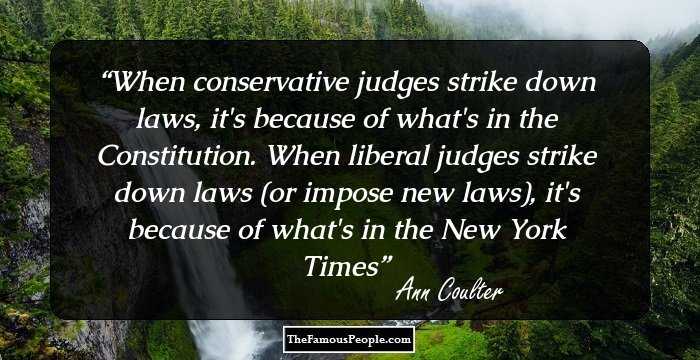 Trivia
She likes to read true crime stories about serial killers.
She once called President Obama a ‘retard’.
She has often been criticized for her racial discrimination.
Recommended Lists:
Media Personalities #612

Quotes By Ann Coulter | Quote Of The Day | Top 100 Quotes

See the events in life of Ann Coulter in Chronological Order