Advanced Search
Anita Baker is an American singer and songwriter who has had a long, glittering career and has eight Grammy Awards till date. Baker’s parents abandoned her at the age of two and she was raised by a foster family in Detroit. Her childhood was understandably a tough one but she got into music from a very early age and before long she started performing in nightclubs in the city. Her specialty was in Rhythm and Blues (R&B) and following a performance at one of those nightclubs, she was offered the chance to join a band named ‘Chapter 8’. However, it was as a solo performer that she really came into the limelight and her very first album titled ‘Rapture’ made her a household name across America. Baker is one of the few artists whose first four albums sold in excess of million copies and remains one of the icons of the R&B genre. Baker decided to take a break in order to bring up her sons and got back to work after a long hiatus, however her stature as an icon was cemented when her comeback album became a big hit. American People
Black Rhythm & Blues Singers
American Women
Short Celebrities
Short Female Celebrities
Childhood & Early Life
Anita Baker was born on January 26 1958, in Toledo, Ohio. She was abandoned by her parents at the age of two and was raised by a foster family in Detroit, Michigan.
Her foster parents passed away when she was only 12 and her foster sister took care of her upbringing after the death of her foster parents.
Baker had an interest in music from an early age and started singing R & B in nightclubs in Detroit by the time she was 16. It was after one of those performances that funk band leader David Washington of ‘Chapter 8’ identified her and asked her to go to go for an audition in order to join the band. 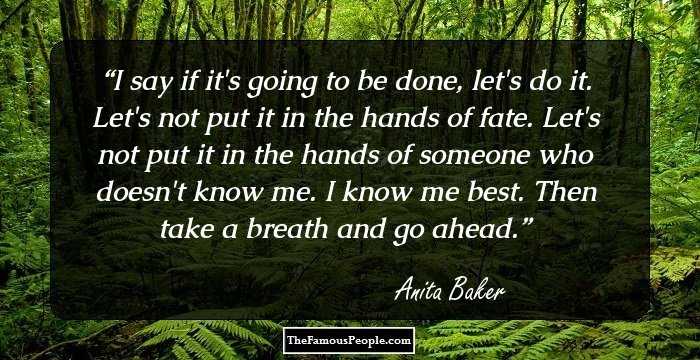 Quotes: Me, I
Continue Reading Below
Career
Baker became a member of the band ‘Chapter 8’ in 1975 and following a string of performances, the band was handed a deal by Ariola Records in 1979.
The group’s first album ‘Chapter 8’ was released in 1979 and featured the singles "Ready for Your Love," a duet between Baker and bandmate Gerald Lyles, and the Baker-led "I Just Want to Be Your Girl."
In 1979, Ariola Records was taken over by Arista Records and Chapter 8 lost their contract as Arista Records was of the view that Baker was not fit to be the group’s lead singer.
Baker went back to Detroit and worked as a waitress and a receptionist for a law firm. In 1983, she released her debut solo album, 'The Songstress', under the Beverly Glen label. The album was a popular one and many of the songs made it to the music charts.
Following the release of the album she had a protracted legal battle with the Beverly Glen label over payment of royalties and breach of contract issues. She won the case against the label in 1985.
In 1985, she signed a contract with Elektra Records label and came out with her second album 'Rapture' in 1986. The album became a big hit, with over eight million copies sold worldwide and also led to ‘The Rapture Tour’.
In 1988, Baker released her third album titled ‘Giving You the Best That I Got’ it immediately became a big hit. The title song and the song ‘Just Because’ became chart toppers.
In 1990, she released the album ‘Compositions’ and songs like ‘Talk to Me’ and ‘Fairy Tales’ propelled the album past the million copies threshold in terms of sales. The songs were inspired by jazz music and Baker as involved with the song writing process as well.
After taking a brief hiatus from music, Baker came out with her 5th album ‘Rhythm of Love’ in 1994 and its song ‘Body and Soul’ became a chat topper. The album was an instant hit and sold in excess of two million copies making her one of her one of the few artists to have had the distinction of having four straight platinum selling albums. Towards the end of the year, she also took part in a ‘Rhythm of Love World Tour’ that went on for 11 months.
Continue Reading Below
Baker took a hiatus from music in order to look after her family and went back to recording in 2000 but all her recordings were were ruined by random popping noises from the rented 24-track tape machine.
In 2004, she released the album ‘My Everything’ and in spite of the fact that she had returned to music after a considerable period of time, the album was appreciated by music fans and was certified gold. A year later, she released the album ‘Christmas Fantasy’.
In 2007, she embarked on a two-year concert tour titled 'An Evening with Anita Baker' and performed at different events.
Baker released her own version of the song titled “Lately” in 2012 and the song became quite popular. She has been working on the album featuring the single, "Only Forever", since 2010 but the release date of the album has still not been finalised.
Major Works
Baker’s most important work in her career was the album ‘Rapture’ which sold more than eight million copies. Baker also won two Grammy Awards in recognition of her efforts for that album.
Awards & Achievements
In 1987, Baker won the Grammy Awards for Best R&B Vocal Performance, Female for ‘Rapture’ and the Best Rhythm & Blues Song for the song ‘Sweet Love’.In 1988, she won the Grammy Award for Best Soul Gospel Performance by a Duo, Group, Choir or Chorus for the song ‘Ain't No Need to Worry’.
In 1989, Baker won the Grammy Awards for Best R&B Vocal Performance, Female and the Best Rhythm & Blues Song for the song ‘Giving You The Best That I Got’.
In 1991, she won the Grammy Awards for Best R&B Vocal Performance, Female for ‘Compositions’. In 1996, she won the Grammy Award for Best Female R&B Vocal Performance for the song ‘I Apologize’.
Personal Life & Legacy
On December 24, 1988 Baker got married to Walter Bridgeforth Jr. However, the marriage ended in a divorce in 2007. The couple has two children, both sons, named Walter Baker Bridgeforth and Edward Carlton Bridgeforth.

See the events in life of Anita Baker in Chronological Order