Alicia Silverstone is an American actress best-known for her role in the film Clueless. She began her acting career at a very young age and went on to become a teenage sensation and idol. She was also considered to be one of the most appealing actresses in Hollywood after she appeared in an Aerosmith music video, playing a foxy, rebellious teenager. After her excellent performance in the film Clueless, she signed a multi-million dollar deal with Columbia-TriStar and also set up her own production company. However, she never seemed to find much success after her film Clueless, but did manage to catch the attention of the critics with her performance as Batgirl in Batman & Robin. She appeared in a number of roles in films of different genres, such as Beauty Shop, Stormbreaker, Excess Baggage, and Blast from the Past. Apart from her career in films, she has also appeared as a matchmaker in a television series titled Miss Match. She is also active in a number of charitable causes. She has managed to present herself as an ideal lifestyle icon by promoting veganism and supporting animal rights. Alicia Silverstone also has her very own cookbook The Kind Diet. Alicia Silverstone was born on October 4, 1976, in Hillsborough, California, USA, to Monty Silverstone and Deirdre Radford. She has a half-brother and a half-sister from her father’s previous marriage.

She had a typical upper-middle class upbringing and grew up in San Francisco. At the age of six, she began modeling and consequently appeared in her first television commercial for Domino’s Pizza.

Alicia Silverstone studied at Crocker Middle School and San Mateo High School. In 1992, she landed her first accredited role in the show The Wonder Years in which she played the character of Jessica Thomas. 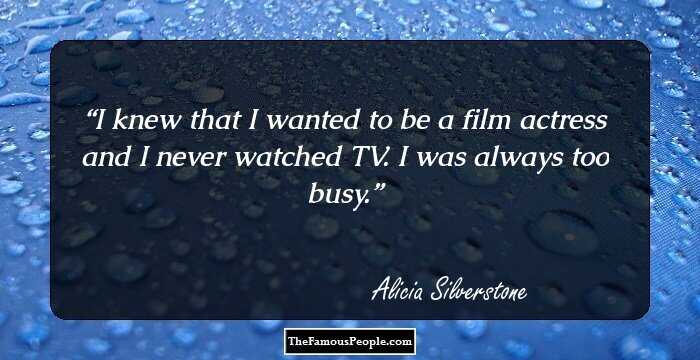 She landed the role of an antagonist in the film The Crush, which released in 1993. Her performance garnered the praises of critics and audience and she went on to win accolades for her role. The same year, she was seen in two of Aerosmith’s music videos, Cryin and Amazing.

In 1993, she was also seen in television films, such as Torch Song and Scattered Dreams. This was followed by her starring role in a television film titled Cool and the Crazy (1994).

In 1995, she received her biggest break as an actress with her role as Cher Horowitz in the sleeper hit film Clueless. She then signed a deal worth $8-10 million with Columbia-TriStar.

The same year, she also starred in films like Le Nouveau Monde, Hideaway, and The Babysitter which made 1995 an extremely busy year for the actress.

From 1996 to 1998, she was cast in films like True Crime, Batman & Robin, and Excess Baggage. She was also seen in an episode of the television show Wildlife Vet.

In 2000, she was cast as The Princess of France in the movie Love’s Labor Lost. Subsequently, she voiced Sharon Spitz for the show Braceface from 2001 to 2003; she had a recurrent role in the show.

Meanwhile in 2002, she was cast as Natalie “Nat” Bevin in Global Heresy. The following year, she was seen in the film Scorched. Alicia Silverstone was also seen as a matchmaker named Kate Fox in the show Miss Match.

From 2004 to 2008, she appeared in numerous roles. She was seen in movies like Scooby-Doo 2: Monsters Unleashed, Beauty Shop, Silence Becomes You, Stormbreaker, Candles on Bay Street, and Tropic Thunder.

Around this time, she also did roles in television series like Queen B, Pink Collar, The Singles Table, and The Bad Mother’s Handbook. She returned to the world of music videos with her appearance in Her Diamonds by Rob Thomas.

Alicia Silverstone has had a long-time association with theater. She appeared in a theater play titled Time Stands Still from 2009 to 2010.

2011 proved to be an extremely busy year for the actress. She was seen in The Art of Getting By and Butter, two average-rated films at the box-office. She also appeared in a music video titled Fight for Your Right Revisited by the Beastie Boys.

From 2013 to 2014, she appeared in films like Ass Backwards, Angels in Stardust, and Gods Behaving Badly.

Subsequently, she had recurring roles in TV series, such as Making a Scene with James Franco and Jeff & Some Aliens. She was part of the main cast of Paramount Networks’ comedy series American Woman in which she played Bonnie Nolan.

From 2015 to 2019, she was seen in supporting roles in several movies, including King Cobra, Catfight, Who Gets the Dog?, The Killing of a Sacred Deer, Book Club, and The Lodge.

In 2020, she was seen playing Susan Howard in William Teitler's comedy film Bad Therapy. She also became part of the main cast of the comedy-drama web television series The Baby-Sitters Club. 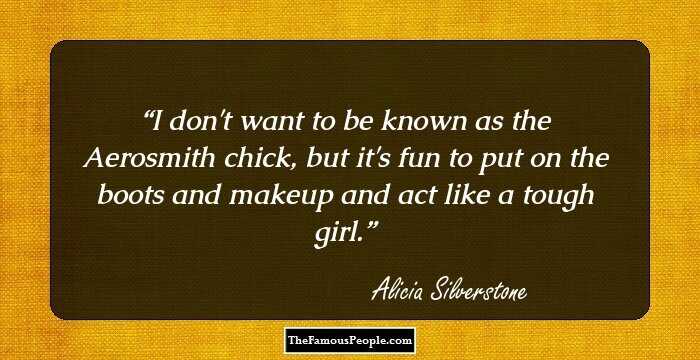 Alicia Silverstone was cast in the box-office hit Clueless, which released in 1995. The movie is roughly based on the novel Emma by Jane Austen. The film became a huge success, earning Silverstone a permanent spot in Hollywood and a multi-million dollar deal. The movie earned over $56 million at the box-office and gathered a huge cult following post its release. The film is ranked 42nd in a list called New Classics by Entertainment Weekly.

In 1994, she won the MTV Movie Award for Best Villain for her role in the movie The Crush.

She won the American Comedy Award for Funniest Actress in a Motion Picture for her role in the hit film Clueless in 1996.

Alicia Silverstone won the Kids’ Choice Award for Favorite Movie Actress for her performance as Batwoman in Batman & Robin in 1998.

She was ranked fifth in VH1’s Hottest Hotties of the ‘90s list.

In 2004, she was named Sexiest Female Vegetarian by PETA. 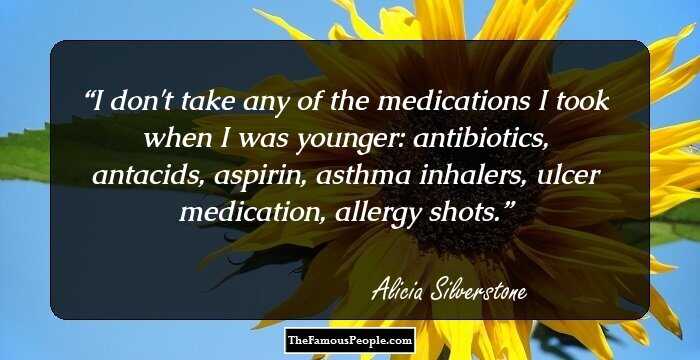 Alicia Silverstone married her boyfriend Christopher Jarecki on June 11, 2005, after eight years of courtship. They used to live in an eco-friendly house in Los Angeles with their son Bear Blu Jarecki, who was born in 2011. They divorced in November 2018.

She is an avid animal rights activist and supports PETA. She is also an environmental activist.

This American actress of Clueless fame currently owns a sanctuary for rescued pets in Los Angeles.

This popular American actress was clutched and smooched by Jim Carrey when she presented the Best Comedic Performance Award to him at the MTV Movie Awards in 1997.

Quotes By Alicia Silverstone | Quote Of The Day | Top 100 Quotes

See the events in life of Alicia Silverstone in Chronological Order