Alexander Mikhailovich Ovechkin is regarded as one of the greatest ice-hockey players in the world. Also known as “The Great Eight” and “Ovi,” he is a Russian professional winger and the captain of the ‘Washington Capitals’ of the ‘National Hockey League’ (NHL). He combines great skill, speed, and physical domination in the game. The talented player has won the ‘Hart Memorial Trophy’ as the ‘Most Valuable Player’ (MVP) in the ‘NHL’ thrice. He is regarded as one of the greatest goal-scorers in ‘NHL’ history. Born and raised in a family of sportspersons in Russia, he displayed affinity toward the game from a tender age. He trained under the development program of ‘HC Dynamo Moscow’ of the ‘Russian Superleague’ (RSL) and began playing professionally at the age of 16. The ‘Washington Capitals’ selected him in the ‘2004 NHL Entry Draft.’ Since then, he has been showcasing his brilliance in the game, both for the ‘NHL’ and for the national team of Russia. He has achieved many milestones, set new records, and earned a number of awards and accolades. He is married to model Anastasia Shubskaya. Russian People
Tall Celebrities
Tall Male Celebrities
Male Sportspersons
Russian Sportspersons
Childhood & Early Life
Alexander Ovechkin was born on September 17, 1985, in Moscow, Russia, into a family of sportspersons. His father, Mikhail Ovechkin, is a former professional soccer player, and his mother, Tatyana, is a well-known Russian basketball player who has won two ‘Olympic’ gold medals as part of the Russian women’s basketball team in 1976 and 1980.
As a child, Ovechkin developed a keen interest in hockey. When Ovechkin was 8 years old, his elder brother, Sergei, encouraged him and helped him with training. Unfortunately, his brother died in a car accident when Ovechkin was 10 years old.
Ovechkin’s was inspired by Mario Lemieux of the ‘Pittsburgh Penguins.’ Later, he was invited to join the development program of the ‘RSL’ team ‘HC Dynamo Moscow.’ At the age of 11, he scored 56 goals, breaking Pavel Bure’s record of 53 goals.
Continue Reading Below
You May Like

The Hottest Male Celebrities With The Best Abs
Career
Ovechkin began his professional career at the age of 16 and played for ‘Dynamo Moscow’ during the 2001–2002 season. By 18, he won the ‘RSL’ award for the best left-wing in the league. In 2003, he was included in the Russian team to play at the ‘World Junior Hockey Championship,’ where his tournament-leading 6 goals helped Russia win the gold. In the 2004–2005 season, he recorded 27 points in 37 games, but he missed two month’s play due to a shoulder injury that occurred during the 2005 ‘World Junior Championship’ against Canada.
He was selected by the ‘Washington Capitals’ first overall in the 2004 ‘NHL Entry Draft.’ Due to the ‘NHL’ lockout, the 2004–2005 season was canceled, and Ovechkin joined the ‘Washington Capitals’ as a rookie for the 2005–2006 season. He was compared with another promising rookie: Sidney Crosby of the ‘Pittsburgh Penguins.’ Ovechkin scored an extraordinary goal in a January game against the ‘Phoenix Coyotes,’ which became a memorable moment in the history of ice hockey. Ovechkin finished the season with 106 points, 52 goals, and 54 assists. He was awarded the ‘Calder Memorial Trophy’ for being the best rookie of the year. He was also first rookie in 15 years to be selected for the ‘NHL First All-Star Team.’
In the 2006–2007 season, he continued to excel, with 46 goals and 92 points. He played for the ‘First All-Star Team.’ However, the ‘Washington Capitals’ could not win for the second year in succession. During the 2007–2008 season, he led the team to a division title, scored 65 goals (and 112 points), which was first time since 1996 that a player had scored more than 60 goals in a season. He won his first ‘Hart Memorial Trophy’ at the end of the season. He was the first player to be awarded four major post-season awards: the ‘Lester B Pearson Award’ for the most outstanding player, the ‘Hart Memorial Trophy’ for the league’s ‘MVP,’ the ‘Art Ross Trophy’ for the league’s leading point-getter, and the ‘Maurice “Rocket” Richard Trophy’ for the league’s leading goal-scorer.
The same season, his earlier three-year contract was extended to a 13-year $124 million contract, which is the richest in the league’s history. When he won the ‘Hart Trophy,’ Ovechkin was given the key to Washington by Mayor Adrian Fenty.
In the 2008–2009 season, the ‘Washington Capitals’ again won the division crown, and Ovechkin scored 56 goals in the season to win his second ‘Hart Trophy’ and ‘Pearson Award.’ In February 2009, he became the fourth player to score his 200th goal in just four seasons.
In January 2010, he was named the captain of the ‘Washington Capitals.’ In February the same year, he reached his 500-point milestone in ‘NHL,’ becoming the fifth player to achieve the feat in five seasons. In 2010, he won the ‘Pearson Award,’ now known as the ‘Ted Lindsay Award,’ for the third consecutive year. The same year, he was named to the ‘First All-Star Team,’ making it his fifth inclusion in the team.
The next two seasons were not as high-scoring for him as the previous seasons. In 2013, he earned the ‘Hart Trophy’ again and led the ‘NHL’ in goals. He won the ‘Richard Trophy’ in 2008, 2009, 2013, 2014, 2015, 2016, and 2018, scoring 50 or more goals in five of those seasons. He became the third player to have seven 50-goal seasons.
Ovechkin led the league in goals for four consecutive seasons, from 2012 to 2016. During the 2015–2016 season, he scored his career’s 500th goal.
In 2002, Ovechkin represented Russia at the ‘IIHF World U18 Championship’ and, with 14 goals, led Russia to win the silver medal. In 2004, he represented Russia at the ‘World Championship’ and the ‘World Cup.’ In 2005, his team won the silver medal at the ‘World Junior Ice-Hockey Championship.’ He was part of the Russian team at the ‘Winter Olympics’ in the years 2006, 2010, and 2014. He played for Russia in 11 ‘World Championships’ and won it thrice.
The 2016–2017 season saw him at his lowest, with him scoring just 69 points and 33 goals. In the 2017–2018 season, he led the ‘NHL’ in goals, scoring 49 goals. The ‘Washington Capitals’ won their first conference title in 20 years, and Ovechkin got a chance to play in the ‘Stanley Cup’ finals. In the same season, he broke many ‘NHL’ and ‘Washington Capitals’ records. He scored his 600th goal in March 2018 and became fourth player to achieve the feat in less than a thousand games. In April 2018, he became the first ‘Washington Capitals’ player to reach the thousand-game mark. He played his thousandth game against the ‘Pittsburgh Penguins.’
Awards & Achievements
Some of his most prominent awards are the ‘Calder Memorial Trophy’ for the best rookie of the year (2006), and the ‘Hart Memorial Trophy’ as the ‘MVP’ (2008, 2009, and 2013).
He won the ‘Maurice “Rocket” Richard Trophy’ seven times. The trophy is awarded for scoring the highest number of goals.
Ovechkin received the ‘Lester B Pearson Award’, also known as the ‘Ted Lindsay Award,’ awarded to the most outstanding player, for three consecutive years: 2008, 2009, and 2010.
He won the ‘Art Ross Trophy’ for being the ‘Scoring Leader’ in 2008. He received the ‘Prince of Wales Trophy’ in 2018 and the ‘Kharlamov Trophy’ seven times.
‘Asteroid 257261 Ovechkin’ was named after him, in honor of his contribution to sports. He was honored with a sightseeing bus in Washington DC, by ‘Ride of Fame.’
Personal Life
In December 2012, he got engaged to tennis player Maria Kirilenko. However, the engagement was called off in July 2014. Later, in 2015, he announced his engagement with model Anastasia Shubskaya, daughter of actor Vera Glagoleva. They got married in July 2017.

See the events in life of Alexander Ovechkin in Chronological Order 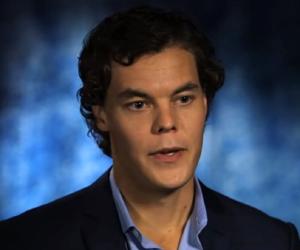