(One of the Greatest Ice Hockey Players of All Time)

Robert Gordon “Bobby” Orr is a former professional ice hockey player regarded as one of the greatest ever players of the game. He played as a defenceman and used his ice skating speed and play-making abilities to develop his own unique technique of playing in that position. Even though his career spanned not more than 13 years, he was able to revolutionize the way ice hockey was played and created several world records within this relatively short period to become one of the best ever hockey players of all time. Having been born into a family of sportsmen, it was no surprise that young Bobby had a keen interest in sports from an early age. He started playing organized hockey by the time he was five. Even though he was small and skinny, he was very talented and hard working. As a small child he played in the forward position before being moved to defence by his coach. He began his professional career with the Boston Bruins with whom he played for ten seasons before moving on to play for Chicago Black Hawks. He is the only defenceman to have scored most points and assists in a single season. Post his playing career he spends his time scouting for new talent and mentoring young players. He is also known for his philanthropy and charitable works. Connor McDavid
20th March In History
DID WE MISS SOMEONE?
CLICK HERE AND TELL US
WE'LL MAKE SURE
THEY'RE HERE A.S.A.P
Quick Facts

Canadian People
Canadian Men
Tall Celebrities
Tall Male Celebrities
Male Sportspersons
Childhood & Early Life
He was born as one of the five children of Doug Orr and his wife Arva Steele. His grandfather was a soccer player while his father was a one-time aspiring hockey player who dropped his sporting dreams to join the Royal Canadian Navy to serve during the World War II.
He started playing hockey in 1953 when he was just five years old. He played as a forward until he was 10 when his coach moved him to defence. He played in several youth hockey tournaments as a youngster. 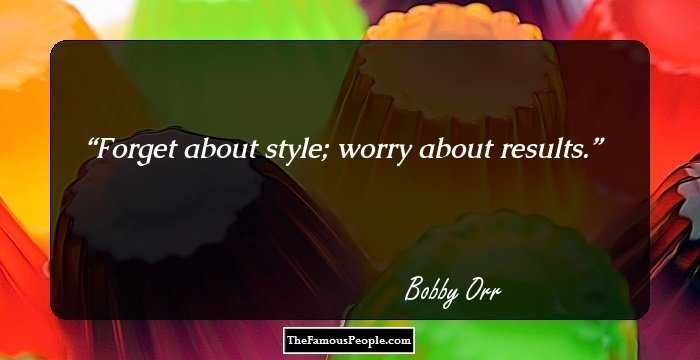 Continue Reading Below
Career
He caught the attention of the Boston Bruins in 1961 while he was playing in a youth hockey tournament. Other teams like Toronto Maple Leafs and Detroit Red Wings were also interested in signing him. But he chose to sign with the Bruins in 1962.
He made his debut as a junior in the 1962-63 season in the new Metro Junior A League. Orr was only 14 yet he was competing against much older players in the age group 18-20.
His performance improved during the next two seasons and he had a great time during the 1965-66 season during which he scored 38 goals and finished with 94 points.
He started playing for the Bruins as a professional during the 1966-67 season. He made his debut against the Detroit Red Wings getting one assist.
During that season he managed to score 13 goals and 28 assists which was a unprecedented achievement by a defenceman till then. He was named the league’s outstanding rookie and was presented the Calder Memorial Trophy.
He could, however, play only 46 games during the 1967-68 season as he suffered from injuries ranging from a collar bone fracture to a shoulder separation. Despite the injuries he was named to the NHL's First All-Star team.
He had an awesome season during 1968-69 even though he was in constant pain as his injuries had not healed completely. However, he played outstandingly and scored his first hat trick against Chicago with two assists for a five-point night.
His scoring total doubled during the 1969-70 season. He led the Bruins through the 1970 playoffs and scored a historic goal that gave Boston its first Stanley Cup since 1941.
He led the Bruins to the Stanley Cup in the 1972 playoffs again and scored the championship winning goal against New York. He won the MVP award at the 1972 NHL All-Star game.
Continue Reading Below
In 1973, he made the record for the most points in a game by a defenceman scoring 3 goals and 4 assists against the New York Rangers. The very next season he broke his own record for goals by a defenceman and scored 46 goals with 89 assists.
His final season with the Bruins was 1975-76. His contract ended that season.
He signed with the Chicago Black Hawks in June 1976. However, he could play only 26 games for them as he was constantly plagued by injuries. He retired in 1978. 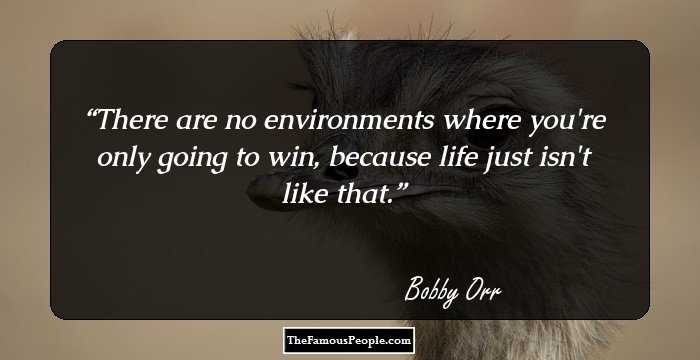 Quotes: You, Life, Like
Awards & Achievements
Renowned as the greatest ever hockey players, Bobby Orr amassed 270 goals and 645 assists in 657 games. He was the first defenceman to score nine hat tricks and also the first one to score 40 goals in a single season.
In 1970, he was presented with the Lou Marsh Trophy that is given to honour Canada’s top athletes.
He is a two-time winner of the Art Ross Trophy (1969-70 and 1974-75).
Personal Life & Legacy
He married Margaret Louise Wood, a speech therapist, in 1973. They have two sons. Bobby Orr became a grandfather in 2009.
He is well known for his charitable work, especially for his contributions to the Multiple Sclerosis Society. He is a shy person who prefers to keep the information of his charitable works away from the media. 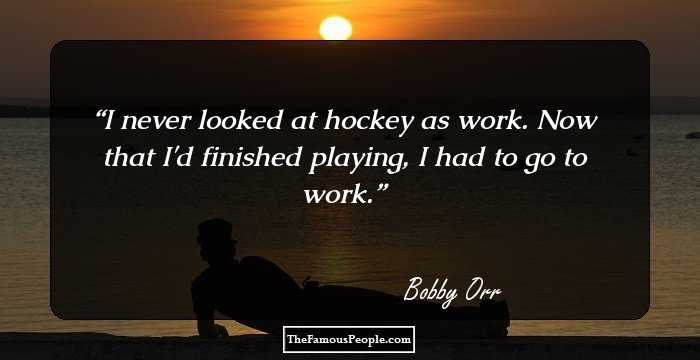 Quotes: Never, I
Trivia
At 31, this great ice hockey player was the youngest to be inducted into the Hockey Hall of Fame.

See the events in life of Bobby Orr in Chronological Order