Alex Drummond is the daughter of award-winning blogger and celebrity chef Ree Drummond. Ree hosts a cooking show The Pioneer Woman on the Food Network. Alex’s father, Ladd Drummond, is one of the owners of the Drummond Land and Cattle Company. Alex is the eldest of the four children of her parents. She graduated from Texas A&M university and is currently working as an associate consultant for a Texas-based management agency. She has appeared in several episodes of the show The Pioneer Woman which is hosted by her mother. Alex is now dating one of her college fellows named Maurico Scott. 552
DID WE MISS SOMEONE?
CLICK HERE AND TELL US
WE'LL MAKE SURE
THEY'RE HERE A.S.A.P
Quick Facts 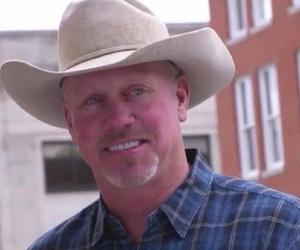 Alex Drummond’s parents’ love story is no less than a romantic movie. Her mother, Ree Drummond, met Ladd Drummond for the first time at ‘J-Bar’, a local pub where she had gone to enjoy Christmas-break drinks with friends. Interestingly, Ree was initially not interested in going to the bar and had gone there half-heartedly. She saw the fourth-generation cattle rancher at the bar and liked him instantly. However, Ree was disappointed to not hear from Ladd for the next few months. She had moved on and had been focusing on her brother’s wedding, when the cowboy called after about 4 months.

Soon after, Ree and Ladd began dating and decide to get married. On September 21, 1996, the two walked the aisle. They had their honeymoon in Australia. Ree conceived Alex amidst their 3-week honeymoon. Ree still managed to keep the spark of her new marriage alive by managing her self-care regime. She would get her toes pedicured and would always be well-groomed. Even on the day of her delivery, Ree had showered and had curled her hair. Following her regime, they had finally left the ranch and had driven to the hospital to welcome their first bundle of joy.

Interestingly, Ree’s attempts “to remain the ever-fresh and vibrant new wife” did not stop even when she was in labor. She made sure her lip color was not faded and continued reapplying tinted lip balm. Ree refrained from pushing out the baby too hard, as she was scared of farting in front of her husband who was in the labor room. Ree thought Ladd would divorce her if she farted. The young Ree was then advised by her obstetrician to focus on pushing the baby out.

Alex’s mother refers to Ladd as “the Marlboro Man" in her books and blogs.
You May Like

The Most Popular US Veterans
Continue Reading Below
Birth
Alex Drummond was born on June 25, 1997. She has a younger sister named Paige. and two younger brothers: Bryce and Todd.

Shortly after Alex’s parents got married, they struggled with their finances. At the same time, Ladd’s business suffered and the couple worked hard to make ends meet. Despite these struggles, the Drummond couple never compromised on their children’s education. They homeschooled their sons to make them learn about their family business. The Drummond daughters, however, went to university.

Alex studied�at Texas A&M University. In September 2018, she participated in the university’s special event, the 'Aggie Ring Day' ritual. Both Alex and her mother posted the moment on their Instagram accounts. Alex posted a picture of her on Instagram, showing the symbolic “Aggie Ring”.

Currently, she is working as an associate consultant for a Texas-based management agency.�

Being the daughter of a popular TV host and chef, Alex has been an integral part of her mother’s show, The Pioneer Woman. Hosted by Ree, the culinary show is aired on Food Network. Alex has appeared in a total of 78 episodes of the show, from 2011 to 2016. One of the episodes, Alex’s Care Pack, was dedicated to Alex’s favorite dishes. Her mother prepared a care package for Alex, consisting of brownie cookies, homemade cheddar crackers, spicy party mix, and crazy chocolate bark. Alex helped her mother in baking the cookies. In 2011, Alex was featured in an episode of Paula's Best Dishes, another cookery show on Food Network.

In July 2018, lifestyle and home magazine Country Living reported that Alex was in a relationship with her collegemate Mauricio Scott. The news was based on the numerous pictures with the collegemate that Alex had posted on her Instagram profile.

In January 2019, Alex and Mauricio, along with a few of their friends, went on a cruise trip. Speaking about her daughter's relationship status, Ree once commented in the past that she would not call Mauricio “Alex’s boyfriend”. She posted an Instagram picture of Alex and Mauricio with a caption that also explained why she could not call him her daughter’s boyfriend. Ree explained that the very thought of her daughter’s relationship status made her feel that Alex was all grown up.