Advanced Search
Albert Jacka was an Australian military man hailed for his gallantry during the Gallipoli Campaign in World War I. For his bravery, he was awarded the Victoria Cross (VC), the highest decoration for gallantry that can be awarded to members of the British and Commonwealth armed forces. Jacka was the first Australian to be decorated with the VC during the World War I. He continued displaying exemplary bravery throughout the war and received further decorations. Born on a dairy farm as the son of a hard working farmer, he grew up to be an industrious young man who took up a job with the Victorian State Forests Department. When the World War I broke out, he enlisted in the Australian Imperial Force and embarked on a rigorous training before being posted to fight in the Gallipoli Campaign. Already having gained the reputation of being a fearsome front-line soldier, he displayed great courage during a concerted Turkish effort to push the Australians into the sea. Following this incident he became a national hero and was awarded the Victoria Cross. After the war ended he became a businessman. However he never recovered from his war-time injuries and died at the relatively young age of 39. Doris Miller
DID WE MISS SOMEONE?
CLICK HERE AND TELL US
WE'LL MAKE SURE
THEY'RE HERE A.S.A.P
Quick Facts 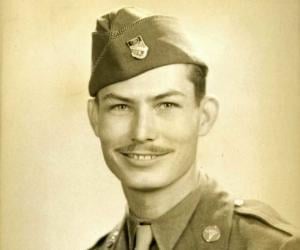 Australian Celebrities
Australian Soldiers
Capricorn Men
Childhood & Early Life
Albert Jacka was born near Winchelsea, Victoria on a dairy farm on 10 January 1893. He was the fourth of seven children born to Nathaniel Jacka and his English-born wife Elizabeth (ńee Kettle).
He attended a local school for a few years and thereafter he started working. Initially he worked with his father as a haulage contractor and later accepted a job with the Victorian State Forests Department.
Continue Reading Below
Career
The World War I broke out in 1914. Jacka immediately enlisted in the Australian Imperial Force. Assigned the rank of a private, he was sent for training at Broadmeadows Camp.
Meanwhile Turkey became a German ally and Jacka’s battalion was sent to Alexandria. The battalion received ten weeks of rigorous training in Cairo and was merged with New Zealand brigades to form the New Zealand and Australian Division (NZ&A) under Major General Alexander Godley. A brave man, Jacka quickly earned a reputation as a fearsome front-line soldier.
His division landed at Anzac Cove, Gallipoli Peninsula, in April 1915 for what became known as the Gallipoli Campaign. On 19 May 1915, the Turks launched a counter-attack along a major stretch of the Anzac line. A frenzied fighting broke out following which some of the Turks captured a twelve-yard (11 m) section of the trench.
Jacka was guarding one of the ends of the trench, and he promptly devised a plan to remove the Turks. Two bombs were lobbed at the Turks, and Jacka attacked them from the rear. He shot five Turks and bayoneted two others. The remaining Turks fled away in terror. His action in the campaign made him a national hero and he was bestowed with honors and awards.
Albert Jacka received rapid promotions following this event. He was made a corporal, then a sergeant, and then company sergeant major in quick successions. As a company sergeant major of C Company, he oversaw much action at Gallipoli where his battalion took part in an Allied offensive. After nine months of fighting which resulted in the deaths of several thousands of Australians, Jacka's battalion was withdrawn to Egypt.
In April 1916, Jacka was commissioned as a second lieutenant after he passed through officer training school with high marks. He was promoted to lieutenant in August the same year and, finally, to captain in March 1917.
The Germans had retired to the Hindenburg Line by early 1917. In April that year Jacka led a dangerous night reconnaissance party into "no man's land", near Bullecourt to inspect enemy defenses. In the process, he single-handedly captured two Germans and was much praised for his valor.
Over the course of his military career Jacka had been injured many times. In May 1918 he was badly gassed and wounded by a missile. He recuperated for a long period in England and finally returned to Australia. He was discharged from the AIF in January 1920.
He then became a businessman and was elected to the Council of the City of St Kilda in 1929. The next year, he was made the mayor.
Major Works
Albert Jacka became a national hero because of the valor and courage he displayed during the Gallipoli Campaign in the World War I. After the Turks launched an assault against the Anzac Line and captured a section of the trench at Courtney's Post, Jacka fought bravely and shot five Turkish soldiers and bayoneted two others to defend the trench.
Awards & Achievements
Albert Jacka was decorated with the Victoria Cross, the highest military decoration awarded for valor to members of the armed forces of various Commonwealth countries.
He was awarded the Military Cross for his actions in the attack of Pozières. He was later awarded a Bar to his Military Cross for his actions against the Germans at the Hindenburg Line.
Personal Life & Legacy
Jacka married Frances Veronica Carey in 1921. The couple later adopted a daughter.
He had suffered many injuries during his military career and never fully recovered from them. His health began deteriorating when he was just in his thirties and he died from chronic nephritis on 17 January 1932. He was just 39.

See the events in life of Albert Jacka in Chronological Order