Albert Finney was an Oscar-nominated English actor who established himself as a Shakespearean actor in the late 1950s. He was known for playing versatile roles which are critically acclaimed as well as commercially successful. He impressed everyone with his talent to step into a role and wear a character's persona no matter the age, nationality, or profession like a Polish pope, a Belgian detective, an Irish gangster, a British miser, a gruff American lawyer, a Scottish King, a German religious reformer, and an Roman warrior. He won many Oscar nominations for his roles. He left his mark not only in acting but also in production and direction of films / series. British Celebrities
Theater Personalities
British Men
Royal Academy Of Dramatic Art
Taurus Actors
Childhood & Early Life
Albert Finney was born on 9 May 1936, in Salford, Manchester, England in a working-class household to Alice (née Hobson) and Albert Finney, Sr.
He received his education at Tootal Drive Primary School and Salford Grammar School. He graduated from the Royal Academy of Dramatic Arts in 1955 and went on to become a member of the Royal Shakespeare Company.
He began his career in the theatre; he made his first appearance on the London stage in 1958 in Jane Arden's ‘The Party’. Then in 1959 he appeared at Stratford in ‘Coriolanus’.
It was his work in the 1960 film ‘The Entertainer’ that launched his career on the big screen.
In 1960, Finney starred in the gritty and breakthrough film ‘Saturday Night and Sunday Morning’ where he portrayed a disillusioned factory worker. 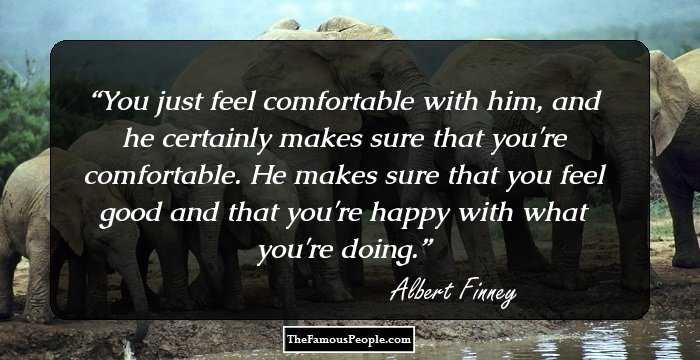 Famous Beautiful Women With Green Eyes
Career
In 1963, Albert Finney earned his first Academy Award nomination for his role in the very successful film ‘Tom Jones’. Before this movie, he appeared in kitchen sink drama series ‘Angry Young Man’.
Throughout the 1960s, Finney played a variety of roles, ranging from a psychopath in the 1964 thriller ‘Night Must Fall’ to Audrey Hepburn's love interest in 1967's ‘Two for the Road’.
Even with his success on the big screen, Finney never abandoned his stage performances. He continued his association with the National Theatre Company at the Old Vic in London, where he performed in the mid-1960s in Shakespeare's ‘Much Ado About Nothing’ and Chekov's ‘The Cherry Orchard’.
After the 1968 ‘Charlie Bubbles’, which was directed by him, his film appearances became less frequent as he focused more on acting on stage.
One of his high-profile film roles was as Agatha Christie's Belgian master detective Hercule Poirot in the 1974 film ‘Murder On The Orient Express’.
While known for his dramatic roles, Finney appeared and sang in two musical films: ‘Scrooge’ and the Hollywood film version of ‘Annie’. He also appeared in ‘Under The Volcano’ two years later.
He received Tony Award nominations for ‘Luther’ (1964) and ‘A Day in the Death of Joe Egg’ (1968), and also starred onstage in ‘Love for Love’, Strindberg's ‘Miss Julie’, ‘Black Comedy’, ‘The Country Wife’, ‘Alpha Beta’, Beckett's Krapp's ‘Last Tape’, ‘Tamburlaine the Great’, ‘Another Time’ and, his last stage appearance in 1997, 'Art'.
Audiences got to see a new side of the actor in 1970, when he played the title role in the musical version of ‘A Christmas Carol’. In his mid-30s at the time, Finney required layers of makeup to play a convincing Ebenezer Scrooge. His musical numbers didn't require any stagecraft, though. In fact, his musical performances earned him praise as a "nimble song-and-dance man" by ‘New York’ magazine.
His 1983 movie, ‘The Dresser’ earned an Oscar nomination for him.
Continue Reading Below
Finney made several television productions for the BBC in the 1990s, including ‘The Green Man’ (1990), ‘A Rather English Marriage’ (1998), and the lead role in two plays, ‘Karaoke’ and ‘Cold Lazarus’ in 1996 and 1997.
In 2002 his critically acclaimed portrayal of Winston Churchill in ‘The Gathering Storm’ won him BAFTA and Emmy awards as Best Actor.
He also played the title role in the television series ‘My Uncle Silas’, based on the short stories by H. E. Bates, about a roguish but lovable poacher-cum-farm laborer looking after his great-nephew. The show ran for two series from 2000 until 2003.
A lifelong supporter of ‘Manchester United, Finney narrated the documentary ‘Munich’, about the air crash that killed most of the players of the club in 1958, which was shown on United's TV channel MUTV in February 2008.
Finney also made an appearance at Roger Waters' ‘The Wall Concert in Berlin’, where he played "The Judge" during the performance of "The Trial".
He also tasted success with starring roles in ‘Erin Brokovich’ (2000), ‘Big Fish’ (2003), ‘The Bourne Ultimatum’ (2007) and ‘Skyfall’ (2012). 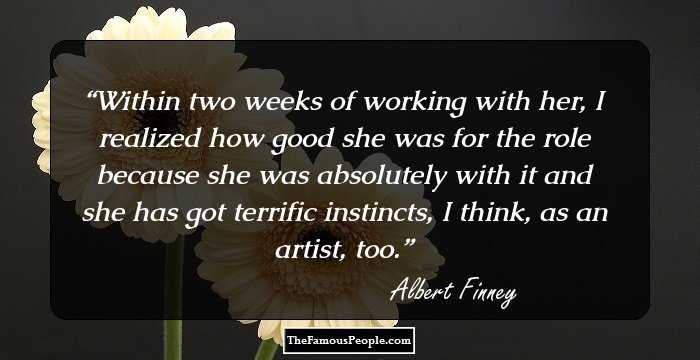 Quotes: Think
Major Works
Albert Finney tasted success early in his career through ‘Tom Jones’ in 1963. It was a British adventure comedy film, an adaptation of Henry Fielding's classic novel The History of Tom Jones, a Foundling. It was one of the most critically acclaimed and popular comedies of its time, winning four Academy Awards, including Best Picture. The film is notable for its unusual comic style. The film was highly successful financially, becoming the third most popular at the British box office in 1963, and the 4th most popular in the United States.
One of the most stunning performances by Finney was in a British mystery movie ‘Murder on the Orient Express’. Finney played the role of a Belgian detective Hercule Poirot. This film was based on 1934 novel ‘Murder on the Orient Express’ by Agatha Christie. The film revolves around murder of American business tycoon, Mr. Ratchett on The Orient Express. The film was a success at the box office. It won many Academy Awards and BFATA nominations including Finney’s nomination for ‘Best Actor’. He also won an Oscar nomination for this role.
Continue Reading Below
In 2002, he appeared in ‘The gathering Storm’. In this movie Finney played the lead role of Churchill. This film was critically acclaimed. He received many accolades for his performance, winning both a ‘BAFTA’ and ‘Emmy Award’ for his acting. Director and writer of the film were also awarded.
Awards & Achievements
In 1960, he won BFATA award for his role in ‘Saturday Night and Sunday Morning’ in ‘Most Promising Newcomer’ category. In the same category he won the ‘Golden Globe award’ for his role in ‘Tom Jones’ in 1963.
His role in ‘Scrooge’ brought him ‘Golden Globe award’ in ‘Best Actor in a Motion Picture – Musical or Comedy’ category.
He won the ‘Olivier Award’, as ‘Best Actor’, for ‘Orphans’ in 1986.
The year 2002 was a special one for Finney as he won BFATA and Golden Globe award for ‘Best Actor’ for ‘The Gathering Strom’.
For the same role of Winston Churchill, in 2002, he won an ‘Emmy Award’, in ‘Outstanding Lead Actor in a Miniseries or Made for TV Movie’ category. 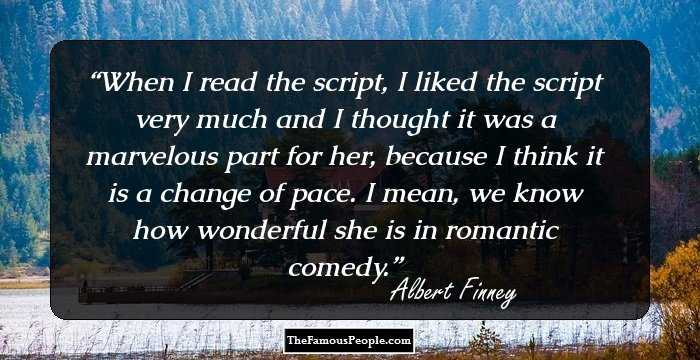 Quotes: Think, Change
Personal Life & Legacy
Albert Finney married actresses Jane Wenham in 1957. He had a son, Simon, from his first marriage. After the divorce in 1961, he remarried actress Anouk Aimée in 1970. However, this marriage also resulted in a divorce in 1978.
In 2006, he married Penelope Delmage.
From 2007 to 2012, Finney's presence on the big screen was limited due to battling prostate cancer.
He passed away on 8 February 2019, age the age of 82, after a short illness.
Trivia
Impressed by Finney's talent, director David Lean arranged for him to have an elaborate screen test for the film ‘Lawrence of Arabia’. Finney disliked the terms of the contract and famously turned down the role. The role was instead played by Peter O'Toole, one of Finney's former classmates at the Royal Academy of Dramatic Arts. This role became a milestone in O’Toole’s career.
Finney was nominated for Oscar four more times, but he never attended a ceremony in Los Angeles. Finney also never won an Oscar, though.
He seemed to perennially resist celebrity status. He turned down an offer of knighthood twice.

Quotes By Albert Finney | Quote Of The Day | Top 100 Quotes

See the events in life of Albert Finney in Chronological Order