Advanced Search
Alan Shepard was the first American to travel into space. He became the second human to travel into space, after the Soviet cosmonaut Yuri Gagarin. He started his career in the navy, on the destroyer ‘USS Cogswell,’ which was on active service in the Pacific Ocean. After his flying training, he joined the ‘Fighter Squadron 42’ (VF-42) to fly the ‘Vought F4U Corsair.’ He attended the ‘United States Naval Test Pilot School’ and subsequently conducted high-altitude flying tests. Shepard was one of the seven test pilots selected to be part of ‘NASA’s space initiative and became a national hero after his maiden flight into space. He commanded the first manned ‘Gemini’ mission that was the next level of the US space program after the ‘Mercury’ series. Shepard was the commander of the ‘Apollo 14’ mission that made America’s third successful landing on the Moon. This made him the fifth and the oldest person to walk on the surface of the Moon, at the age of 47. He was promoted to the rank of rear admiral in the ‘US Navy’ before he retired and spent the rest of his life close to his family. He died of leukemia in 1998. American Celebrities
Business People
American Men
Male Astronauts
American Aviators
Childhood & Early Life
He was born Alan Bartlett Shepard Jr., on November 18, 1923, in Derry, New Hampshire, US. His father, Alan B Shepard Sr., worked at the ‘Derry National Bank’ and was part of the ‘National Guard.’ He was with the ‘American Expeditionary Force’ in France during World War II. His mother, Pauline Renza Shepard, was a homemaker. He had a sister named Pauline, who was also known as Polly.
Shepard was a brilliant student in school. He skipped the sixth grade while studying in ‘Adams School’ and then skipped the eighth grade in ‘Oak Street School.’ He went on to complete his schooling privately from the ‘Pinkerton Academy’ in Derry.
While in school, he was fascinated by planes and created model planes. He often cycled to ‘Manchester Airfield’ to do odd jobs in exchange for occasional rides and informal flying lessons.
He passed the entrance exam of the ‘United States Naval Academy’ in 1940 but was underage. He spent a year at the ‘Admiral Farragut Academy’ before finally joining the ‘Naval Academy’ in 1941. There, he won several prizes for swimming and sailing. He graduated as an ensign in June 1944 and received a BS degree from the ‘United States Naval Academy.’ 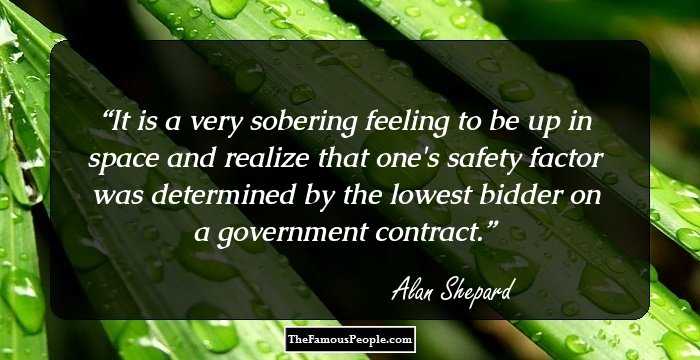 Continue Reading Below
Career
Shepard started his naval service in August 1944, on the destroyer ‘USS Cogswell,’ which was on active service in the Pacific Ocean. He was assigned the task of a gunnery officer and was responsible for operating the ship’s 20 mm and 40 mm guns against Japanese “kamikazes.” This was to give him an exposure to the ship before he started flying.
He started his flight training at the ‘Naval Air Station Corpus Christi’ in Texas in January 1946 and later went for advanced training at the ‘Naval Air Station Pensacola’ in Florida. He finally earned his naval aviator wings after six perfect landings on ‘USS Saipan’ in 1947.
He joined the ‘Fighter Squadron 42’ (VF-42) to fly the ‘Vought F4U Corsair’ on his first assignment from the ‘Naval Air Station Norfolk’ in Virginia and embarked on his first cruise, in the Caribbean region, on ‘Franklin D Roosevelt’ in 1948.
In 1950, he attended the ‘United States Naval Test Pilot School’ and subsequently conducted high-altitude tests to obtain information for in-flight refueling. His next assignment was with the ‘VF–193’ night-fighter squadron that was deployed for the Korean War.
After the war, he joined the ‘Naval War College’ at Newport, Rhode Island, from where he graduated in 1957 and joined the staff of the commander–in–chief of the ‘Atlantic Fleet.’
Shepard was one of the seven test pilots selected to be part of ‘NASA’s space initiative in 1959. After vigorous training and body conditioning, he was chosen to be the first American astronaut to be launched into space as part of the ‘MR-3’ mission in May 1961. He became the second human to travel into space, after Soviet cosmonaut Yuri Gagarin, who had orbited the Earth in April that year.
He became a national hero after the event and was awarded the ‘NASA Distinguished Service Medal’ by President John F Kennedy. He became a capsule communicator for the ‘Mercury–Atlas 6’ in February 1962 and was scheduled to pilot the ‘Mercury–Atlas 10’ the following year. However, the mission was canceled, and he was designated as the commander of the first manned ‘Gemini’ mission that was the next level of the US space program, which involved launching a crew of two into space.
Following a spate of adverse health issues, Shepard had to be taken off flying duties and was appointed as the “Chief of the Astronaut Office,” the most senior leadership position for active ‘NASA’ astronauts, in November 1963. He was thus responsible for training astronauts and planning missions.
After being operated upon and being declared fit to fly, Shepard was nominated as the commander of the ‘Apollo 14’ mission that made America’s third successful landing on the Moon in February 1971. This made him the fifth and the oldest person to walk on the surface of the Moon, at the age of 47.
Continue Reading Below
In recognition of his contribution to the US space mission, he was appointed as a delegate to the ‘26th United Nations General Assembly’ and was promoted to the rank of rear admiral in the ‘US Navy’ before he retired in 1971.
Major Works
In 1994, he published a book titled ‘Moon Shot: The Inside Story of America’s Race to the Moon,’ which was made into a TV miniseries.
Awards & Achievements
Alan Shepard was the recipient of several awards, including the ‘Congressional Space Medal of Honor,’ the ‘Golden Plate Award’ for ‘Science and Exploration,’ the ‘Langley Gold Medal,’ and the ‘John J Montgomery Award.’
He was inducted into the ‘National Aviation Hall of Fame’ in 1977, the ‘International Space Hall of Fame’ in 1981, and the ‘US Astronaut Hall of Fame’ in 1990.
Personal Life & Legacy
He secretly got engaged to Louise Brewer in 1944, while still in the ‘Naval Academy.’ They decided to get married a year later but could not spend much time together due to his active service with the ‘US Navy.’ However, he made sure to keep in touch with her throughout the war. After the war, they had two children named Laura and Julie.
Louise’s sister, who died in 1956, left behind a daughter named Judith Williams, whom they raised and renamed Alice. Although Shepard was rumored to have had many affairs, his wife did not confront him and the couple lived a normal life. They later had six grandchildren.
In late 1963, he was diagnosed with Ménière’s disease, an ailment that caused bouts of extreme dizziness and nausea, due to which he had to be put off flying. He also had to be operated for thyroid, which was a setback to his active career as an astronaut.
In 1969, he was operated for his condition successfully at the ‘St. Vincent’s Hospital’ in Los Angeles, after which he was declared fit for flying.
After his retirement, he made a fortune in banking and was part of the board of directors of several institutions, till he died of leukemia in July 1998.
Trivia
During the latter part of his career, he invested in banks, real estate, and oil exploration. He became a co-owner of the ‘Baytown National Bank’ and bought a partnership in a ranch in Texas.

See the events in life of Alan Shepard in Chronological Order