Advanced Search
Aileen Carol Wuornos was a serial killer who had killed seven men. She is widely believed to be the United States’ first female serial killer. She was convicted for six of the murders and sentenced to death. She was executed by lethal injection at the ‘Florida State Prison’ (FSP) on October 9, 2002. The product of a highly dysfunctional marriage, Aileen was subjected to horrific tortures as a young girl. Her father was a pedophile who was in jail at the time of her birth, while her mother was an immature teenager who abandoned Aileen and her brother. Brought up by her grandparents, Aileen became a victim of rampant childhood sexual abuse at the hands of her grandfather. Exposed to sexual activities at a tender age, she began providing sexual favors in exchange for food, drugs, and cigarettes when she was just 11 years old. She was raped and became pregnant when she was just 14—she claimed that her brother was the father of her child. Thrown out of her grandparents’ home as a teenager, she began eking out a living as a prostitute. She later started robbing and killing men, earning the notoriety of being the first female American serial killer. Wayne Williams
DID WE MISS SOMEONE?
CLICK HERE AND TELL US
WE'LL MAKE SURE
THEY'RE HERE A.S.A.P
Quick Facts

American Celebrities
Pisces Criminals
Female Criminals
American Criminals
Pisces Serial Killers
Childhood & Early Life
Aileen was born Aileen Carol Pittman on February 29, 1956, in Troy, Michigan, USA, to Leo Dale and Diane Wuornos. Her father was a psychopath and child molester, and was incarcerated at the time of her birth; he eventually committed suicide. Her mother abandoned Aileen and her brother who were then adopted by her maternal grandparents.
Her grandfather was a pedophile and sexually abused the girl from a young age. She also developed sexual relations with her brother.
She began engaging in sexual activities in school in exchange for drugs and food when she was just 11 years old. She became pregnant when she was 14, and was moved to a home for unwed mothers; her baby was given up for adoption.
When her grandmother died, she was thrown out of the home by her grandfather. She then started working as a prostitute to earn a living. 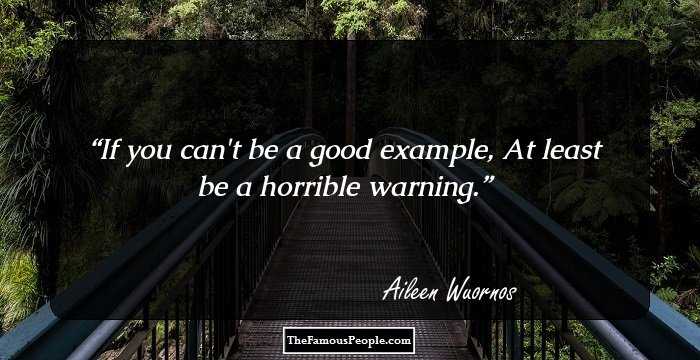 Quotes: You
Continue Reading Below
Offences & Incarcerations
She adopted a life of crime from an early age. In 1974, she was arrested for driving under the influence, disorderly conduct, and firing a .22-caliber pistol from a moving vehicle. She failed to appear before the court when summoned.
She was involved in an armed robbery of a convenience store in 1981. She was sentenced to prison on May 1982, and got released on June 1983. Over the next couple of years, she was arrested again on charges of attempting to pass forged checks. She was also a suspect in the theft case of a missing revolver.
Her criminal activities grew manifold in 1986. That year, she was charged with car theft, providing false identification, resisting arrest, and threatening a male companion with a gun. The police found a .22 pistol and spare ammunition hidden in her car.
On December 1989, the body of her first known victim, Richard Mallory, was found. She claimed that he tried to rape her and that she killed him in self-defense. Interestingly, the man did have a criminal record for rape.
After a period of six months, the body of her second victim was found. On June 1990, the naked body of David Spears was found with multiple bullet wounds. He had been shot with a .22 pistol.
Another body was discovered within days of finding Spears’ body. The third body was severely decomposed and could not be identified immediately. But it bore certain resemblances to the previous two discoveries. Hence, the police associated the murder with the same killer. It was later ascertained that the body belonged to a rodeo worker named Charles Carskaddon.
A vehicle belonging to a missing merchant seaman named Peter Siems was found crashed on July 1990. Eye witnesses reported that two women were seen in the vehicle. According to their description, the police suspected one of the women to be Aileen Wuornos.
The body of a delivery driver named Eugene Burress was found on August 1990. He had been shot twice with a .22-calibre pistol.
On September 1990, the body of a former police chief named Dick Humphreys was found bearing six bullet wounds from a .22 pistol. This body was found in Marion County.
The killer’s final victim was found on November 1990. Walter Antonio, a truck driver, had been killed less than 24 hours before his body was found. Like other bodies, this body too was naked and had been shot four times with a .22 firearm.
The police soon found enough evidence to suspect Wuornos for the killings. She was found guilty of murdering six of the men; the body of Peter Siems was never found. She was penalized with six death sentences.
Initially, she maintained that all the victims had violently raped her when she was working as a prostitute. Later on, she changed her statements and gave inconsistent accounts of the killings.
Major Crimes
After killing seven men sequentially, Aileen Wuornos earned the ignominious credit of being the first female serial killer from the United States. Her troubled childhood and the events that led to the killings often generated sympathy among public.
Personal Life & Legacy
She met the 69-year-old yacht club president Lewis Gratz Fell in 1976. Lewis Gratz Fell married Aileen Wuornos the same year. However, due to her anti-social behavior, Fell divorced her a few weeks after the wedding.
She started a relationship with Tyria Moore in 1986. The couple had a four-year-long relationship which ended in 1990.
She was penalized with six death sentences for the murders that she had committed. On 9 October 2002, she was executed by the state of Florida by lethal injection.
Trivia
Actor Charlize Theron won the ‘Academy Award’ for ‘Best Actress’ for portraying this notorious serial killer in the movie ‘Monster.’

See the events in life of Aileen Wuornos in Chronological Order