Ahmad Suradji was an Indonesian cattle breeder turned serial killer. He murdered more than forty women in the late 1980s and the early 1990s. Also known as Nasib Kelewang or Datuk, he practiced black magic and was a sorcerer as well. He used to strangle his victims with a cable and bury them up to their waists in the ground as a part of a ritual he practiced. All of his victims were girls and women ranging in age from 17 to 40. He continued his killing spree for 11 years before he was eventually arrested in 1997, after bodies were discovered near his home on the outskirts of Medan. He was then sentenced to death by firing squad and executed in 2008. His three wives were also found guilty and one of them was sentenced to death, though her punishment was later changed to life imprisonment. He had committed the murders as a part of a black magic ritual which he believed would increase his magical powers. He said that his deceased father had appeared in a dream and advised him to drink the saliva of 70 dead young women in order to become a mystic healer.
Continue Reading Below Indonesian Celebrities
Capricorn Criminals
Male Serial Killers
Indonesian Criminals
Capricorn Serial Killers
Crimes
Ahmad Suradji’s murderous spree started after he supposedly saw his deceased father in a dream. According to him, his father told him to perform a black magic ritual that would increase his magical powers. Little is known about his initial victims as he was finally arrested only after the body of his final victim was found.
His last victim was a 21-year-old lady named Sri Kemala Dewi, who had visited him in a rickshaw. She had advised the rickshaw puller to keep her visit a secret. She also never requested to be picked up. A few days later, her naked and decomposing body was found in a sugarcane field by a man, who dug it up with a group of people. The police was informed and soon they learned that she had last visited Suradji. Suradji, however, denied any connection to the killing.
During their investigation, the police found Dewi’s handbag, dress, and bracelet in Suradji’s home which eventually led to his arrest. He confessed to his crimes during the interrogation. He said that he had killed up to 42 young women in the same way. Further excavation was carried out in the sugarcane field where the bodies were buried. Some of them were so badly decomposed that they could not even be identified.
During his interrogation, Suradji told the police that he saw his deceased father in a dream back in 1986. His father’s ghost told him to drink the saliva of 70 dead young women. This would help him become a mystic healer. Since it would take him a long time to find 70 dead women, he began to kill women himself so that he could drink their saliva.
Since he was known as a sorcerer, many women came to him in order to receive spiritual advice. He would then take them to the sugarcane field and bury them up to their waists. Following this, he would kill them by strangulation and drink the saliva that dribbled out of their mouths. He then buried the bodies in a ritualistic fashion in a sugarcane plantation near his house. He also added that he didn’t blame his father for the murders as he hadn’t specifically told him to kill anyone. Ahmad Suradji received the death sentence for his crimes. He was finally executed on 10 July 2008.
You May Like

Capricorn Men
Continue Reading Below
Personal Life
Ahmad Suradji was born on 10th January 1949 in Medan, Indonesia. He had three wives, who were also arrested for helping him with the killings. One of them received the death sentence as well, though later it was changed to life imprisonment.
You May Like 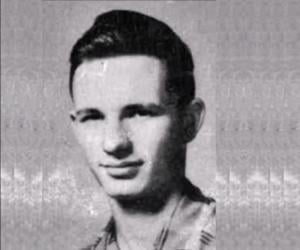