Adam Thomas is a British actor, known for playing Donte Charles and Adam Barton in ‘Waterloo Road’ and ‘Emmerdale’ respectively. Thomas started his career by playing a minor role in a medical soap opera titled ‘Doctors’ before landing his landmark role in the popular drama series, ‘Waterloo Road.’ Adam Thomas became a household name after appearing as a contestant in the famous British reality television game show, ‘I’m a Celebrity... Get Me Out of Here.’ Apart from participating in the survival game show, he also won the third place, which further increased his popularity. Thomas is also a social media personality, with thousands of followers across various social media platforms. He currently lives in Leeds, England, along with his wife and children. 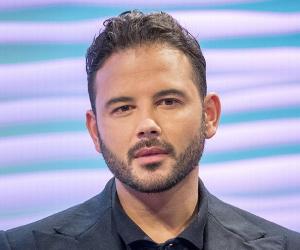 Charlie Heaton
Actors #2791
Film & Theater Personalities #6155
DID WE MISS SOMEONE?
CLICK HERE AND TELL US
WE'LL MAKE SURE
THEY'RE HERE A.S.A.P
Quick Facts

British People
Leo Actors
British Actors
Actors Who Are In Their 30s
British Film & Theater Personalities
Early Life & Career
Adam Gordon Thomas was born on August 11, 1988, in Salford, England. He was raised along with his two siblings – non-identical twin brother, Scott Thomas, and older brother, Ryan Thomas. After graduating high school, Adam went to the prestigious ‘Mid Cheshire College’ in Northwich, England.
Adam Thomas began his acting career in 2002, when he was offered a guest role in BBC’s medical soap opera ‘Doctors.’ In 2004, he was once again seen in a minor role in BBC network’s medical drama series ‘Casualty.’
Adam received his breakthrough role in the year 2006, when he was presented with an opportunity to play Donte Charles in a television drama series titled ‘Waterloo Road.’ He went on to appear in a total of 47 episodes of ‘Waterloo Road’ starting from 2006 to 2009. After being inducted into the cast of the TV show for its maiden season, Adam Thomas went on to reprise his role as Donte Charles in three more seasons.
Meanwhile, in 2007, Thomas made a guest appearance playing the role of Rohan Jameson in ‘Doctors.’ The following year, he made another guest appearance in ‘Casualty,’ when he played Jake Shepherd. By now, Adam Thomas had become a known entity, thanks to his impressive performance in ‘Waterloo Road.’
Thomas got his second major acting role in 2009, when he was roped into play Adam Barton in one of the most popular British soap operas of all time, ‘Emmerdale.’ Thomas has so far portrayed Adam Barton in more than 800 episodes.
In 2009, Adam Thomas was also seen in the stand-up comedy television series ‘Michael McIntyre’s Comedy Roadshow.’ In the show, he was seen as one of the audience members. In the same year, he also made a guest appearance in one of the episodes of ‘Doctors.’ This time around, he was seen portraying a character named Ben Hamilton in the episode that was aired on May 26, 2009.
With his growing popularity, he began to be featured as a guest artist in various series and gameshows, including the popular ITV show ‘All Star Family Fortunes’ in 2014. In the show, Adam appeared with his brother, Ryan Thomas.
In 2016, he appeared as himself in a couple of shows, such as ‘Lorraine’ and ‘Good Morning Britain’ before landing an opportunity to be a part of the famous British reality television game show, ‘I’m a Celebrity... Get Me Out of Here.’ After appearing in the reality show as one of the contestants, Adam Thomas’ popularity increased further as he now became a household name in the UK. He appeared in a total of 22 episodes in the 16th season of the show. Not only did he compete in the show, but he also managed to secure the third place, thanks to his grit and determination.
In 2016, he was also seen in a couple of other television series, such as ‘Gogglebox’ and ‘All Star Mr & Mrs.’ While he was seen in ‘All Star Mr & Mrs’ along with his then girlfriend and now wife, Caroline Daly, he appeared in ‘Gogglebox’ as one of the contestants of ‘I’m a Celebrity... Get Me Out of Here.’
You May Like

Who Is The Most Popular BTS Member?
Personal Life
Adam Thomas’ two brothers are also actors. His older brother, Ryan Thomas, is a popular actor, best known for his performance in ITV’s soap opera ‘Coronation Street.’ His non-identical twin brother, Scott Thomas, has appeared in the dating reality television show ‘Love Island.’ Adam is close to both his siblings and loves spending time with them.
Adam Thomas started dating Caroline Daly in April 2008, post which the couple fell heads over heels in love with each other. After dating Caroline Daly for eight years, he finally proposed to her on a beach in Dubai, and the couple got engaged in April 2016.
On September 8, 2014, Adam welcomed his son, Teddy James Thomas, with his long-time girlfriend Caroline Daly. On August 27, 2017, Adam Thomas and Caroline Daly tied the knot in Delamere Manor, Cheshire. Later that year, Adam announced that his wife was pregnant with their second child. Their second child, Elsie-Rose, was born on May 20, 2018.
Adam Thomas is active on various social media platforms, including Instagram and Twitter. His official Instagram page, which has more than 719,000 followers, is packed with pictures and videos of his family members and friends. Most of his pictures posted on Instagram feature his children and wife. His Twitter account has more than 341,000 followers.
Adam Thomas likes hanging around with his friends and colleagues. He is a good friend of his ‘Emmerdale’ co-star Isabel Hodgins. In one of his Instagram posts, Adam had thanked Isabel for her help and support on the sets of ‘Emmerdale.’

See the events in life of Adam Thomas in Chronological Order