The 20th century witnessed the birth of rock music, and dozens of instrumentalists such as guitarists and drummers. Ace Frehley is one among many such musicians who has managed to remain in the hearts of rock music lovers. Other than just his musical skills, Frehley was also known for being a style icon. He and his other band members would paint their faces before appearing on stage, a trend that was unusual in the field of music back then. Frehley did not have any formal training in playing the guitar, which turned out to be a blessing in disguise. His unorthodox style of playing the instrument earned him many fans. Frehley claims that he was influenced by musical legends such as Jimi Hendrix, The Rolling Stones, and Led Zeppelin. Frehley even proved his prowess as a lyricist to music lovers and critics, through few hit tracks from his band’s albums, which have even secured top spots in the ‘Billboard 200’ Countdown. The glorious life of Ace Frehley has been put on paper by the latter through his autobiography ‘No Regrets’. Even after a career spanning 4 decades, Frehley continues to mesmerize lovers of rock music through his work. The best example being his latest album ‘Space Invader’
Continue Reading Below American People
Hard Rock Musicians
Heavy Metal Musicians
American Men
New Yorkers Musicians
Childhood & Early Life
Ace Frehley was born on April 27, 1951 as the youngest of the three kids to his parents Carl Daniel and Esther Anna Frehley. While his father was of Dutch origin, mother Esther was a German raised in the United States. Ace, born in Bronx county of New York City, was originally named Paul Daniel Frehley.
He attended ‘Theodore Roosevelt High School’, ‘DeWitt Clinton High School’, and finally graduated from ‘Grace Lutheran’. He was thirteen years old at the time.
Though Frehley was least interested in studying further, he pursued a diploma as per his family’s advice. Post the completion of the course, Frehley got engaged in petty jobs such as mail delivery boy and furniture delivery boy.
Frehley’s first tryst with music was in 1964, when he received an electric guitar as a Christmas present. He rigorously practiced playing the instrument, and eventually mastered the art of playing the guitar without the guidance of any music teacher. 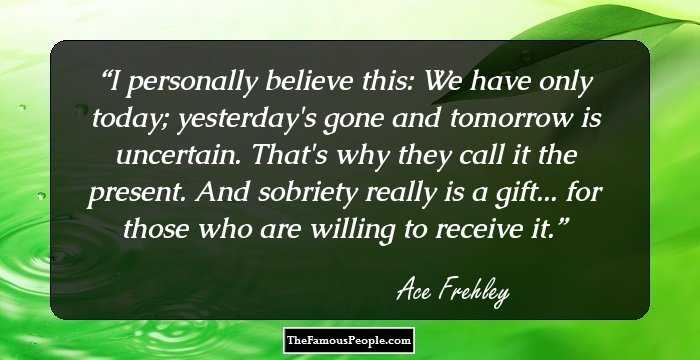 Quotes: Believe, I
Continue Reading Below
You May Like

Who Is The Most Popular BTS Member?
Career
After a series of unsuccessful collaborations with few bands, the turning point of Ace Frehley’s career came towards the end of 1972. During this time, Frehley’s friend had spotted an advertisement of a music audition in a newspaper named ‘Village Voice’. As per the friend’s suggestion, Frehley attended the audition, and performed before the members of the band ‘Wicked Lester’.
The band members were impressed by Frehley’s performance and decided to appoint him as the lead guitarist of their troupe. This troupe was later re-christened ‘KISS’. Other than contributing through music, Frehley also designed the logo of this new formed band.
During the initial days of the band, Frehley took up a job to support his living expenses. However, the group found a manager in mid-1973. The manager paid each member a weekly wage of $75, and soon Frehley hung his boots from the routine job to pursue music fulltime.
In 1974, the band KISS released their first album with the same name. Frehley not only played the guitar, but also co-wrote two songs namely ‘Love theme from KISS’ and ‘Cold Gin’. The song ‘Cold Gin’ from the album garnered critical acclaim.
Frehley continued contributing to the band through his guitar skills and the lyrics until 1977. He made his debut as a vocalist this year through the song ‘Shock Me’ of the album ‘Love Gun’.
Frehley’s success continued with the albums titled ‘Dynasty’ and ‘Unmasked’, for which he had penned quite a few songs. However, things fell apart for Frehley after bandmate Peter Criss quit the band. The other members didn’t pay any heed to Frehley’s words, and even went on a tour named ‘Creatures of The Night’ in 1982 without him.
In 1984, Frehley formed his own band along with Anton Fig and John Reagan, who played the drums and the bass guitar respectively. After a series of shows, the band was finally backed by a record label by name ‘Megaforce Records’.
This record label launched the new formed group’s album ‘Frehley’s Comet’ three years later, in 1987. The debut album secured a 43rd spot on the ‘Billboard 200’ countdown and sold over 5 hundred thousand copies.
In 1988, the band released two other albums namely ‘Second Sighting’ and ‘EP Live+1’, both these albums were highly acclaimed and secured good positions in the billboard countdown.
Continue Reading Below
After a split which lasted more than a decade, Frehley and the other members of the band ‘Kiss’ re-united in the year 1996. Two years later, the band released an album by name ‘Psycho Circus’. Over 110000 copies of the album were sold during the first week of its release.
Frehley released an album in 2009 titled ‘Anomaly’. This album debuted at the 27th position on ‘The Billboard 200’ countdown. Five years later, his other album ‘Space Invader’ was also released. 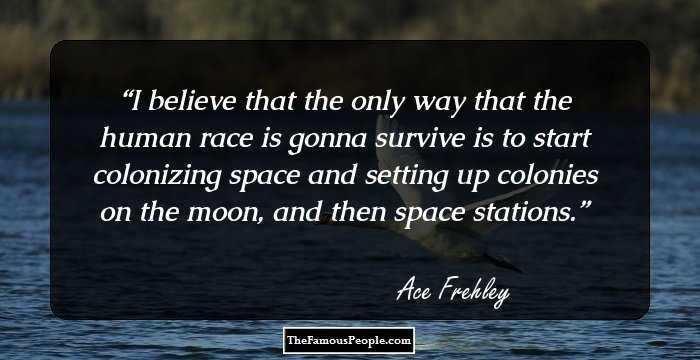 Quotes: Believe, I
Major Works
The year 2011 saw the release of Frehley’s autobiography titled ‘No Regrets: A Rock n Roll Memoir’. The book widely spoke about his musical journey, and also contained few pictures from his life. ‘No Regrets’ reached the #1 and #10 spots on the ‘amazon.com’ and ‘New York Times’ lists.
Awards & Achievements
During the period 1979 to 1989, tracks from five of Frehley’s albums, namely ‘Ace Frehley’, ‘Frehley’s Comet’, ‘Second Sighting’, ‘Live+1’, ‘Trouble Walkin’ managed to reach good positions in the ‘Billboard 200’ Countdown.
Even in the 2000s, his albums ‘Anomaly’ and ‘Space Invader’ occupied top spots in the ‘Billboard 200’ countdown. 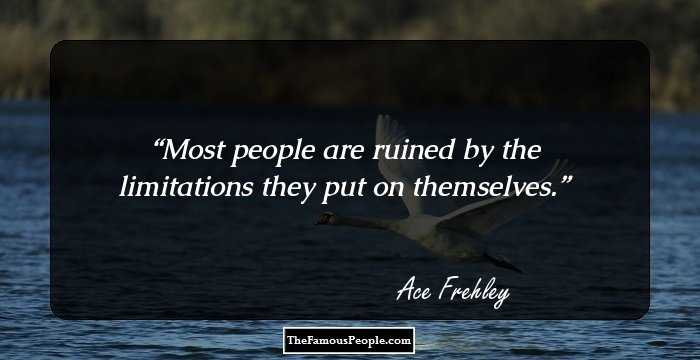 Personal Life & Legacy
Frehley has 2 siblings named Nancy and Charles. Both of them played piano and the acoustic guitar during their younger days, around the same time when Frehley got his hands on the first musical instrument.
Trivia
Frehley apparently got his famous first name ‘Ace’ from his schoolmates, who felt that he had the ability to get his friends dates.
Frehley was also involved with few street gangs during his childhood days. After becoming a well-known musician, Frehley confessed that it was music which saved his life and made him a better person.
Recommended Lists:
Heavy Metal Musicians #29
Musicians #853
You May Like

See the events in life of Ace Frehley in Chronological Order