A. J. Liebling was a prominent American journalist known for his long-term association with ‘The New Yorker’. Counted amongst the most creative journalists of his age, he is remembered for his many quotes and aphorisms, such as "Freedom of the press is guaranteed only to those who own one"; "People everywhere confuse what they read in newspapers with news"; and "I can write better than anybody who can write faster, and I can write faster than anybody who can write better." Born into a well-to-do family in New York City, he developed an early interest in writing. Rebellious and independent-minded, he dropped out of Dartmouth College and then enrolled in the School of Journalism at Columbia University. Following his graduation he embarked on a career as a journalist in the sports department of the ‘New York Times’, from where he was supposedly fired. At the insistence of his father he then studied French medieval literature at the Sorbonne in Paris for a year before resuming his journalistic career. He worked as a war correspondent during the World War II, filing many stories from Africa, England, and France. He returned to his regular work after the war and also wrote extensively on topics like food, drinks, and sports. Jamie Lee Curtis
Writers #4994
Media Personalities #3390
Continue Reading Below
DID WE MISS SOMEONE?
CLICK HERE AND TELL US
WE'LL MAKE SURE
THEY'RE HERE A.S.A.P
Quick Facts

Quotes By A. J. Liebling Writers

American Celebrities
American Men
Columbia University
Libra Writers
Male Writers
Childhood & Early Life
Abbott Joseph "A. J." Liebling was born on October 18, 1904, in New York City into a well-to-do family. His father, a Jewish immigrant from Austria was penniless when he arrived at the U.S. He established himself as a prosperous furrier and married a girl hailing from a Jewish family in San Francisco.
After completing his primary education, Joe—as A. J. Liebling preferred to be called—got enrolled at the Dartmouth College in the fall of 1920. There he wrote regularly for the ‘Jack-O-Lantern’, Dartmouth's nationally known humor magazine. However, he left Dartmouth without graduating. He then began studying at the School of Journalism at Columbia University. 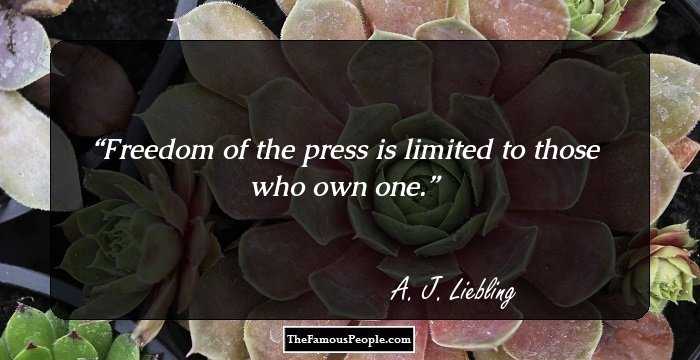 The Hottest Male Celebrities With The Best Abs
Career
A. J. Liebling began his career as a journalist at the ‘Evening Bulletin’ of Providence, Rhode Island. He also worked in the sports department of the ‘New York Times’, although for a brief time; he was supposedly fired from this job.
Liebling's father wanted him to study in Paris for a year. Thus Liebling suspended his career as a journalist in 1926 and sailed to Europe to study French medieval literature at the Sorbonne in Paris. Once there, he developed a great interest in the French lifestyle, especially the food and drinks.
He returned to the U.S. in 1927 and began writing for the ‘Journal’. Then he moved to New York and attempted to get a job on Joseph Pulitzer's ‘New York World’. He wrote for the ‘World’ in 1930–31 and the ‘World-Telegram’ from 1931–35. During this period he also got married though the union was not a happy one.
A. J .Liebling joined Harold Ross’s ‘The New Yorker’ in 1935 and would be associated with the newspaper till his death several years later. After the outbreak of the World War II, he was sent to Paris as a war correspondent. He also travelled to Africa and England over the course of the war, covering many stories. His war time articles were collected in ‘The Road Back to Paris’ (1944).
After the war he returned to regular journalism. For several years, he wrote a monthly feature called ‘Wayward Press’ for ‘The New Yorker’ in which he analyzed the U.S. press. A big fan of sports like boxing, he was also an avid foodie with a love for horse racing. These were some of the topics he frequently wrote about.
In addition to his journalistic career, he also authored several books including ‘Back Where I Came From’ (1938), ‘The Telephone Booth Indian’ (1942), ‘The Wayward Pressman’ (1947), ‘Chicago, The Second City’ (1952), ‘Between Meals: An Appetite for Paris’ (1959), and ‘The Earl of Louisiana’ (1961). 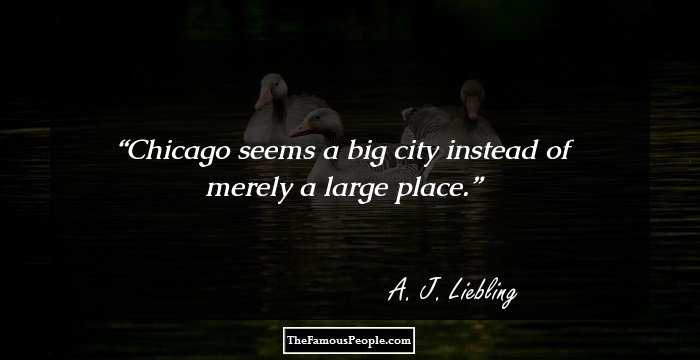 Major Works
A journalist of international renown, Liebling’s work as a war correspondent during the World War II was much acclaimed. He covered the early battles in Paris in 1940, and flew to Britain in 1941 to cover the happenings there. Then he went to Algeria in 1942 to cover the fighting on the Tunisian front.
Awards & Achievements
A. J. Liebling was awarded the Cross of the Légion d'honneur by the French government for his war reporting during the World War II.
Continue Reading Below 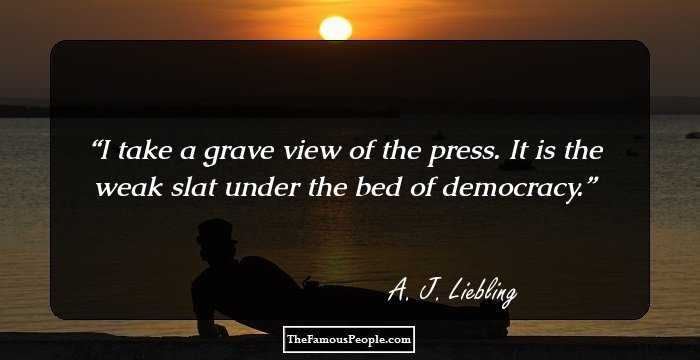 Quotes: I
Personal Life & Legacy
In 1934, he married Ann Beatrice McGinn, a former movie theater ticket taker. His wife, who had grown up in an orphanage suffered from either manic depression or schizophrenia, which caused her to have hallucinations and go into fugue states. Both of them committed infidelities during the marriage which ultimately ended in divorce.
His second marriage was to Lucille Spectorsky, the ex-wife of Auguste Comte Spectorsky, in 1949. This marriage too was unhappy and ended in divorce.
He tied the knot for the third time with author Jean Stafford.
He suffered from several health problems due to his excessive love of food. He became ill with bronchopneumonia and died on December 28, 1963, aged 59.
In 1995, A.J. Liebling Award was created by the Boxing Writers Association of America. The first class of honorees included long-time Washington, D.C. sportswriters Sam Lacy and Shirley Povich.
In 2002, “The Sweet Science”, a compliation of Lieblings essays on boxing was selected as the number one sports book of all time by Sports Illustrated.
A volume of Liebling’s essay on World War II was published by the Library of America. The book contained essays such as “The Road Back to Paris”, “Mollie and Other War Pieces”, “Normandy Revisited”, as well as his uncollected war journalism.
Liebling was tagged as the best essayist by journalist and sportswriter William “Bill” Heinz
Since Liebling christened Chicago as the “Second City”, the nickname has remained with the Chicago.
In 2008, Liebling’s story, “The Case of the Scattered Dutchman”, was selected by the Library of America to be included in its two-century retrospective of American True Crime writing.
You May Like

See the events in life of A. J. Liebling in Chronological Order