Zachary Gordon is a gifted American actor and voice-over artist who has made his mark in the film industry for portraying the character of Greg Heffley in the movie series ‘Diary of a Wimpy Kid’. His professional acting career took off after he successfully auditioned for a television series ‘How I Met Your Mother’, in 2006, at the age of eight. He went on to feature in numerous other television shows and programs, most notable amongst them being ‘Because I Said So’ and ‘All of Us’. He has won plaudits, nominations, and awards including the ‘Young Artist Award’ and ‘Sierra Award’ for his roles in films like ‘Georgia Rule’, ‘Diary of a Wimpy Kid’ and ‘Rodrick Rules’. He has shared screen time with many celebrated and veteran Hollywood actors including the likes of Jane Fonda, Jennifer Lopez, and Nicholas Cage. Zachary has also earned fame and recognition as a voice actor and has lent his voice to several characters in a number of animation films. He was the host for a Nintendo mini-series titled ‘Skylander’s Boomcast’ in 2013. Though, he is still young to the entertainment industry, Zachary Gordon has already carved a niche for himself.
Continue Reading Below American People
American Men
California Actors
Aquarius Actors
American Actors
Career
Zachary Gordon debuted on the small screen in 2006, at the age of eight, in the TV ‘How I Met Your Mother’, a TV series where he played the role of Stacy’s son. He was again featured in an episode of ‘How I Met Your Mother’ in 2009 and enacted the character of Tyler Stinson. He featured in two episodes of sitcom ‘All of Us’ where he played the role of Richie and portrayed the character of Arthur in the movie ‘Because I Said So’ in 2006-2007.
In 2007, he played the role of Little David in the TV show ‘David’s Solution’. He played the character of Little Robin Hood in the debut episode of ‘Desperate Housewives’ which was aired in 2008. Between 2007 and 2008, he was part of a number of films, such as ‘Sex and Death 101’, ‘Lower Learning’ and ‘National Treasure: Book of Secrets’; he acted alongside Nicolas Cage in ‘National Treasure: Book of Secrets’. He appeared as 8 year-old boy in two episodes of the TV series '24', in 2009.
Zachary Gordon was nominated for the ‘Young Artist Award’ in 2008 for portraying the character of Ethan in the movie ‘Georgia Rule’, which he eventually won. However, Zachary cemented his reputation as a budding actor when he was selected to play Greg Heffley—the protagonist—in the film series ‘Diary of a Wimpy Kid’ whose first part was released in 2010. He reprised the role in two successive sequels—‘Diary of a Wimpy Kid: Rodrick Rules’ and ‘Diary of a Wimpy Kid: Dog Days’—which were released in 2011 and 2012, respectively. He was nominated for the ‘Young Artist Award’ in 2011 and 2013 for his roles in ‘Diary of a Wimpy Kid’ and ‘Diary of a Wimpy Kid: Dog Days’ that he ultimately won.
Besides acting, Zachary has also contributed as a voice actor for numerous cinematic characters. Some of the prominent characters to whom he has lent his voice include: Ricky Garcia (Project Gilroy), Brad Spolyt (The Chubbchubbs Save Xmas), and San San (Ni Hao, Kai-Lan).
He has also done cameo roles as a voice-over artist, the most notable amongst these being Baby Melman for the animation movie ‘Madagascar; Escape 2 Africa’, and Young Tony Stark for ‘The Super Hero Squad Show’. He routinely voice-overs for Gil who is one of the central characters in ‘Bubble Guppies’ a Nickelodeon series. In 2011, he did voice-over for the characters of Franklin, Linus, and Charlie Brown that featured in the comedy program ‘Robot Chicken and in 2013, he emceed the Nintendo miniseries titled ‘Skylander’s Boomcast’ on YouTube.
You May Like

Actors Who Are In Their 20s
American Film & Theater Personalities
Aquarius Men
Continue Reading Below
Personal Life
Zachary Gordon was born on February 15, 1998, in Oak Park, California to Kenneth Gordon and Linda Gordon. Gordon, who spent his growing up years in Southern California, has two brothers, Kyle and Joshua Gordon. Zachary did his schooling from a public high school in Oak Park. Zach is a Jew by religion and is very guarded about his affairs or relationship status but is remarkably active on social media platforms. 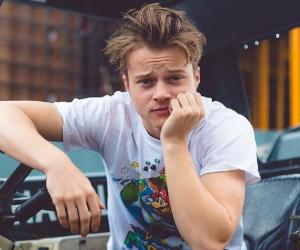