Advanced Search
William Wilberforce was a British politician and philanthropist who dedicated his life to the abolitionist movement. A deeply religious man, he played an influential role in abandoning slavery and slave trade from the British society. Wilberforce commenced his political career as an independent Member of the Parliament. It was while pursuing his political ambitions that Wilberforce experienced a spiritual reformation that turned him from a staunch Christian to an Evangelist. In 1787, Wilberforce first came into contact with anti-slave trade activist. Initially sceptical of his abilities, he soon took on the campaign and introduced the abolition of slave trade in the House of Commons. And rest as they say is history. Despite repeated failures, he made constant attempts arguing against the injustice meted out to slaves and raising awareness about their pitiable conditions. It was due to his resilient approach that in the Abolition of Slave Trade Act 1807 was finally passed. All through his life, Wilberforce contributed significantly in reshaping the political and social scenario by promoting social responsibility and action. Till the end, he fought for slave right and merely three days before his death, witnessed the passing of the Abolition of Slavery Bill in the House of Commons. A month after his death, the Bill was passed in the House of Lords and became Abolition of Slavery Act British People
Philanthropists
Social Reformers
Political Leaders
British Men
Childhood & Early Life
William Wilberforce was born on August 24, 1759 as the only son of Robert Wilberforce and Elizabeth Bird. His father was a wealthy merchant. As a child, Wilberforce was mostly unwell and had poor eyesight.
He gained his early education from Hull Grammar School. Upon his father’s death in 1768, Wilberforce was put under the guardianship of his uncle and aunt under whose influence he leaned towards evangelicalism.
Returning to Hull in 1771, he resumed his studies. The religious fervour subsided as he engaged himself in social outings and led a hedonistic lifestyle. For higher studies he enrolled at St John’s College, Cambridge.
In 1781, he was awarded a B.A. degree and in 1788, he bagged his M.A. degree. 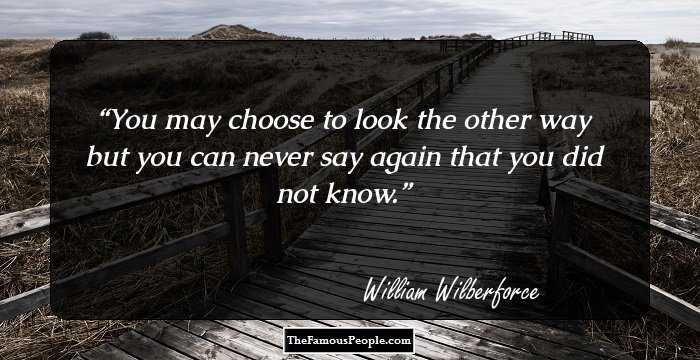 Quotes: You, Never
Continue Reading Below
Career
It was while at college that Wilberforce considered a career in politics. In 1780, he was elected as the Member of Parliament for Kingston upon Hull.
As an MP, he served as a ‘no party man’. Wilberforce supported both the Tory and Whig government, mostly working in favour of the party in power. Due to the same, he was criticized by fellow politicians for his inconsistency.
Blessed with excellent oratory skills, he gained a reputation for himself as an influential speaker with a sharp sense of wit. He became a renowned name in the political circle, due to his eloquence and fluency.
During the 1784 general election, Wilberforce stood as the candidate for the county of Yorkshire. On April 6, 1784 he returned to the House of Commons as the MP for Yorkshire.
In 1785, Wilberforce underwent a spiritual conversion of sorts. He turned to evangelicalism and promised to dedicate his life to the service of God. Unlike other evangelists, he resolved to remain active socially and politically but with increased diligence and conscientiousness. He professed education and social reform.
The period of 1780s marked the rise of the antislavery committee. Rev James Ramsay, a surgeon and clergyman, through his essay gave detailed, first-hand information regarding the life of slaves and the ill treatment meted to them. Wilberforce, in 1786, became interested in this humanitarian cause.
Before introducing the subject of abolition of slave trade in Parliament, he equipped himself with wide information regarding the subject. It was during this time that he befriended a Cambridge alumnus, Thomas Clarkson, a friendship that was to last for nearly half a century.
Clarkson had a major influence on Wilberforce. He provided the latter with first-hand evidence on slave trade in England. Wilberforce was appalled by the working and living condition of slaves. On March 1787, he agreed to bring forward the abolition of slave trade in the parliament.
His involvement in the abolition movement satiated both his spiritual and social calling. It gave him the ground to serve God in public life and put an end to the unchristian trade that was being practiced. He soon involved himself in two primary tasks: suppression of slave trade and reformation of moral values.
Continue Reading Below
On May 12, 1789, Wilberforce made his first speech on the subject of abolition in the House of Commons. He zealously argued the state of slaves and the appalling condition in which they were brought from Africa. In his speech, he made 12 resolutions that condemned slave trade but not slavery. His speech was rejected by the opposition who fiercely spoke against the motion.
In 1791, Wilberforce successfully introduced the first parliamentary Bill to abolish slave trade. However, it lost by 163 to 88 votes in the wake of French Revolution. The Bill marked the beginning of a long-drawn campaign that stood strong, braving the test of time.
Along with Henry Thornton, he formed the group, ‘The Saints’. The group was committed to oppose slavery and slave trade. They opposed pro-slavery advocates and claimed that freed slaves and Africans were capable of sustaining a well-ordered society.
In 1792, he became involved in the establishment of the first free colony of the blacks from United Kingdom, Nova Scotia and Jamaica, supporting them financially. Same year, he yet again introduced an Abolition Bill.
With the outbreak of war with France, abolition of slave trade became a secondary subject as parliament concentrated on national crisis situation. Despite lack of interest, Wilberforce continued to introduce abolition bills right through the 1790s.
The beginning of the 19th century marked a renewed interest in abolition. In June 1804, Wilberforce yet again introduced a Bill in the House of Common that was successfully passed. However, it failed through the House of Lords.
In 1807, Lord Grenville, Prime Minister, introduced Wilberforce’s Abolition Bill in the House of Lords. When the bill was passed by a large margin, it was taken through the House of Commons where the Bill was passed with 283 votes against 16. Finally on March 25, 1807, the Abolition of the Slave Trade Act received Royal Assent.
Wilberforce was an ardent supporter of education and believed that education was vital in alleviating poverty from the society. He worked with the reformer, Hannah More to provide children with regular education in reading, personal hygiene and religion.
He was closely involved with the Royal Society for the Prevention of Cruelty to Animals. He encouraged Christian missionaries to go to India. By 1812, his health deteriorated. He gave up his Yorkshire seat and instead became an MP for rotten borough of Bramber.
Continue Reading Below
Though the Abolition of the Slave Trade Act was passed, it only put an end to slave trade. Wilberforce then committed himself to put an end to slavery as such. He joined the Society for the Mitigation and Gradual Abolition of Slavery and despite ill health, campaigned vigorously.
In 1824, he finally resigned from his parliamentary seat due to serious illness. Retired from political life, he continued to fight for the abandonment of slavery. It was after much debate that the Abolition of Slavery Bill was passed in the House of Commons on July 26, 1833.
After Wilberforce’s death in 1833, the Bill was passed in the House of Lords, thus forming the Slavery Abolition Act that came into full effect from August 1834. 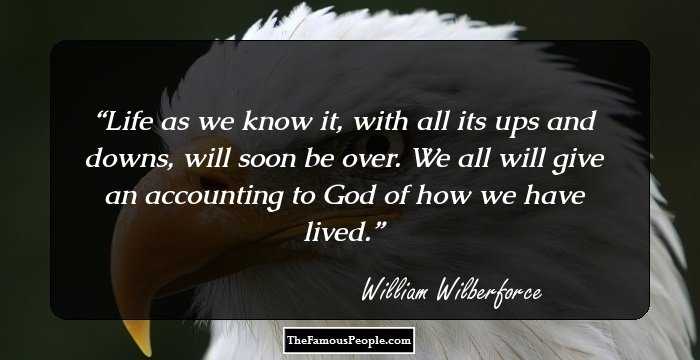 Quotes: Life, God, Will
Major Works
Wilberforce magnum opus of his life came as the leader of the abolitionist movement who aimed at putting an end to slave trade in Britain. A humanitarian reformer, he spent the better part of his life working for the cause of abolition of slavery and slave trade. After decades of campaigning, Wilberforce found success in 1807 when Abolition of the Slave Trade Act was given a Royal Assent. His next success came just three days before his death when Abolition of the Slavery Bill was passed in the House of Commons.
Personal Life & Legacy
William Wilberforce married Barbara Ann Spooner, an evangelical Christian on May 30, 1797. Throughout, their marriage, the couple remained loyal and supportive of each other. They were blessed with six children.
Wilberforce was weak as a child with poor eyesight. His bad health troubled him all through his life. During the last years, he became gravely ill. His eyesight was also failing.
In 1833, he suffered from a severe attack of influenza from which he never recovered. Just three days after the Bill for Abolition of Slavery was passed in the House of Commons, Wilberforce died on July 29, 1833.
His life and works have been commemorated worldwide. Statues, busts and plaques of him adorn different sites. Churches within the Anglican Communion commemorated his work by introducing him in their liturgical calendars. A university in Ohio is named after him. His house in Hull has been converted into Britain’s first slavery museum. 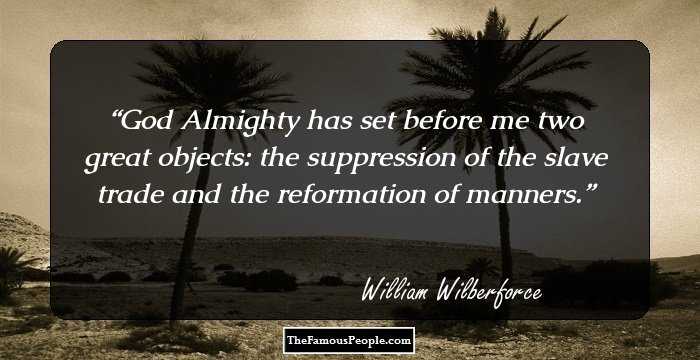 Quotes By William Wilberforce | Quote Of The Day | Top 100 Quotes

See the events in life of William Wilberforce in Chronological Order