(Pioneer of the American Animation Industry)

Walt Disney was a showman in the truest sense of the word. A pioneering force in the world of animation, he transformed the entertainment industry completely, with his innovative ideas and creative visions. In his over four-decade long career, he changed the way the world looked at animation and was solely responsible for ushering the golden age of animation. Starting off as a mere animator, he soon turned into a business magnate, eventually becoming a major figure in the American animation industry. He co-founded the Walt Disney Production, along with his brother, which went on to become one of the best motion picture producers of the world. The cartoon characters that we love to see today, such as Mickey Mouse, Donald Duck, Goofy, Pluto, are all the brainchild of this artistic inventor. In addition to his contribution in the field of animation, he was the mastermind behind the conceptualization and final formulation of Disneyland, an innovative theme park for children and adults alike. Till date, no other person has singularly contributed to the animation industry as Walt Disney has. To know more about his life and profile, read on. American Celebrities
Business People
T V & Movie Producers
American Men
American Entrepreneurs
Childhood & Early Life
Walter Elias ‘Walt’ Disney was born to Elias Disney and Flora Call Disney. His father was an Irish-Canadian by descent and his mother was a German-American. He had four siblings, three brothers and a sister.
At the age of four, he shifted base to Marceline, Missouri, with his family. It was here that he developed his life-long fascination for drawing and painting.
The family moved to Kansas City in 1911 where he received his early education. Walter Pfeiffer, theatre aficionado, became an early guiding light for him as he introduced young Disney to a world of vaudeville and motion pictures.
Moving to Chicago in 1917, he enrolled himself at the McKinley High School. At night, he used to attend course at the Chicago Art Institute. He worked as a cartoonist for his school newspaper.
Soon, he dropped out of school to join the Army but was rejected because he was underage. He then served as the driver of an ambulance for Red Cross. 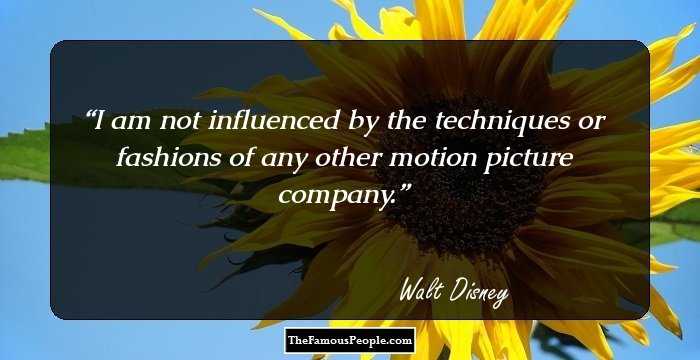 Continue Reading Below
Career
Moving back to Kansas City in 1919, started working at the Pesmen-Rubin Art Studio, as ad-writer. It was there that he met Ubbe Iwerks.
In 1920, he found employment with Kansas City Film Ad Company. His profile included making commercials from cutout animations. He developed an interest in animation and decided to become an animator.
However, finding true interest in cel animation, he left the company to start his own business venture. He offered employment to Fred Harman, who was his colleague at Kansas City Film Ad Company.
He entered into a business deal with a local theatre owner, Frank L Newman to screen the cartoons which he named, Laugh-o-Grams. The popularity of the cartoons led to the opening of Laugh-o-Grams studio. However, financial debt caused the closure of the studio in 1923.
Impervious to the bankruptcy, he aimed to set up a studio in California. Together with his brother Roy, and Iwerks, he opened Disney Brother’s Studio.
They entered into a distribution deal with New York distributor Margaret Winkler for Walt's 'Alice Comedies', an animated shorts based upon ‘Alice's Wonderland’. They invented a character, Oswald the Lucky Rabbit for which they contracted the shorts at $1,500 each.
In 1925, he recruited ink-and-paint artist Lillian Bound, little knowing then that the two would become lifelong partners.
The dream-run for Disney ended in 1928 when he realized that Universal Pictures had bought the trademark for Oswald and that most of his creative designers, except Iwerk, had forsaken him for the Universal Pictures.
Together with Iwerk, he worked on creating a new character, based on his pet mouse which he adopted during the Laugh-o-Gram days. The final touches to the sketch gave the world of animation a new character in Mickey Mouse.
Continue Reading Below
While the first two animated shorts did not bring Mickey Mouse much fame due to them being silent movies, the third short, was sound and music equipped became an instant success and created a sensation. Walt gave his voice for Mickey.
After the supper success of Mickey’s third short, Streamboat Willie, he launched sound in all of his subsequent cartoons.
In 1929, he released a series of musical shorts, titled ‘Silly Symphonies’, which featured Mickey’s friends, Donald Duck, Goofy, Pluto and Mickey’s girlfriend Minnie Mouse.
In 1933, he created his most memorable cartoon short, ‘The Three Little Pigs’. The cartoon was a big hit and garnered positive reviews. Furthermore, its anthem song, ‘Who’s Afraid of the Big Bad Wolf’ became an iconic number during the Great Depression.
In 1935, he created history by launching ‘Flowers and Trees’, then one of the most popular cartoon shorts, in color. For the same, he was bestowed with the prestigious Academy Award.
In 1934, he planned to come up with a full-length animation feature. People deemed it to be ‘Disney’s Folly’ and the mark of his downfall. His wife and brother even encouraged in talking him out of the project but in vain.
After a successful training schedule, his high-profile leap of a feature film titled, ‘Snow White and the Seven Dwarfs’, went into production in 1934. After three years, the film premiered at the Carthay Circle Theatre, Los Angeles.
‘Snow White and the Seven Dwarfs’ opened to public in February 1938. The film was a blockbuster at the box office and went on to become the most successful film of 1938. In its initial release, the film had grossed $8 million.
The grand success of Snow White not only catapulted the position of Disney in the world of animation but also brought about an era, which later was given the name as the Golden Age of Animation.
Continue Reading Below
Following the success of his first film, he started working on several others, including, ‘Pinnochio’, ‘Fantasia’, ‘Dumbo’ and ‘Bambi’. Simultaneously, the short staff continued to work on the characters of Mickey Mouse, Donald Duck, Goofy, and Pluto cartoon series
In 1939, he opened the Walt Disney Studios in Burbank. However, two years later, a strike by Disney Animators resulted in heavy losses for the studio as many of the animators resigned from work.
By 1950s, after stabilizing the financial condition of Walt Disney Studios, he started focussing again on feature films. The first to release was ‘Cinderella’ in 1950, which was followed by ‘Alice in Wonderland’, ‘Peter Pan’, ‘Treasure Island’, ‘Lady in the Tramp’, ‘Sleeping Beauty’ and ‘101 Dalmatians’.
A visit to Children’s fairyland in Oakland inspired him for the concept of Disneyland. After five years of immense planning, projecting, fund raising and execution, the grand opening of Disneyland Theme Park took place on July 17, 1955. The park primarily gave children and families to explore the world of fantasy. 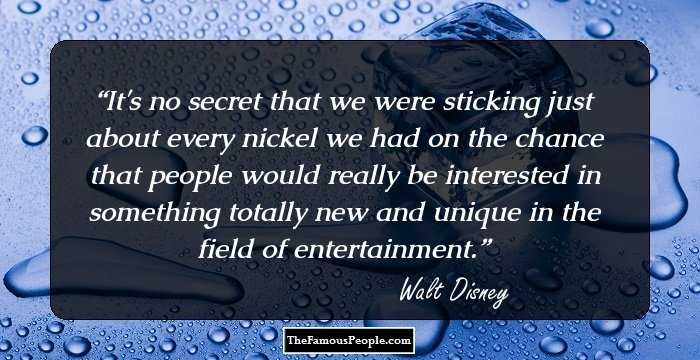 Major Works
He gave the world of animation a new ideology to work on and is believed to be responsible for the Golden Age of Animation. Most of the cartoon characters that we reckon today, Micky Mouse, Donald Duck, Goofy, and so on are the brain-child of this international icon, who became a major figure in the American animation industry in 20th century. Disneyland, the most popular theme park of the world, was also conceptualized and created by him.
Awards & Achievements
He received four honorary Academy Awards and twenty-two Academy Awards in his life for his distinguished works.
He was the proud recipient of seven Emmy awards. 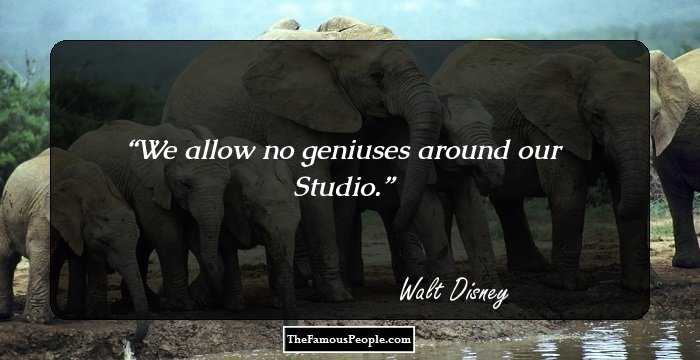 Personal Life & Legacy
He married Lillian Bound in 1925. The couple was blessed with a daughter, Diane Marie Disney in 1933. They adopted Sharon Mae Disney in 1936.
He died on December 15, 1966 due to lung cancer. Two days later, he was cremated and his ashes were interred at the Forest Lawn Memorial Park in Glendale, California.
Trivia
The Disneyland theme park located in US is the brainchild of this creative genius, who created ripples in the world of animation with his futuristic vision and immense ingenuity.

Quotes By Walt Disney | Quote Of The Day | Top 100 Quotes

See the events in life of Walt Disney in Chronological Order