Vince Carter is an American professional basketball player currently signed to the Sacramento Kings of the National Basketball Association (NBA). During his college years, he played three seasons at the University of North Carolina, helping his team reach the final four of the NCAA Tournament. He was selected as the fifth overall pick in the 1998 NBA draft by the Golden State Warriors, but was immediately traded to the Toronto Raptors. Since then he has played for a number of NBA teams, including New Jersey Nets, Orlando Magic, Phoenix Suns, Dallas Mavericks and Memphis Grizzlies. He has won a gold medal for representing the United States in the Summer Olympics. He has been named to the NBA All-Star team for a record eight times. Known for his exceptional dunking skills, he has earned nicknames like 'Vinsanity', 'Air Canada', and 'Half-Man, Half-Amazing'. Despite an overall successful career during which he has made numerous records, it is generally considered that his love for the game has gradually declined over the years. Repeated injury also played an important role during his early career. James Harden
Basketball Players #20
Sportspersons #85
DID WE MISS SOMEONE?
CLICK HERE AND TELL US
WE'LL MAKE SURE
THEY'RE HERE A.S.A.P
Quick Facts

American People
African American Men
Black Sportspersons
Basketball Players
Black Basketball Players
Childhood & Early Life
Vincent Lamar Carter was born on January 26, 1977 at Halifax Hospital in Daytona Beach, Florida to Vince and Michelle Carter. His parents divorced when he was only seven years old, following which his mother, a school teacher, remarried Harry Robinson, also a school teacher.
Young Carter was equally talented in music and sports, and was encouraged by his mother and stepfather to pursue both to have a well-rounded upbringing. Obsessed with basketball since he was only two, he set record by playing on Campbell Junior High School’s varsity basketball team as a starter in his seventh grade.
While studying at Mainland High School in Daytona Beach, he played alto, baritone, tenor saxophone in the marching band, led the band as drum major, as well as wrote the school's homecoming song. He was the captain of the school's volleyball team, led its basketball team to the 1994-95 Florida Class 6A championship and was a 1995 McDonald's All-American.
After completing his school graduation in 1995, he chose a basketball scholarship to the University of North Carolina. He played as part of coach Guthridge's 'Six Starters' system and helped his team win consecutive ACC Men's Basketball Tournament titles, as well as reach the Final Four of the NCAA Tournament twice.
He declared for the NBA draft in 1998, but continued his studies at North Carolina, from where he graduated with a degree in African-American studies in August 2000. 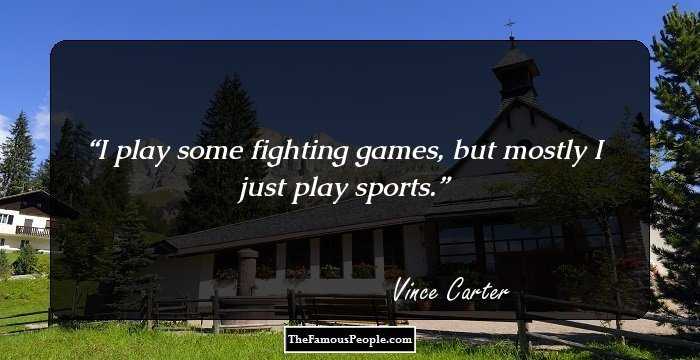 The Sexiest Men Of 2020, Ranked
Professional Career
In 1998, Vince Carter was the fifth-overall draft picked by the Golden State Warriors, but was traded to the Toronto Raptors where he earned the 'NBA Rookie of the Year Award' with 18.3 points average. He averaged 25.7 points in the following season and became a star for helping the team to their first ever play-off appearance in 2000.
He reached a new career high with 27.6 points in the 2000-01 season and helped his team win their first ever playoff series, advancing to Eastern Conference Semifinals, banking on a record 47 wins.
He signed a six-year contract extension in 2001, but missed the final 22 games of the 2001-02 season due to injury, which earned him reputation as a 'fragile player'.
He became the second player after Charles Barkley to register over 40 points, rebounds, five steals and five assists following the match against Denver Nuggets in December 2001.
He missed the 2002 NBA Playoffs due to injury and underwent surgery off-season, but only managed to play 43 and 73 games in the next two seasons.
Unhappy with the Raptors' management, Carter asked for a trade during the 2004-05 season, and was dealt to the New Jersey Nets on December 17, 2004. He played five seasons for the Nets, including four full seasons, during which he missed only 11 matches and helped the team to three straight playoff runs between 2005 and 2007.
He became the captain of the Nets during the 2007-08 season and in the following season, became the highest-scoring starting backcourt in the league alongside teammate Devin Harris. On November 21, 2008, he scripted the team's win over Toronto Raptors, bouncing back from an 18-point deficit.
He was traded to Orlando Magic on June 25, 2009 and helped the team reach the Eastern Conference Finals in February 2010, but failed to win the title. In the 2010-11 season, Phoenix Suns acquired him in a six-player trade, but he stayed there for a short period of time, during which he amassed 13.5 points average in 51 games.
His next team was Dallas Mavericks, with which he signed a three-year deal on December 12, 2011. During his time there, he became recognized for his 3-point shooting.
Continue Reading Below
On July 12, 2014, he signed a multi-year contract with Memphis Grizzlies, where he was awarded with the 'Twyman–Stokes Teammate of the Year Award' in the 2015–16 season. He reached the personal milestone of surpassing 24,000 career points as the 24th player in NBA history on November 1, 2016.
In 2017, at the age of 40, he made the NBA record of hitting six triples in one game. He moved to Sacramento Kings with a one year deal in July 2017, and in August 2017, was named the Most Influential Veteran by the NBA Players Association at the Players Voice Awards. 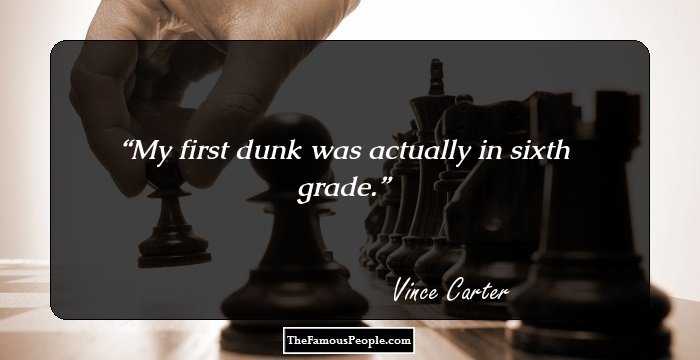 International Career
Vince Carter led the US team to a gold medal win during the 2000 Summer Olympics in Sydney. He was included in the USA roster for the 2003 FIBA Americas Tournament in place of Kobe Bryant, but gave away the spot due to injury, as well as marriage.
Major Works
Vince Carter is one of only six people in the history of NBA to achieve 20 points, 4 rebounds and 3 assists per game for 10 consecutive seasons. He also ranks among six players in the league’s history to register 24,000 points, 6,000 rebounds, 2,500 assists, 1,000 steals and 1,000 3-point field goals. 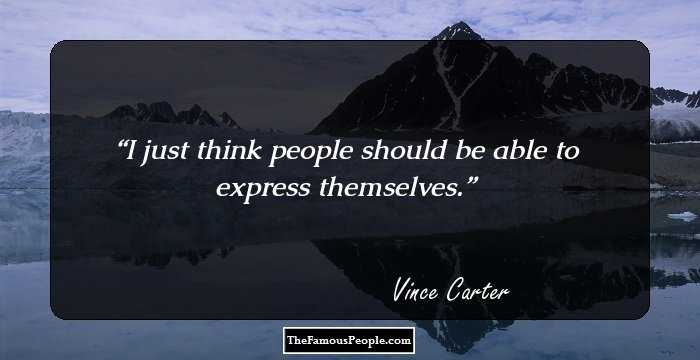 Quotes: Think
Awards & Achievements
Vince Carter won the 'NBA Rookie of the Year Award' in 1999 and was named to the NBA All-Star team eight times between 2000 and 2007. He also won the 'Twyman–Stokes Teammate of the Year Award' in 2016.
Personal Life & Legacy
Vince Carter married Ellen Rucker, a chiropractor, on July 3, 2004, and they had a daughter, Kai Michelle Carter, in June 2005. The couple eventually separated and divorced in 2006.
He is a charitable person who established the Embassy of Hope Foundation to assist needy children and their families in Florida, New Jersey and Toronto. He was recognized as 'Child Advocate of the Year' by the Children's Home Society and received the Florida Governor's 'Points of Light award' as well in 2007.
He also tried his luck at food business with the launch of the restaurant called 'Vince Carter's' in Daytona, Florida in January 2010. The restaurant closed its doors to the customers in February 2016.
Trivia
Volusia County declared Sunday, January 10, 2010 as Vince Carter and Michelle Carter-Scott Day. The then-President Barack Obama praised his playing style at a fundraiser event on February 23, 2012, referring back to his time playing for the Tar Heels.

Quotes By Vince Carter | Quote Of The Day | Top 100 Quotes

See the events in life of Vince Carter in Chronological Order 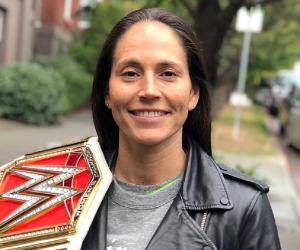