Trevor Martin is an American YouTube gamer best known for posting Call of Duty videos on his main gaming channel titled 'TmarTn'. He is also famous for running a second gaming channel titled ‘TmarTn2’ on which he posts let's play, gameplay and walkthrough videos for all kinds of video games. In addition, Martin has a vlogging channel called ‘Trev and Chels’ that he runs with his girlfriend Chelsea. He is a very hardworking young man and is constantly striving to improve his craft. It is only through his determination and dedication that he has made his channels count amongst the most watched gaming channels on the social platform. Today, these channels have more than 3.3 million and over 3.1 million subscribers respectively. They have earned billions of views as well. Talking about his vlog channel Trev and Chels, it also has hundreds of thousands of subscribers. On a personal note, Martin is incredibly passionate about playing videos games. The YouTuber also loves filming his everyday life. He is a guy who doesn’t shy away from being in front of the camera and in fact misses the device when he is unable to shoot. Fedmyster
Gamers #106
Instagram Stars #389
Continue Reading Below
4th September In History
DID WE MISS SOMEONE?
CLICK HERE AND TELL US
WE'LL MAKE SURE
THEY'RE HERE A.S.A.P
Quick Facts

American People
Florida YouTubers
Virgo Youtubers
Male Youtubers
American Gamers
Rise to Stardom
Trevor Martin launched his main channel 'TmarTn' in 2010. Since then, he has been uploading CoD (Call of Duty) videos on it. The best part of these gaming videos is that they are detailed and teach the audience how to play CoD in the most efficient manner.
Recommended Lists:

American YouTubers
Virgo Men
Two of the most popular CoD videos on the channel are ‘Infinity Ward and the next Call of Duty 2016' and 'Prop Hunt - Most Fun I've Had in CoD WW2'. One of the most recent videos shared by the YouTuber on his channel is titled 'Perks Confirmed in Black Ops 4'.
Coming to the YouTuber’s other channels, ‘TmarTn2’ was launched on August 21, 2010 while ‘Trev and Chels’ was started on February 21, 2016. The former channel has more than 3.1 million subscribers and features let’s play and gameplay videos related to almost all kinds of video games. It also has live game streams and gameplay lessons in detail.
Martin’s third channel, i.e. Trev and Chels, was launched by the YouTuber and his girlfriend in 2016. This collaborative channel features numerous vlogs related to Martin’s love life, friends, and travels. Talking about the popularity of this vlog channel, it has got over 445k subscribers (as of May 2018).
You May Like

Who Is The Most Popular BTS Member?
Continue Reading Below
Personal Life
Trevor Martin was born on September 4, 1992 at Daytona Beach, Florida, USA. Information about his parents is not available on the web. He studied finance in college. Owing to his career as a YouTube gamer, Martin receives advanced copies of the hottest video games. He has collaborated many times with numerous CoD YouTubers like Austin Pamajewon and Matt Haag. He is currently in a relationship with Chelsea Kreiner. 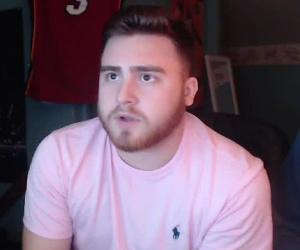