Terry Saban is an American philanthropist and teacher, also known as the wife of former football player and the current coach of the 'University of Alabama,' Nick Saban. The Fairmont, West Virginia native is a real example of a supportive and caring wife. Terry has played a significant role in Nick's career and has contributed to her husband's professional decisions. She is also Nick's philanthropy partner. Terry is the co-founder of Nick's non-profit organization, which is named after her late father-in-law. The two have supported several noble campaigns through their charity and other organizations. Terry and Nick also make donations to the communities that support their team. The grade-school sweethearts have now completed 50 years of togetherness. They two do not have any biological child but have two adopted children. Hillary Clinton
DID WE MISS SOMEONE?
CLICK HERE AND TELL US
WE'LL MAKE SURE
THEY'RE HERE A.S.A.P
Quick Facts
Family: 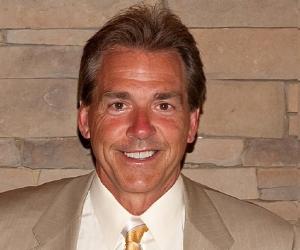 American People
American Female
Relationship with Nick
Terry and Nick were in seventh grade when they met each other for the first time at a 4-H science camp. However, they began dating officially after Nick went to ‘Kent State’ and Terry took up a teaching job in West Virginia after graduating college. They kept their long-distance relation strong with love letters and calls. Nick would always report his flying schedules to Terry over calls. Thus, the two still had an emotional connection, although they were not physically together.
Continue Reading Below
Married Life
Nick and Terry were 21 years old when they decided to marry. The wedding happened over a Christmas break, on December 18, 1971, while the two were still in college. Terry has been a supporting wife and a "great partner," as claimed by Nick. She is known as "Miss Terry" in Alabama's football circles. Terry plays a crucial role in Nick's professional decisions. She goes through all Nick's work-related calls and emails that are forwarded to her by his assistant. Throughout Nick's stint with ‘Louisiana State University’ (LSU), Terry was always approached for her opinion on his professional decisions. She even gets involved in recruiting players. Chris Black, the ‘Alabama’ player once told the media that Terry had more control over Nick's professional choices than Nick himself did. She is a regular at Nick's news conferences and cheers every time she agrees with any of his statements. Toward the end of Nick's last season with 'Alabama,' when the rumors of his transfer to Texas were surfacing, Terry gave an interview to the 'Wall Street Journal,' where she expressed her resentment toward 'Alabama' fans. In her view, Nick's excellent coaching had made 'Alabama' habituated to winning, which in turn made people ungrateful to Nick. She also spoke of her wish to move to Texas. She said that both of them wanted to end their career in Alabama, and hence, he might take up the Texas job, though Terry was happy with her school career in Alabama.
Besides supporting Nick in his career, Terry has also lent her unconditional love and support to her husband's philanthropic endeavors. She actively takes part in several noble causes across the country. Terry and Nick are the founders of a charity called 'Nick's Kids Fund.' The two founded the trust in 1998, during Nick's coaching stint at 'Michigan State University.' The charity fund was established to honor Nick's deceased father. Since then, the Saban couple has supported the charity even after they moved to focus on their professional lives at 'Louisiana State University,' the 'Miami Dolphins,' and now at the 'University of Alabama.' The charity works to raise funds to provide aid to families, teachers, and educational institutions dealing with mentally challenged children. In addition to raising funds through their charity, Nick and Terry personally donated $1 million to the 'First Generation Scholarship' at the 'University of Alabama.' They are significant sponsors of the 'St. Francis Saban Student Center' at the ‘St. Francis Catholic Church.’ With Nick and Terry's efforts and support, 'Nick's Kids Foundation' completed its four major projects. The foundation has donated $7 million to the community.
In 2005, Terry helped and made donations to the Hurricane Katrina relief fund, while Nick served as the 'Dolphins' coach in Miami. Terry teamed up with cheerleaders, former 'Dolphins' players, and the wives of players and coaches to raise funds for the relief campaign.
Family & Personal Life
Terry and Nick have adopted two children, son Nicholas and daughter Kristen. A few years back, Kristen was in the news after she was involved in a brawl with her sorority sister, Sarah Grimes. In 2013, the two became grandparents for the first time when Nicholas had a son. Like her husband, Terry is a devout Catholic who rarely misses attending the Mass.
In an interview, Terry once recalled a heart-touching moment with her father. It was about an incident in the early 1990s when Nick was the defensive coordinator for the 'Cleveland Browns' and had received a hefty bonus for winning a big championship. The amount meant a lot for them back then. Terry had made her own plans to utilize the amount, while Nick had planned something for Terry's father, who worked as a coal miner back then. She was overwhelmed to know that Nick had wanted to pay the entire amount to her father so that he could pay off for his mortgage. On Christmas that year, Nick presented Terry’s father a ‘Cleveland Browns’ jacket. Terry’s father found some papers in its pockets. Terry and her father then realized that Nick has already paid off their mortgage.