One of Hollywoodâ€™s most respected actresses, Susan Sarandon is a veteran artist with a career spanning over four decades. The critically acclaimed actress has appeared in movies like â€˜Bull Durhamâ€™, â€˜Thelma and Louiseâ€™ and â€˜Dead Man Walkingâ€™. Given her prolific acting career, smoking hot good looks and talents, it is hard to believe that she had never given a thought to acting as a career before she got married. She had accompanied her husband, Chris Sarandon to a casting call for the film â€˜Joeâ€™ and decided to audition. Though Chris did not get a part, Susan was given a major role in the film in which she made her Hollywood debut. â€˜Joeâ€™ was a critical and commercial success and she decided to pursue acting as a career. She also started doing television and appeared on the soap operas â€˜A World Apartâ€™ and â€˜Search for Tomorrowâ€™. She became a major film actress during the 1970s and got better with time. She received her first Academy Award nomination for â€˜Atlantic Cityâ€™ and won the Academy Award for Best Actress for her performance in the film â€˜Dead Man Walkingâ€™. She is a well known activist and has served as the UNICEF Goodwill Ambassador. She also actively supports progressive and left-liberal political causes. American People
American Women
New Yorkers Actresses
Libra Actresses
Women Activists
Childhood & Early Life
She was born as Susan Abigail Tomalin as the first of nine children to Lenora Marie and Philip Leslie Tomalin. Her father was an advertising executive and television producer. She is of mixed ancestry.
She graduated from Edison High School in 1964, and then attended the Catholic University of America till 1968. 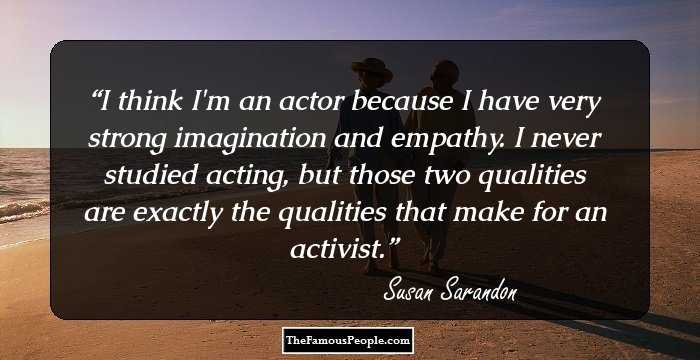 Quotes: Think, Never, I
Continue Reading Below
Career
She accompanied her husband Chris Sarandon whom she had wed in 1967 to a casting call for the movie �€˜Joe�€™. She decided to audition even though she had never before given a thought to acting as a career. She bagged a major supporting role in the film.
Her debut film, �€˜Joe�€™ was out in 1970. She played Melissa in the drama film which went on to become a critical as well as a commercial success. She received several film offers following this.
After appearing in various films over the early 1970s, she got her breakthrough role in 1975. She played Janet Weiss in the musical comedy horror, �€˜The Rocky Horror Picture Show�€™ which was a tribute to horror B movies.
In 1977 she played Catherine Alexander, a sweet and trusting young woman in the drama, �€˜The Other Side of Midnight�€™. The story revolves around a scheming air force pilot who attempts to murder his wife in order to be with his ex-girlfriend.
She played a young Canadian woman in the 1980 French Canadian romantic crime film, �€˜Atlantic City�€™. The film was a huge critical success which won several awards. Sarandon was nominated for the Academy Award for Best Actress for this role.
In 1983 she appeared along with Catherine Deneuve in the romantic horror film, �€˜The Hunger�€™ which was a love triangle between a doctor and a vampire couple. In spite of not being well received at the time of its release the film went on to achieve cult status.
She played Sandra Boon in the 1988 comedy film �€˜Sweet Hearts Dance�€™ which focused on the stories of two couples, one married for several years and the other at the beginning of their relationship.
Along with Geena Davis she acted in the adventure female buddy film, �€˜Thelma & Louise�€™ which was directed by Ridley Scott. The film was both a critical as well as a commercial success.
She portrayed Sister Helen Prejean in the crime drama �€˜Dead Man Walking�€™ in 1995. The film was co-produced and directed by Tim Robbins. It was a critically acclaimed film which earned several Academy Award nominations.
Continue Reading Below
In the film �€˜Cradle Will Rock�€™ (1999), she appeared along with Jack Cusack and Joan Cusack. The film is a fictionalized account of the original production of the musical �€˜The Cradle Will Rock�€™.
The prolific actress appeared in a number of films over the 2000s. Some of her best known movies for the decade include: �€˜Goodnight Moon�€™ (2001), �€˜Shall We Dance�€™ (2004), �€˜Speed Racer�€™ (2008), and �€˜The Lovely Bones�€™ (2009). 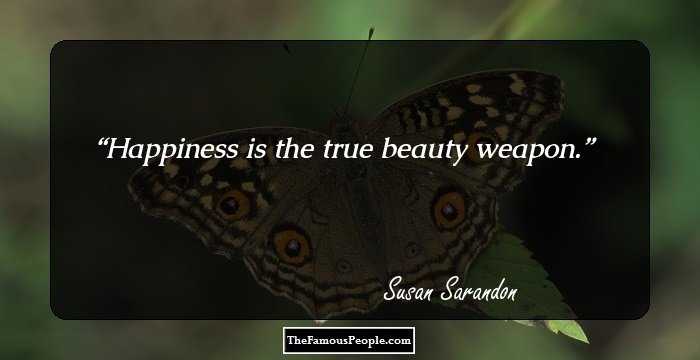 Quotes: Happiness
Major Works
She starred opposite Sean Penn in the crime drama �€˜Dead Man Walking�€™ in which she played the role of Sister Helen Prejean who forms a special bond with a death row inmate. She was much appreciated for this role which earned her several awards and accolades.
In the legal thriller �€˜The Client�€™, she played a recovering alcoholic lawyer hired to defend a man who unwittingly becomes involved in a murder case. She was nominated for an Academy Award for Best Actress for this role.
Awards & Achievements
She won the Academy Award for Best Actress for her portrayal of Sister Helen Prejean in the crime drama film �€˜Dead Man Walking�€™ in 1995. 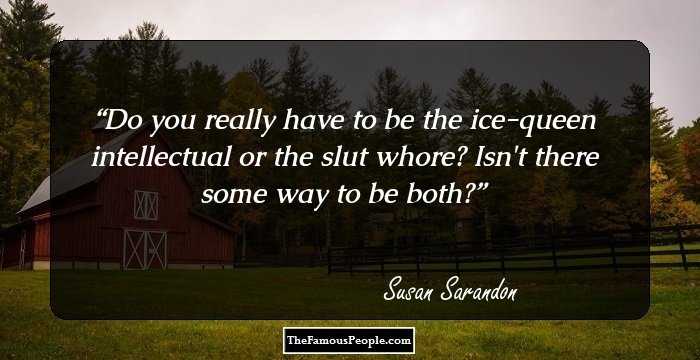 Quotes: You
Personal Life & Legacy
She married actor Chris Sarandon in 1967 and divorced him in 1979.
She had a relationship with the Italian filmmaker, Franco Amurri with whom she had a daughter in 1985.
She was in a long term relationship with actor Tim Robbins from 1988 to 2009. They had two sons.

See the events in life of Susan Sarandon in Chronological Order