(One of the Greatest Boxers of All Time)

Sugar Ray Robinson was one of the greatest boxing legends of the 20th century. A prodigious child, he took to sports at an early age, dropping out of school to pursue a career in the same when he was in ninth standard. And rest as they say is history. Match after match, he gave power packed performance within the ring and rose from his amateur status with two titles under his kitty. He stared his professional career in 1940, defeating each of his opponents in a crushing manner. From 1943 to 1951 he went on a 91-fight unbeaten streak, which is till date the third longest in professional boxing history. By 1951, he posed a professional record of 128–1–2 with 84 knockouts. He successfully held the Welterweight Championship title from 1946 to 1951 and thrice held the Middleweight Championship title in 1951, 1955 and 1958. No boxer in his league had an answer to his powerful and lightning fast paced punches. In his overall career, he was twice named ‘fighter of the year’. Interestingly, Robinson did not pursue a career in boxing alone and tried his hand in the entertainment industry as well, but without much success. American Celebrities
Black Boxers
Black Sportspersons
American Men
Taurus Boxers
Childhood & Early Life
Sugar Ray Robinson was born as Walker Smith Jr to Walker Smith Sr. and Leila Hurst at Ailey, Georgia. Among his siblings, he was the youngest and the only son of the couple.
His father worked as a cotton, peanut, and corn farmer and relocated to Detroit to take up work as a cement mixer and sewer worker in the construction business. His parents separated when he was young and eventually, he moved with his mother to New York City.
He attained his formal education from De Witt Clinton High School. Early in his life, he aspired to become a doctor but soon gave up on the idea after he dropped out of school in ninth standard. He then aimed to become a boxer.
After his attempt to enrol at a boxing tournament at the age of 15 was thrashed down due to age restriction of 18 years, he borrowed a birth certificate from his friend Ray Robinson.
Obtaining his AAU (Amateur Athletic Union) membership card, he started off by participating in his first fight in which he was complimented to be as sweet as sugar, which eventually led to his name, Sugar Ray Robinson.
His outstanding performance quickly helped him move up the ranks. He finished his amateur career on a strong note recording 85-0 with 69 knockouts, of which 40 came in the first round. Furthermore, he won the Golden Gloves featherweight championship in 1939 and followed it up by Golden Gloves lightweight championship in 1940. 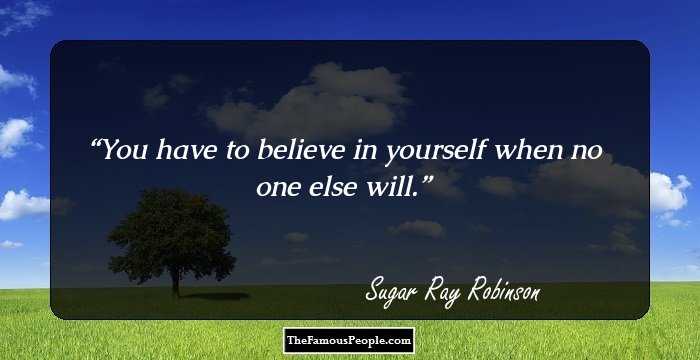 Quotes: You, Yourself, Will, Believe
Continue Reading Below
Career
He made his professional debut in October 1940 against Joe Evchevarria. The fight turned in his favour in the second round knockout as he outdid Echevarria to record his first victory as a professional boxer. The year proved successful for him as he recorded four victories in the five matches that he played.
His power packed performance in the boxing ring brought him immense limelight and fame as he recorded victories against world champion Sammy Angott, future champion Marty Servo and former champion Fritzie Zivic.
In 1942, his winning spree lasted for long as he recorded four back to back knockout triumphs. In October, he faced Jake LaMotta who went on to become his most challenging rival. He defeated LaMotta convincingly and went on to win four more fights. He finished the year with a 14-0 record, thus earning the ‘Fighter of the Year’ title.
His first ever defeat in his professional career came after 40 fights, against his top rivals, LaMotta. The loss did not prove to be detrimental to his career as he bounced back to form to record a victory against his childhood idol and former champion, Henry Armstrong.
In 1943, he was inducted in the US army. However, his military career did not last long as he was medically unfit and was relieved from his duties 15 months later. It was there that he befriended Louis for life.
By 1946, he had fought in 75 matches, out of which he won 73, losing one while one ended in a draw. Despite him being the top contender for the Welterweight championship, his lack of cooperation with the Mafia robbed him of his participation.
Eventually, in December, 1946, he was given a chance to win a title of Welterweight Championship in a fight against Tommy Bell and he won the match and the title. He defended his title in 1947 in a match against Jimmy Doyle.
In the following years, he fought 21 matches out of which two were title matches. The rest of the matches were non-title ones. While he won most of them, the fight against Henry Brimm ended in a draw.
In 1950, he yet again defended his Welterweight Championship title successfully in a fight against Charley Fusari. Having a successful professional bout, he moved to a more challenging middleweight championship.
Continue Reading Below
The same year, he knocked out Robert Villemain to gain the Pennsylvania state middleweight title. In his next matches, he defeated Jose Basora and Bobo Olson.
In 1951, he successfully defended his middleweight Championship title by winning a knockout fight against LaMotta in the 13th round. Following the victory, he embarked on a tour to Europe where he fought against European fighters such as Gerhard Hecht, Randolph Turpin and others.
In 1952, he faced his only knockout loss in the history of his career as he collapsed due to the immense temperature within the ring at the Maxim bout. Soon after the fight, he gave up his title and with this his career as well, finishing off with a record that stood at 131-3-1-1.
Following this, he ventured into the entertainment industry and tried his luck at show business. He switched to singing and tap dancing but lack of success in his performing career led him to take up boxing yet again. In 1954, he resumed training.
In 1955, he returned to the ring after a self-proclaimed hiatus of two years. Despite being out of touch, his performance was top notch. He went on to win several matches against top fighters and finally won against Bobo Olson to bag the Middleweight Championship title for a third time
In 1957, he failed to defend the title and lost the same to Gene Fullmer. However, the loss was momentary as he regained the title back, winning in a rematch against Fullmer, who had no answer for his lightening fast punches. The same was replicated later in the year when he first lost and then regained the title against Basilio.
Towards the end of the 1950s decade, he failed to defend his title in a match against Paul Pender. Following this, he lost several matches against Fullmer. Except for a few victories, his performance was affected towards the beginning of the 1960s decade as age played a crucial factor on his playing style. He lost to Joey Giardello, Moyer and others.
In November 1965, he finally announced his retirement. His record in the ring stood at 173-19-6, with 108 knockouts in 200 professional bouts. With such marvellous career record, he became the all-time leader of knockouts.
Post-retirement, he took to acting and was seen making appearances in a couple of shows such as ‘Land of the Giants’.
Continue Reading Below 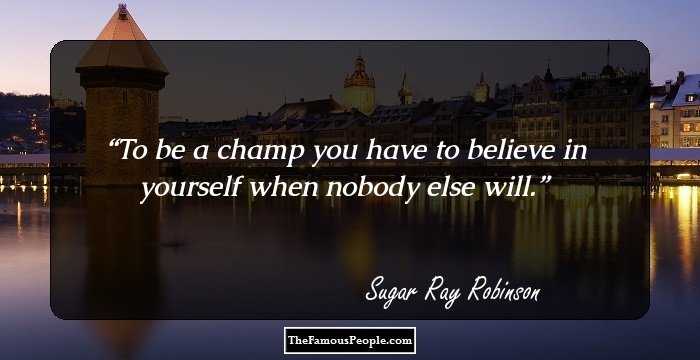 Quotes: You, Yourself, Will, Believe
Awards & Achievements
In his career, he twice won the ‘Fighter of the Year’ title for his performances in 1942 and 1951.
From 1946 to 1951, he held the Welterweight Championship title. In 1951, 1955 and 1958, he held the Middleweight Championship title.
In 1967, he was inducted into the International Boxing Hall of Fame.
Personal Life & Legacy
He first married in 1938 to Marjorie Joseph but the marriage was annulled the same year. They had a son Ronnie Smith born in 1939
In 1940, he met Edna Mae Holly, a club dancer. The two went into the wedlock in 1943. They were blessed with a son in 1949. The marriage did not work and the two separated in 1960.
In 1965, he tied the nuptials with Millie Wiggins Bruce. She allegedly is reported to have controlled him by keeping him under the influence of medication and drugs.
In 1969, he founded the Sugar Ray Robinson Youth Foundation for inner-city Los Angeles area.
During the later years of his life, he was diagnosed with diabetes mellitus and was treated with insulin. He then was diagnosed with Alzheimer’s disease.
He breathed his last on April 12, 1989 in Los Angeles and was interred in the Inglewood Park Cemetery, Inglewood, California.
In 1999, Associated Press named him as the ‘Welterweight of the Century’, ‘Middleweight of the Century’ and ‘Fighter of the Century’
In 2006, he was honoured by the United Postal Service which issued a commemorative postal stamp 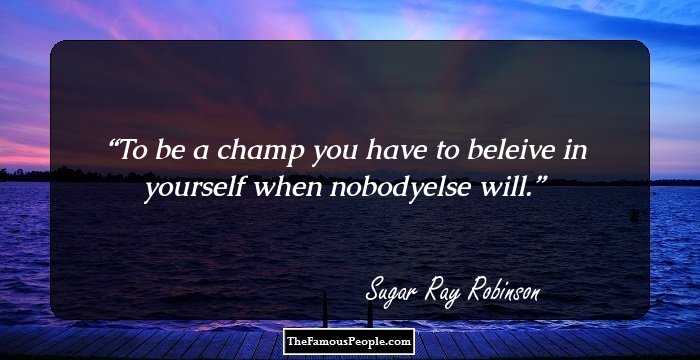 Quotes: You, Yourself, Will
Trivia
5-times World Middleweight Boxing Champion and World Welterweight Championship, he is the first American boxer to have an entourage. 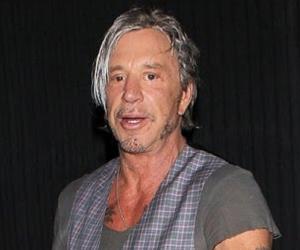