Bantu Stephen Biko was a South African philosopher and anti-apartheid activist known as the forefront leader of the Black Consciousness Movement, which spread like wildfire in 60s and 70s in many parts of Africa. His ideas regarding the state of black people in the times of colonialism and his general viewpoint of life are collected in a series of articles, where he used the name ‘Frank Talk’. He is known among one of the strongest historical African figures who inspired students of the county to be a part of the anti-racism movements and to fight for their rights. While studying in Lovedale School, he felt the waves of racism affecting black, coloured and Indian students, which encouraged him to start South African Students Organization. He became a victim of the anti-apartheid laws prevailing in the country as he was banned from public speeches in 1973, but Biko continued his struggle. He was finally arrested in 1976, after the South African government went all out on the Black Consciousness protestors. He was beaten to death in September 12, 1977. His funeral was a mega affair and delegates from Europe and USA attended it. South African Celebrities
Male Activists
South African Activists
Sagittarius Men
Childhood & Early Life
Bantu Stephen Biko was born in a poor South African family on 18th December 1946 to Mzingaye Biko and Alice Biko. His father worked as a policeman first, and later as a clerk, while his mother worked as a servant for the white people. Everything was right, until the family lost the father to sickness, when young Bantu was four-years-old. The responsibility of taking care of the family fell on his mother and she tried her best to provide means of survival to all her four children.
In school, Bantu was recognized as a very curious student, with an insatiable hunger to know more and more about the things that interested him. He soon got a chance to study in the prestigious boarding school, Lovedale, where his brother Khaya also studied. The brothers were then accused of supporting Pan-Africanist Congress, an armed nationalist organization which the South African government had banned. Khaya and Steve were expelled from Lovedale. Steve later went on to study medicine in St. Francis College, where most of his political affiliations developed.
It was at St. Francis that Steve started to oppose the colonist white South African government, and joined protests demanding a government which was in resonance with the black community, the majority population in South Africa.
Continue Reading Below
You May Like

Who Is The Most Popular BTS Member?
Activism
Steve Biko attended the University of Natal in 1966 to study medicine as soon as he got out of the high school. At the university, he experienced the racial discrimination based on the skin colour and the dangerous level of white supremacy that prevailed. The need for a separate organization for ‘coloured’ students led to the formation of the National Union for South African Students, and Steve joined it in 1966.
In 1968, Steve co-founded a separate organization with the name of South African Students’ Organization and anti-apartheid became their main agenda, a government policy which subtly put white skinned people over others. SASO demanded equal rights for black, coloured and Indian students and hence, the Black Consciousness movement achieved humongous support through SASO.
It took Steve just one full year to reach the top of organization and become its president. After naming the new president, SASO went all out with their speeches and movements, which shook the South African anti-apartheid sensibilities to their core. His influence was breaking barriers and it reached a point when the University of Natal had to expel him in 1972.
Steve made his intentions clear in the same year when he came up with another group named Black People’s Convention and became its leader. All through the 70s the group became bigger and bigger and came ahead as the sole hope for black people to gain their rights back. In 1973, the government forced a ban on Steve. According to the ban, he was not supposed to speak in public, give interviews, write columns among other restrictions.
As a result of the ban, the operations at SASO halted for a brief period of time, before the group became active once again in mid 70s and their leaders started working undercover. In order to fund the family welfare of political activists, Steve created the Zimele Trust, which further established trust of black people in him and his influence grew further.
His growing popularity became a headache for the South African government and Steve was arrested several times on charges of being anti national. In August 1977, Steve was arrested for the last time and was held in Port Elizabeth.
Death
Steve was arrested in August 1977. A month later in September 1977, Steve was found severely beaten and all naked in Pretoria, hundreds of miles away from the place he was supposedly held a prisoner. He died the very next day, on 12th September due to brain haemorrhage, which was a result of severe beating he received in prison by the police. The news about his death spread like wildfire and several protests erupted out, shaking the South African government to its root.
The policemen accused of beating were never charged for anything and 20 years later, the same policemen accepted beating Steve to death. Before his death, Steve had already done all that was needed to be done and became an immortal anti-apartheid icon for South Africa.
Personal Life
Steve Biko has been frequently described as a tall, well built and handsome man and girls loved him. Biko, his associates and other activists refused luxury and said that most of their black brothers and sisters can’t even have the basic means of survival, so there is no morality in living an overly comfortable life.
He was popular among girls, both white and black, and was frequently mentioned as a womaniser, but he settled down in December 1970 after marrying Ntsiki Mashalaba and the couple became parents to two children. Ntsiki was aware of Steve’s several extra-marital affairs, and she had already filed for a divorce before he died in 1977.
You May Like

See the events in life of Steve Biko in Chronological Order 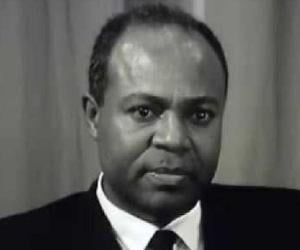