American actress Stella Adler was one of the foremost influences on contemporary acting, who dedicated her life to understanding theatre. A prodigious child, acting ran in her blood and veins as she was born to Yiddish theatre actors, Jacob and Sarah Adler. Making her stage debut at the age of four, Stella Adler soon found her way to the top. She starred in numerous plays in her home production, Independent Yiddish Art Company and later on featured herself in Broadway and Hollywood as well. Interestingly, Adler was luckily the chosen few who got a chance to work with the legendary Russian actor and director, Konstantin Stanislavski. He was not only a major influence on her but changed her line of belief thus, exchanging method acting for emotional content. In 1949, she founded Stella Adler Studio of Acting. The aim behind the foundation was to impart the best of what she had learned at Yiddish Theatre, Broadway, Hollywood and Stanislavsky. She was instrumental in teaching famous personalities of the future including Marlon Brando, Judy Garland, Elizabeth Taylor, Dolores del Río, Robert De Niro, Elaine Stritch, Martin Sheen, Manu Tupou, Harvey Keitel, Melanie Griffith, Peter Bogdanovich and Warren Beatty. Interestingly, even after more than half a century after its foundation, her teaching at the Stella Adler Studio of Acting has dominated the American acting till date.

Kelly McGillis
Actresses #3932
Directors #1021
Theater Personalities #20
Continue Reading Below
DID WE MISS SOMEONE?
CLICK HERE AND TELL US
WE'LL MAKE SURE
THEY'RE HERE A.S.A.P
Quick Facts

American Celebrities
Actresses
Directors
Theater Personalities
American Women
Childhood & Early Life
Stella Adler was born to the actor couple, Sara and Jacob P. Adler, in New York City. She had five siblings, all of whom followed their parents’ footsteps and were professional actors.
Her parents co-founded the Independent Yiddish Art Company to promote Yiddish Theatre in the early 20th century United States. At the age of four, she joined them by making her stage debut in one of her father’s productions, ‘Broken Hearts’.
Born in a family of professional actors, acting came naturally to the talented young girl who further polished her skills by watching other actors and learning through observation.
Her continuous and active participation in acting and drama left her with little time to attain formal education. Nevertheless, she attended public schools and New York University as and when work permitted. 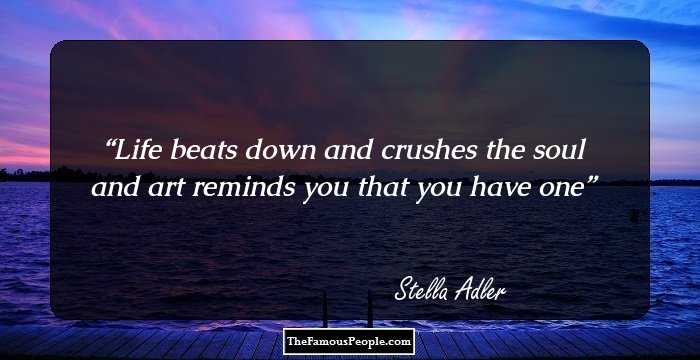 Quotes: You, Life, Art, Soul
Continue Reading Below
You May Like

New Yorkers Actresses
Aquarius Actresses
American Actresses
American Directors
Career
Her first major breakthrough in stage was in London for the play, Elisa Ben Avia, wherein she played the character of Naomi. Produced by her father’s company, the show lasted for a year after which she made returned to New York.
In 1922, she made her English language debut with the Broadway play ‘The World We Live In’ as the Butterfly. She also spent a season in vaudeville circuit.
The visit by the famous Russian actor-director Konstantin Stanislavski and his troop, Moscow Art Theatre, was instrumental in casting a powerful influence over her and shaping much of her future career.
In 1925, she became a part of the American Laboratory Theatre. Here, she was exposed to Stanislavski’s theories and his art style.
Six years later, she joined the Group Theatre, New York, which was founded by Harold Cluman, Lee Strasberg and Cheryl Crawford. She worked for different plays, including, ‘Success Story’, ‘Awake and Sing!’, ‘Paradise Lost’ and ‘Golden Boy And More to Give to People’
In 1934, she relocated to Paris along with Cluman to indulge in study sessions with Stanislavski, thus becoming the chosen few who bragged about having such a chance.
Until then, members of the Group Theatre including Adler concentrated on method acting. Stanislavski stressed on the use of imagination rather than memory, while acting. She returned to Russia and started teaching acting classes to members of the Group Theatre troupe.
In 1937, she moved to Hollywood and acted in a variety of films for six years, under the pseudonym of Stella Ardler. Meanwhile, she would return to Group Theatre occasionally until the latter finally disbanded in 1941.
Her stint in Hollywood was not a successful one as she did not bag important roles as she did in theatre. It was the sheer lack of quality in the roles that led her to return to stage in the early 1940s, acting and directing on Broadway.
Continue Reading Below
She returned to New York City and took up the profile of a teacher at Erwin Piscator's Dramatic Workshop at the New School for Social Research. In due course, she started acting and directing as well.
All through, she stressed on Stanislavski technique which stressed that the actors should not just search for meanings in the lines but in between them as well so as to portray the unspoken message. Only through this, one could enliven a character.
In 1949, she founded Stella Adler Studio of Acting. The school imparted the best of what she had learned at Yiddish Theatre, Broadway, Hollywood and Stanislavsky.
It was at Stella Adler Acting Studio that she mentored accomplished personalities like Marlon Brando, Judy Garland, Elizabeth Taylor, Dolores del R�o, Robert De Niro, Elaine Stritch, Martin Sheen, Manu Tupou, Harvey Keitel, Melanie Griffith, Peter Bogdanovich and Warren Beatty, teaching them about the principles of characterization and script.
Apart from teaching at her self-founded institute, she also taught at the New School and Yale School of Drama. Furthermore, she even led the undergraduate drama department at New York University and was one of America's leading acting teachers
In 1988, she turned to don the hat of a writer as well by coming out with her debut publication‘The Technique of Acting’. 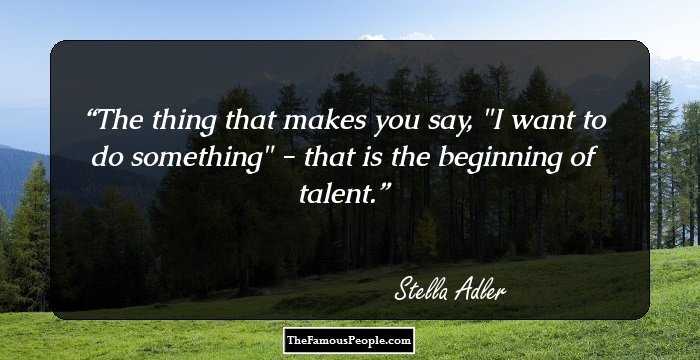 Female Film Directors
American Female Directors
Female Theater Personalities
American Theater Personalities
Personal Life & Legacy
It was during her first professional stint at London that she met Horace Eliascheff whom she later married. The couple was blessed with a child, Elle. The marriage, however, did not last long and was annulled.
In 1943, she tied the nuptial knot with one of the founders of the Group Theatre, Harold Cluman. This alliance too was not for the keeps as the couple parted ways in 1960.
She married for the third time to Mitchell A. Wilson. The marriage lasted until the latter’s death in 1973.
She breathed her last on December 21, 1992 in Los Angeles, California, due to heart failure. She was interred at the Mount Carmel Cemetery, New York.
She was honoured with a star on the Hollywood Walk of Fame in front of the Stella Adler Theatre at 6773 Hollywood Boulevard in 2006.
The acting schools founded by her are still operational in New York City and Los Angeles.
Recommended Lists:

Quotes By Stella Adler | Quote Of The Day | Top 100 Quotes

See the events in life of Stella Adler in Chronological Order