Siena Agudong is an American actor, best known for playing ‘Tiffany’ in ‘TV Land's ‘Teachers’ and ‘Natlee’ in ‘Nickelodeon's ‘Nicky, Ricky, Dicky & Dawn.’ Siena earned her real breakthrough with the recurring role of ‘Lulu Parker’ in the ‘ABC’ crime drama ‘Killer Women.’ She gained initial recognition playing the recurring role of ‘Natlee’ in the comedy series ‘Nicky, Ricky, Dicky & Dawn’ and strengthened her on-screen popularity with yet another recurring role, ‘Tiffany’ in the TV sitcom ‘Teachers.’ She presently plays ‘Sophia Miller,’ the lead role in the comedy TV series ‘Star Falls’ and ‘Nicole’ (aka ‘Nick’) in the comedy web series ‘No Good Nick.’ She has starred with football player Alex Morgan in the sports comedy film ‘Alex & Me.’ Siena has also made her mark on stage, with several plays. She has played the ‘Wicked Witch’ in ‘The Wizard of Oz.’ She has earned popularity on social media, too, through her ‘Instagram’ and ‘Twitter’ accounts and her self-titled ‘YouTube’ channel. Her ‘YouTube’ channel hosts sketch-comedy pieces and characters created by her, such as ‘Madame Rosa’ and ‘Mindy's Moments.’ American People
Theater Personalities
American Women
Hawaii Actresses
Leo Actresses
Career
Siena Agudong essayed the role of ‘Mindy,’ alongside Madison Iseman, in the 2013 film ‘Second Chances.’ That year, she got her big break with the recurring role of ‘Lulu Parker’ in the American crime-drama series ‘Killer Women.’ The series was broadcast on ‘ABC’ from January 7 to March 25, the following year. She caught attention playing .the recurring role of ‘Natlee’ in the American comedy series ‘Nicky, Ricky, Dicky and Dawn.’ She appeared in 19 episodes of the ‘Nickelodeon’ series, from 2015 to 2018 (seasons 2 to 4). Her performance as ‘Natlee’ won Siena a ‘Young Artist Award’ nomination in the category of ‘Best Performance in a TV Series – Recurring Young Actress’ at the ‘Young Artist Awards’ ceremony in 2016. She won the ‘Young Entertainer Award’ for ‘Guest Starring Young Actress 12 & Under - TV Series’ in 2017.
Meanwhile, she was cast in the recurring role of ‘Tiffany’ in the ‘TV Land’-aired sitcom ‘Teachers.’ The series premiered on January 13, 2016, and saw Siena essaying the role in three episodes, namely, ‘Duct Duct Goose’, ‘The Last Day,’ and ‘Playing the Partum.’ She features in the starring role of a strong-willed teenage girl named ‘Sophia Miller’ in the American comedy series ‘Star Falls.’ The series premiered on March 31, 2018, on ‘Nickelodeon’ and shifted to ‘TeenNick’ on August 5 the same year. Siena can also be seen playing the titular role of ‘Nicole’ (aka ‘Nick’), a teenage con artist with a secret plan, in the American comedy web series ‘No Good Nick .’ The first part of the series premiered on ‘Netflix’ on April 15, 2019.
Siena starred as ‘Reagan Wills’, along with American soccer player, ‘FIFA Women's World Cup’ champion, and ‘Olympic’ gold medalist Alex Morgan, in the American sports comedy ‘Alex & Me.’ It marked the acting debut of Morgan. It had a direct-to-video release by ‘Warner Bros. Home Entertainment’ on June 12, 2018. The film made its TV debut on September 15 that year on ‘Nickelodeon.’ Siena has also performed on stage on several occasions. She played the ‘Wicked Witch’ in a production of ‘The Wizard of Oz.’ She also played ‘Oompa Loompa’ in a production of ‘Willy Wonka.’ She has expanded her popularity on social media through different platforms such as ‘YouTube,’ ‘Twitter,’ and ‘Instagram.’ She launched her ‘YouTube’ channel on September 15, 2013, and it has already amassed thousands of subscribers and views. It includes sketch-comedy pieces and characters created by her. Her segments on ‘Madame Rosa’ and ‘Mindy's Moments’ are quite popular. She has also succeeded in accumulating a huge number of followers on her ‘Instagram’ account, ‘sienaagudong,’ and her ‘Twitter’ account, ‘sienaagudong.’
Recommended Lists:

American Actresses
Child And Teen Actresses
Female Child Actors
American Child Actors
Continue Reading Below
Family & Personal Life
Siena Agudong was born Siena Nicole Agudong, on August 19, 2004, in the US state of Hawaii, to Karen and Kenny. She has an older sister named Sydney. She is of Scottish, English, German, Filipino, and Irish ethnicity. She loves surfing and playing soccer. She is quite athletic and loves indoor rock climbing, too. She also likes to go to the beach with her family. She enjoys singing, dancing, and playing the drums. Siena is a huge animal lover and has raised a wild baby boar along with Sydney. Siena is known to be dating dancer, actor, and model Connor Finnerty since 2018.
Recommended Lists: 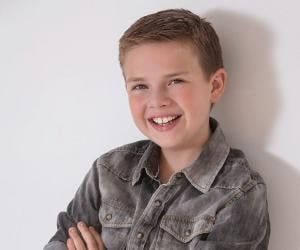