(Indian Professional Tennis Player and a Former Doubles World No. 1)

Sania Mirza is an Indian tennis star and one of the top doubles tennis players in the world. She is the most successful Indian female tennis player. Mirza burst into the scene as a prodigiously talented teenage tennis star and won several of tournaments in the Indian local circuit before breaking into the big time when she won the Girls’ Doubles title at Wimbledon. Mirza won a number of singles championships in the local circuit and also fared credibly in the Grand Slam singles circuit but she could not make the sort of progress that she would have liked. A wrist injury was also one of the reasons why her career went through a rough phase but post that injury she started concentrating on doubles and mixed doubles tournaments more than the singles events which led to her success in the Grand Slam tournaments. She had a very fruitful partnership with fellow Indian tennis star Mahesh Bhupathi in the mixed doubles and with Swiss great Martina Hingis at a later date. She is regarded as one of the finest doubles players in the world and without doubts one of the finest tennis players to have ever represented India. Goran Ivanisevic
DID WE MISS SOMEONE?
CLICK HERE AND TELL US
WE'LL MAKE SURE
THEY'RE HERE A.S.A.P
Quick Facts

Indian People
Women Sportspersons
Indian Sportspersons
Female Tennis Players
Scorpio Tennis Players
Childhood & Early Life
Sania Mirza was born in Mumbai, Maharashtra on 15 November 1986 to Imran Mirza and his wife Naseema Mirza. Her father was engaged in the construction business while her mother was in printing business. She has a younger sister.
The family moved from Mumbai to Hyderabad not long after Sania Mirza’s birth and it was in Hyderabad that she started learning lawn tennis from her father from the time she was only six year old. Mirza attended Nasr School in Hyderabad.
She graduated from St. Mary’s College but her real goal was to become a professional tennis player and to that end, she started taking part in tournaments in India. In 2001, she started playing in the ITF tournaments and the following year she won three titles to cement her credentials as an upcoming player. The following year she won a Bronze Medal in the Busan Asian Games in the mixed doubles.
Continue Reading Below
Career
She turned into a professional in 2003 and started playing in major tournaments. Subsequently, she won the Girls’ Doubles title at the Wimbledon Championships and the US Open Girls’ Doubles semi finals the same year. The same year, she also won 4 gold medals in the Afro-Asian games held in Hyderabad.
From 2004 onwards, she started to taste success in the WTA circuit and won a doubles title at the AP Tourism Hyderabad Open. Additionally, she won 6 singles titles in the ITF circuit as well. However, the following year, she performed particularly well in the Grand Slams as she reached the 3rd round of the Australian Open women’s singles tournament, 2nd round at Wimbledon and 4th round at the US Open. She was adjudged the ‘WTA Newcomer of the Year’ for the season.
In 2006, she became the first female from India to be seeded at a Grand Slam when she was seeded at the Australian Open, but she could not go far in the tournament. Other than a few notable wins, she could not go much ahead in singles event but at the US Open the following year she reached the quarter finals of both the women’s doubles as well as the mixed doubles events.
2008 was a year in which Sania Mirza suffered a wrist injury and her game suffered, as she pulled out of French Open and US Open tournaments. She did not participate at the Beijing Olympics as well but the following year she won her first Grand Slam, ‘Australian Open Mixed Doubles Title’ with Mahesh Bhupathi. Over the next few years, she kept struggling with the wrist injury due to which her game suffered.
Following a long string of poor results and first round exits in singles events, Mirza started concentrating more on doubles events in 2011 and the same year, she and her partner Elena Vesnina reached the final of the French Open. The following year, the duo of Mirza and Vesnina reached the semi finals at the Australian Open and won the French Open mixed doubles title with Mahesh Bhupathi.
In 2013, Mirza and Mattek-Sands won the Dubai Duty Free Tennis Championships but could not make a mark at the Grand Slams and Mirza started playing with a new partner, Cara Black. The pair was successful enough in reaching the advanced rounds of several tournaments the following year.
Mirza and Cara Black reached the semi finals of the US Open in 2014, but won the Mixed Doubles title with Bruno Soares. The same year, Mirza participated in the International Premier Tennis League and helped her team ‘Indian Aces’ in winning the league.
Mirza teamed up with Chinese player Hsieh Su-Wei in 2015 and then with Bethanie Mattek Sands but her partnership with Martina Hingis proved to be an inspired decision and they won in Indian Wells and at the 2015 Miami Open.
In 2015 Mirza partnered with Hingis to win at Wimbledon in straight sets and that constituted her first Grand Slam win in women’s doubles. They also won the 2015 WTA Finals and followed it up with the US Open in the same year. The following year, the Mirza-Hingis duo won the Australian Open Women’s doubles championship.
Awards & Achievements
Mirza was awarded the Arjuna Award from the Government of India in 2004.
In 2006, Mirza was awarded the Padma Shri by the Government of India. It is the 4th highest civilian honour in India.
In 2015, she was honored with Rajiv Gandhi KhelRatna Award and a year later she was awarded the Padma Bhushan, India’s 3rd highest civilian honour.
Personal Life & Legacy
Sania Mirza was engaged to be married to a wealthy businessman named Sohrab Mirza in 2009, but the wedding was cancelled the same year.
On April12, 2010 Mirza got married to Pakistani cricketer Shoaib Malik. The couple has no children.

See the events in life of Sania Mirza in Chronological Order 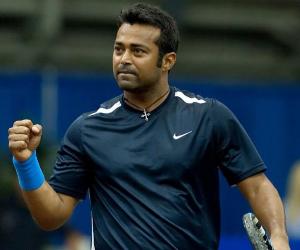