Saint Anne was the mother of Virgin Mary and grandmother of Jesus Christ. She is considered a saint because of her role as the grandmother of Christ as well as for being a pious and devout servant of the almighty. Born in c. 50 BC, possibly as Hannah from the House of David, she is believed to have birthed Mother Mary from Immaculate Conception. Saint Anne, however, later became the subject of a controversy that questioned her virginity. According to Christian beliefs, she and her spouse Joachim prayed to God to bless them with a child after going through years of childlessness. They were visited by an angel who promised them a child who would be born of Immaculate Conception. After Anne gave birth to Mary, she dedicated her to God's service as promised and never saw her again. She acquired the title of saint centuries later and is still venerated in the Orthodox churches.
Continue Reading Below 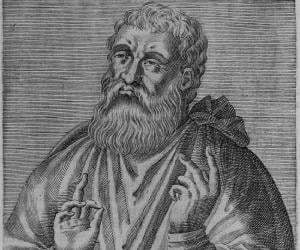 Chaitanya Mahap...
Annes Story & Beliefs
Saint Anne is not mentioned in the canonical books of the New Testament. She is, however, mentioned in the apocryphal Gospel of James. An ancient belief states that she married once. The legends of the late middle ages claimed that she was married thrice, first to Joachim and then to Clopas, and lastly to Solomas. Each of her marriages produced a daughter named Mary (Virgin Mary), Mary of Clopas, and Mary Salome, respectively.
In the fifteenth century, Johann Eck, a Catholic cleric stated that Anne's parents were named Emerentia and Stollanus. Her sister was Sobe; she was the mother of Elizabeth.
You May Like

The Sexiest Men Of 2020, Ranked
Continue Reading Below
Similarity to Hannahs Story
Saint Anne’s story bears a striking resemblance to the story of Hannah, mother of Samuel, who, also after being childless, was blessed by the priest Eli. She later gave birth to Samuel and dedicated him to God’s service. The similarity between Anne’s and Hannah’s stories led scholars to doubt them. However, such parallelism is hardly rare in biblical narratives. Other such stories of miraculous births to elderly mothers include Samson's birth to his parents, Isaac's birth to Sarah, and John the Baptist's birth to Elizabeth.
Veneration & Worship of Relics
Although Anne was not venerated in the western church until the late twelfth century, she received recognition in the eastern churches as early as the fourth century. Her canon was initially composed by Saint Theophanes. Later, Justinian I also dedicated a church to her. Today, there are many popular shrines and monasteries worldwide that have been established in her honor, including Basilica of Sainte-Anne-de-Beaupré in Quebec, Canada.
Anne, who is referred to as the Forbear of God in the Orthodox tradition, is commemorated every year. Roman Catholic churches celebrate her feast day on 26 July, while her eastern feast falls on 25 July. There is also a collective feast of Saint Anne and Saint Joachim on September 9.
St Anne was not venerated considerably by the Latin Church prior to the thirteenth century with the south of France being an exception. In southern France, her feast day was celebrated on 21 November 1378, in the fourteenth century, by Pope Urban VI. Later, the Latin Church accepted it in 1584.
According to Christian beliefs, her body was brought to southern France by Lazarus, a friend of Christ. Her head was supposedly kept at Mainz, Germany, from where it was stolen and was later placed in Düren in Rheinland. Today, her relics are said to have been preserved in several cathedrals and monasteries from all around the world.
Patronage
Saint Anne is the patron of unwed women, housewives, women who want to get pregnant or women in labor, as well as grandmothers, teachers, and educators. She is also said to be a patron of horseback riders, miners, and cabinet-makers. Her worship as the patron of miners is attributed to the fact that her womb was like a land where precious metals like Mother Mary were mined. St Anne is also is patron of sailors.
She is also the patron saint of Chinandega (Nicaragua), Brittany (France), Quebec (Canada), Norwich (Connecticut), Berlin (New Hampshire), Taos (New Mexico), Fasnia (Spain), Quezon (Philippines), and Saint Anne (Illinois), among many other places.
Controversies
Certain controversies have built up around Anne’s life. Debates have arisen as to whether she married once, twice, or thrice. Another controversy questions her virginity. In the fourth and the fifteenth century, she was believed to have brought Mary into the world by virgin birth. This belief was, however, condemned by the Catholic Church in 1677. According to the church, she gave birth in the normal fashion but was miraculously preserved from “original sin” so as to make her the “Forbear of God.” This concept of “Immaculate Conception” is often muddled with those of “Virgin Birth” or “Incarnation of Christ.”
Continue Reading Below
Iconography
In western iconography, Anne is often depicted in a red robe and green mantle, holding a book. Many of her images depict her holding Mary, who in turn holds baby Jesus. St. Anne is never shown at the Nativity of Christ. She is also not seen with the adult Jesus, giving rise to the belief that she probably died in her youth.
Anne and her husband Joachim are sometimes shown embracing each other at the "Golden Gate" of Jerusalem. The couple is aware of Anne's pregnancy after being informed by an angel. In Christianity, the scenarios wherein she is shown include Mary’s birth, the presentation of Mary, and the Virgin’s marriage.
Saint Anne in Islam
Anne, known as Hannah in Islam, receives a special mention in the religious texts. She is acknowledged as a highly spiritual woman as well as the mother of Mary. Although she is not named in the Quran, she is referred to there as the wife of 'Imran’ aka Joachim.
According to some texts of the Quran, she remained barren until her old age. During that phase, she suddenly wished for a child after seeing a bird feeding its baby. Hannah prayed for a child and finally conceived. Expecting the child to be male, she promised to dedicate him to the service of God. However, Hannah gave birth to a daughter and named her Mary. She regarded her as God's gift to her as she had wished for a son.
You May Like