When Indian cricketer Sachin Tendulkar made his test debut against Pakistan as a 16-year-old, little did the world know that the curly-haired teenager would one day become one of the greatest cricketers of the game. In his homeland, India, Sachin is more than just a popular sportsperson; he is considered an institution in himself. He is not just loved and respected, but revered. Fondly called the ‘God of Cricket’ by his fans, Sachin ruled the game for well over two decades—a very rare feat for a sportsperson. Widely considered to be one of the greatest batsmen ever, he is the only player to have scored 100 international centuries. Born into a middle-class family in Bombay, he started playing cricket while he was still a little boy, and made his international test debut at the age of 16! And thus began the journey of a cricketer who would smash several long-standing records and create new ones. Keeping in view his awesome performance, he was made the captain of the Indian team. Captaincy however did not suit him and he gave up captaincy. In spite of his iconic status, Sachin is known to be a simple and principled man, which further adds to his popularity. Rohit Sharma
DID WE MISS SOMEONE?
CLICK HERE AND TELL US
WE'LL MAKE SURE
THEY'RE HERE A.S.A.P
Quick Facts

Indian People
Indian Men
Taurus Cricketers
Indian Cricketers
Male Sportspersons
Childhood & Early Life
He was born on 24 April 1973, in Dadar, Bombay, Maharashtra, as the youngest of four siblings, to Ramesh Tendulkar, a Marathi novelist and Rajni, who worked in the insurance industry. He was named after his father’s favorite music director, Sachin Dev Burman.
As a young boy, he was a bully. His older brother encouraged him to play cricket in order to divert his attention from fights, and introduced him to Ramakant Achrekar who was a reputed cricket coach.
He went to ‘Sharadashram Vidyamandir High School,’ as suggested by Achrekar, as the school had a rich cricketing tradition. He shone as a star cricketer, playing for his school. Subsequently, he had people predicting that he would one day become a famous player.
Along with his friend Vinod Kambli, he was involved in a record 664-run partnership in an inter school match against ‘St. Xavier’s High School’ in 1988. 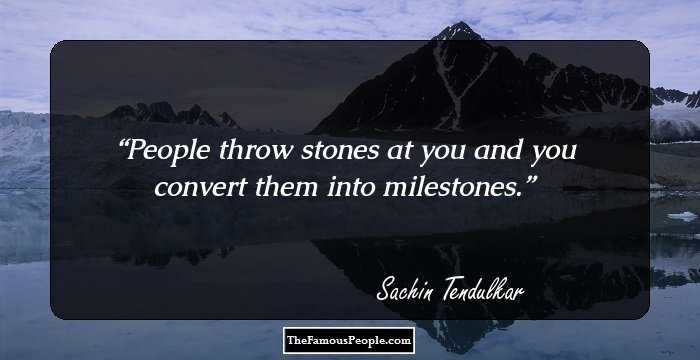 Quotes: You
Continue Reading Below
Career
He embarked on his domestic first-class career in 1988, playing for Mumbai and scored a century in his very first match. He ended the season as the highest run scorer.
Thanks to his impressive performance in first-class matches, he was soon selected for the national team. He made his international test debut against Pakistan in November 1989, aged just 16.
Even though he could not score many runs in the series, he got noticed both for his batting technique and his dedication to the sport. He also made his debut in One Day International (ODI) in 1989.
During the 1991-92 tour of Australia, he made 148 runs in one of the matches and 114 in another, batting against reputed bowlers like Merv Hughes, Craig McDermott, and Bruce Reid.
Asked to open the batting against New Zealand in an ODI in 1994, he set the stadium on fire, blasting 82 runs off just 49 balls. The very same year, he made his first ODI century against Australia.
In 1998, Australia was on a tour to India, and the series was hyped as ‘Sachin versus Warne’ contest. Sachin blasted Warne in the series, and made two centuries in the three-test series. Sachin played a vital role in India’s win in the series.
Sachin had two brief stints as captain of Indian cricket team, and both of them were not very successful. He took over as captain in 1996 but the team performed poorly, and he gave up captaincy in 1997. He was once again made the captain in 1999 but was not very successful and gave up captaincy the same year.
India was one of the favorites to win the 2003 ‘Cricket World Cup’ where he performed superbly, making 673 runs in 11 matches to help India reach the finals. The team however lost the finals to Australia, and Sachin was adjudged ‘Man of the Tournament.’
After going through a difficult phase, he regained his form in 2007, completing 11,000 test runs to become the leading run scorer from India. In the ‘Border-Gavaskar Trophy’ in 2007–08, he scored 493 runs in four tests, demonstrating his unbelievable batting skills.
Continue Reading Below
Sachin was once again at his best in the 2011 ‘World Cup’ during which he made 482 runs, including two centuries. India faced Sri Lanka in the finals and won the match—it was the first ‘World Cup’ victory for him.
His form faltered after the ‘World Cup,’ and he went through a lean phase. He retired from all forms of cricket in November 2013, and was given a very emotional farewell by his fans.
In 2014, he was appointed as the ‘Team Icon’ for the popular ‘IPL’ team ‘Mumbai Indians.’ He was also announced as the ambassador of the 2015 ‘ICC Cricket World Cup.’ 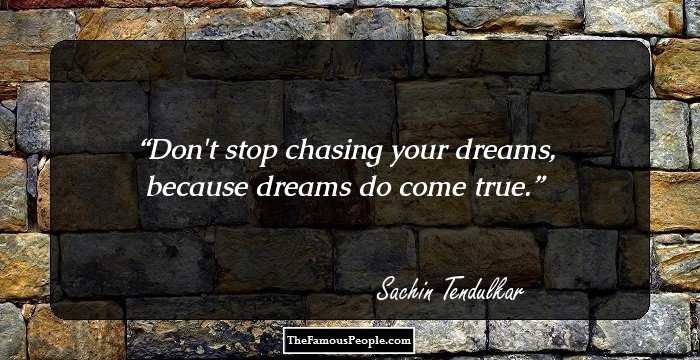 Quotes: Dreams
Awards & Achievements
Sachin is one of the most prolific cricketers ever—the first person to score a double century in ODIs, the only player to score 100 centuries, and the only player to have amassed over 30,000 runs in all forms of international cricket. It is no surprise that he occupies a legendary status in India.
Sachin Tendulkar holds the world record for scoring highest number of runs and centuries in both test cricket and one day internationals. He has scored 15,921 runs and 51 centuries in test cricket. In ODIs, he has scored 18,426 runs and 49 centuries.
He is the first person to score a double century in ODIs.
He is the only cricketer to have played 200 test matches so far.
In addition to the numerous cricketing awards that he has won, Sachin is also a proud recipient of several awards from the Government of India. He was awarded the ‘Rajiv Gandhi Khel Ratna,’ India’s highest sporting award, in 1997-98 for his achievements in cricket.
Continue Reading Below
He was honored with the ‘Bharat Ratna,’ India’s highest civilian award, in 2014 in recognition of his spectacular contributions to cricket. He became the first sportsperson as well as the youngest ever individual to receive the award.
Personal Life & Legacy
He met Anjali, a doctor, in 1990, and dated her for five years before tying the knot in 1995. The couple has two children. His son Arjun is also a cricketer.
He is actively involved with ‘Apnalaya,’ an NGO, and sponsors 200 underprivileged children every year. He has also used his popularity to help many other charities raise large amounts of funds for several noble causes, including cancer research and education. 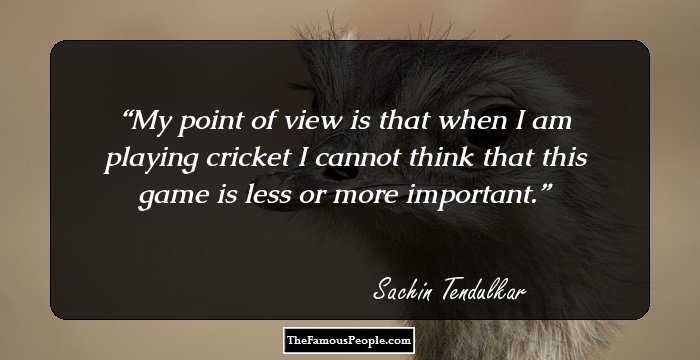 Quotes: Think, I
Trivia
At 40 years of age, this famous sportsperson became the youngest ever to receive the ‘Bharat Ratna.’
Top 10 Facts You Did Not Know About Sachin Tendulkar
As a young boy, Sachin Tendulkar wanted to become a fast bowler but was rejected by Dennis Lillee's ‘MRF Pace Foundation’ in 1987.
He served as a ball boy for the match between India and Zimbabwe at the ‘Wankhede Stadium’ during the 1987 ‘World Cup.’
What if someone told you that Sachin Tendulkar fielded for Pakistan in a match! Yes, you heard it right. Sachin Tendulkar fielded as a substitute during a one-day practice match against India at ‘Brabourne Stadium’ in 1987.
In his test debut against Pakistan, he wore the pads gifted to him by Sunil Gavaskar.
Sachin is ambidextrous; he is a right-handed batsman and bowler, but writes with his left hand.
He is a recipient of ‘Rajiv Gandhi Khel Ratna,’ ‘Arjuna Award,’ and ‘Padma Shri’— the only cricketer to have won all three of them.
He had a habit of sleepwalking as well as talking in his sleep.
He received a bottle of champagne when he won the man-of-the-match award for his first test ton in 1990. However, he was not allowed to pop it open as he was below 18 years!
As a popular cricketer, he endorsed several famous brands, but the first brand that he endorsed was the health drink 'Boost.'
He is the first sportsperson without an aviation background to be awarded the honorary rank of ‘Group Captain’ by the ‘Indian Air Force.’

Quotes By Sachin Tendulkar | Quote Of The Day | Top 100 Quotes

See the events in life of Sachin Tendulkar in Chronological Order 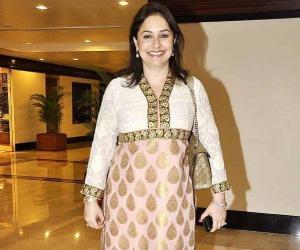